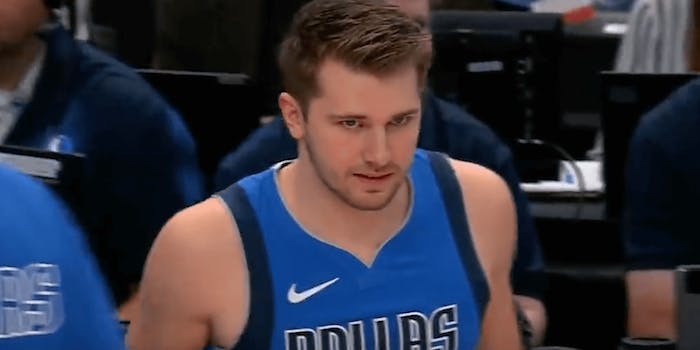 How to watch tonight’s fire Warriors vs. Mavericks matchup online

Watch Luka Doncic continue to blossom into a superstar.

NBA fans will be treated to a prime-time Luka Doncic showcase on Wednesday as the depleted Golden State Warriors pay the young and hungry Mavericks a visit at the American Airlines Center in downtown Dallas.

Perhaps showing his wares as one of the league’s top 15 players, Doncic, the second-year phenom, is currently averaging 29.5 points, 10.7 rebounds, and 9.3 assists per game—all which lead Dallas. He’s the only player in the top 10 in all three categories.

On Monday the Serbian became the second 20-year-old to notch a 40-point triple-double, after only LeBron James who was 163 days younger.

With a Warriors (2-12) low on talent, expect Doncic to put up ridiculous numbers in a prime-time setting that could officially launch both his mainstream MVP candidacy and marketing push as one of the league main faces.

Golden State Warriors vs. Dallas Mavericks: What to watch for

The major key for the game: The whole Warriors team appears to be somewhere on an injury list.

Most recently, the league reports (as of Nov. 16) that D’Angelo Russell will be re-evaluated in a couple of weeks after MRI results on his thumb came back positive for a sprain.

This team is already without Stephen Curry, Klay Thompson, and Kevon Looney, among others. Draymond Green appears to be healthy for the time being, but you get the feeling a “nagging injury” will keep him on the bench during the back third of the season.

Check out the author’s NBA podcast covering news of the last seven days in the league. We also dive James Harden’s dominance, Carmelo Anthony signing with Portland, and whether LeBron is the best (non-Olympic) athlete ever.