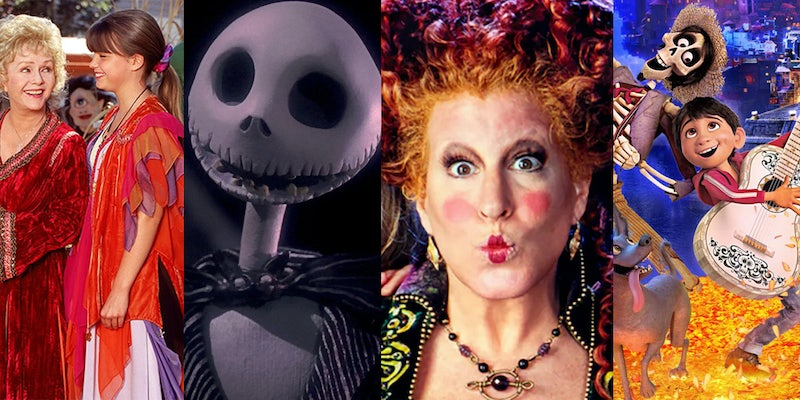 10 family-friendly Halloween movies to stream on Disney Plus

Not everyone is into the whole “spooky” thing.

I don’t care what anyone says, the second the calendar reads September 1, it’s officially Halloween season. It’s getting a little colder, the leaves are starting to change color, and the air is thick with pumpkin spice. Why not get in the Halloween spirit by streaming some of the best Disney Halloween movies?

Sure, there’s countless horror, thriller, and slasher movies, but not everyone is into that whole “dread” thing. Most especially, kids. We’ve compiled a list of movies you can watch with the whole family, available on the most family-friendly streaming service, Disney Plus. Some of these are outright Halloween movies. Others have elements of the season of spooky. Here are some of the best Halloween movies on Disney Plus.

The best Halloween movies on Disney Plus

Among family-friendly Halloween movies, there’s Hocus Pocus and there’s “the rest.” Bette Midler, Kathy Najimy, and Sarah Jessica Parker are three Salem witches who are brought back to life on Halloween night, 1993. And would you know it, they’re out to suck the lives out of children. It’s thrilling, it’s hilarious, and there’s even a toe-tapping musical number in the middle.

What if ghosts, witches, goblins, and all manner of Halloween monsters weren’t simply creatures from storybooks? The Halloweentown series posits an alternate dimension where all these fabled creatures live in harmony. The first three movies feature the legendary Debbie Reynolds as the proud matriarch of a magical family, who simply wants her typical suburban grandchildren to get in touch with their true heritage. It’s also got that classic Disney Channel Original Movie camp.

3) Beauty and the Beast

Fairytales weren’t written to simply delight children, but to paralyze them with fear. If you think about the story laid out in Beauty and the Beast for more than a few minutes, it’s actually pretty dark. A vain prince is turned into a monster, and his castle staff are turned into anthropomorphic household items. It’s best not to pull strings. Both the 1991 original and the live-action 2017 are available on Disney+, and they’re both worth a watch this Halloween season.

4) The Nightmare Before Christmas

Tim Burton is one of the spookier directors who is far more into the aesthetics of the season than he is true horror. Excluding Sweeney Todd, of course. The Nightmare Before Christmas is not only a fantastic Halloween movie, it doubles as a Christmas movie too. Jack Skellington, the King of Halloween is tired of being typecast and wants to branch out to reign over Christmas too. It’s got captivating stop-motion animation, and one of the best film soundtracks of all time, thanks to Danny Elfman.

Occasionally, even goofy Halloween family films deal with serious themes. One of Tim Burton’s first ever films was a 29-minute number called Frankenweenie. In it, a science wunderkind brings his beloved Bull Terrier Sparky back to life. What happens next isn’t far off from the classic Mary Shelley novel that inspired this movie. Burton later adapted his once short film into a longer stop-motion feature film. Both versions are available to stream on Disney Plus.

No holiday lore is half as vibrant as the one surrounding Day of the Dead, which is celebrated in Mexico ever November 1st. Pixar takes the established traditions of the holiday and the people who celebrate it, and makes its best film since Wall-E. Breathtaking world-building meets captivating storytelling, and a toe-tapping soundtrack combine to make a story that will render tears from viewers young and old.

The charming thing about Disney Channel original movies is that many of them went whole hog into totally weird ideas. In The Scream Team, Ian and Claire Carlyle recently moved to a dusky New England town to bury their recently deceased grandfather, only to discover that ghosts are real, and they’re haunting the town. A star-studded cast including Kathy Najimy, Tommy Davidson, and Eric Idle makes this one stand out. Also, a young and plucky Kat Dennings is there in a starring role.

8) James and the Giant Peach

Like most of Tim Burton’s properties, Roald Dahl stories always have a smack of spooky. James and the Giant Peach takes the classic children’s book and turns it into a stop-motion romp that peppers in a few live action scenes. I’m not saying it’s the best Roald Dahl book-to-movie adaptation, but it’s far from the worst.

The early ‘00s saw Eddie Murphy pivot from raunchy comedies to family-friendly features. And would you know it, Murphy is pretty funny even when he’s not in a fat suit. The movie is based on the popular Disneyland ride, and is half murder mystery, half ghost story. It’s engrossing enough that mom and dad won’t fall asleep by the third act in one of the best Disney Halloween movies.

10) Snow White and the Seven Dwarves

Disney’s first feature film became an instant landmark for excellence in a genre that previously wasn’t seen as much more than a novelty. And unlike most movies of the era, it still holds up. It’s one of the few Grimm fairytale adaptations that retains many of the darker overtones of the original story. There’s no jack-o-lanterns, but there’s one seriously spooky apple.