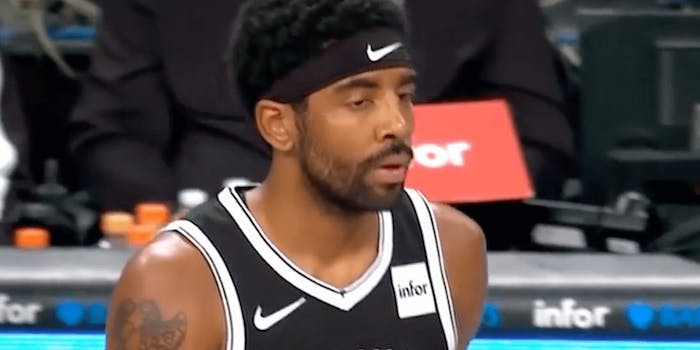 How to stream Rockets vs. Nets

How many points will be scored on Friday night?

The Houston Rockets and Brooklyn Nets, representing the present and potential future of the NBA, will square off in prime-time Friday at the Barclays Center in Brooklyn, New York.

Houston (3-1) comes off a game where 317 points were scored—in regulation. It came in a wonky 159-158 win over the Washington Wizards on Wednesday; however, the lack of any sort of notion of defensive intensity is highly concerning from the Rockets standpoint. James Harden scored 59 points, coming going 18 of 32 from the floor, 6 of 14 from three, with 17 makes in 18 free throw attempts. He also had nine assists in 37 minutes played. Russell Westbrook had just three points in the first three quarters, then scored 14 in the furious last stanza. He finished with his second triple-double of the season, which included 12 assists and 10 rebounds.

Brooklyn, on the other hand, appears to be a broken record coming off a 118-108 loss to the Indiana Pacers on Wednesday. Star point guard Kyrie Irving played well offensively—28 points, six assists, and seven rebounds, one turnover–but finished with a -15 plus/minus on the game, indicating below-average defense with him on the floor. Malcolm Brogdon feasted on Irving, finishing with 21 points and 13 assists. The former Milwaukee Bucks draft pick and rookie of the year leads the league in assists with over 11 a game.

Head coach Kenny Atkinson has talent on the roster and should be better given the exchange of D’Angelo Russell for Irving at lead guard. But the team’s defense hasn’t been up to last year’s standard. The Rockets duo of Westbrook and Harden will have easy picking in Brooklyn if Atkinson can’t ratchet up the intensity.

Here’s everything you need to know to stream Rockets vs. Nets.

Houston Rockets vs. Brooklyn Nets: What to watch for

The major key for the game: The news about Kyrie Irving’s mental makeup/wellbeing becoming an ongoing story.

ESPN’s Jackie MacMullan, as well-sourced as any reporters in the league, wrote broadly on Tuesday about the Brooklyn Nets’ near-past, exciting present, and unknown future. In the last third of the piece, she makes mention of intel concerning Irving’s ever-shifting moods.

“[Irving’s] infamous mood swings, confirmed by his ex-teammates, which followed him from Cleveland to Boston to Brooklyn, are the unspoken concern that makes Nets officials queasy,” she wrote. “When Irving lapses into these funks, he often shuts down, unwilling to communicate with the coaching staff, front office and, sometimes, even his teammates. Nets team sources say one such episode occurred during Brooklyn’s trip to China, leaving everyone scratching their heads as to what precipitated it.”

Nets sources say an episode happened on their trip to China, leaving the team confused, per Jackie MacMullan pic.twitter.com/Yu0xd8JRNI

During his press time on Tuesday, head coach Kenny Atkinson—who has some interesting thoughts in the article—came to Irving’s defense, saying MacMullan’s reporting was “completely false.”

The reality is that the story wasn’t about Irving’s mental health and that the passage was but a small piece of an excellent story on the state of a team on the brink. It will almost certainly be brought up during the national telecast and could wind up being a constant talking point depending on night-to-night performance. With Kevin Durant likely sidelined for the season, the microscope will be on Irving.

Check out the author’s NBA podcast covering the first week. Listen below.