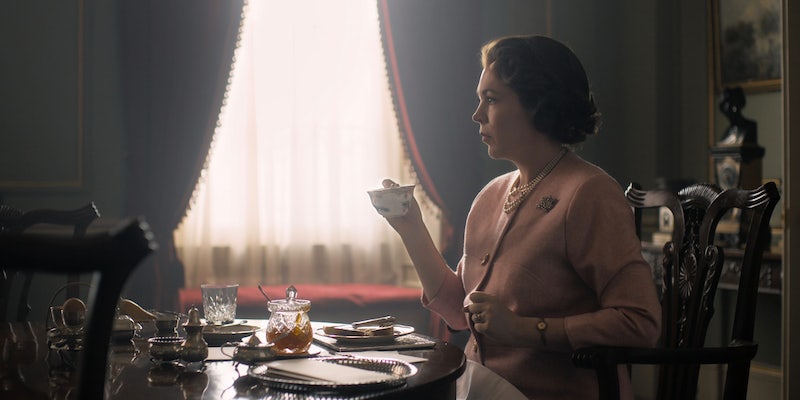 The monarchy will move forward with a whole new cast for season 3.

This article contains potential spoilers for The Crown season 3.

We won’t have to wait too much longer to watch more of The Crown.

A teaser posted to YouTube by Netflix reveals the first footage from season 3 of Netflix’s hit series, which solely features Olivia Colman as the long-reigning monarch. The clip is brief and largely focuses a glimpse into a slightly open door as Elizabeth, whose outfit is adorned with a blue sash and an extravagant crown, walks into frame and looks toward the camera.

At the end of the teaser, Netflix reveals the release date for its upcoming series: Nov. 17.

The second season followed the Royal Family through the scandals of the ‘60s, including the loss of yet another prime minister and Prince Philip’s inability to remain faithful to his wife. Princess Margaret finally got her fairytale wedding, and the Duke of Windsor—the Nazi sympathizer—was cast out the family once and for all.

Morgan has thankfully always planned for more seasons of the series, so fans of the show can expect to see the Royal Family age through the rest of the 20th century—just don’t get too attached to any of the cast.

On July 16, Netflix released the first photo of Olivia Colman as Queen Elizabeth II, which shows the queen wearing light pink, sitting at a table, and taking tea. The caption accompanying the photo on Twitter simply states “Patience.”

Here’s everything we know about The Crown season 3.

The Crown season 3 plot and news

Season 3 will pick up in the 1970s, according to Vanity Fair, instead of picking up where it left off in 1964 like it did in season 2. Lucky for fans who absolutely can’t wait until the next season to find out the fate of the Royal Family, everything needed to know can be found in a British history book (or the internet).

Producer Suzanne Mackie confirmed to Vanity Fair that the show will introduce Camilla Parker Bowles—Prince Charles’ second wife, who he dated before marrying Princess Diana—in season 3.  Charles met Parker Bowles, then Camilla Shand, at a polo match in 1971 and dated her until leaving for the Royal Navy in 1973.

Additionally, The Crown’s history consultant, Robert Lacey, told Town & Country that season 3 will see the disintegration of the marriage between Princess Margaret and Lord Snowdon, which culminated in their 1976 separation and 1978 divorce.

The Royal Family will also reckon with a death in the family. The Duke of Windsor died in 1972 and the Duchess of Windsor is said to have stayed at Buckingham Palace ahead of the duke’s funeral, which would make for a very intriguing episode.

It’s impossible to talk about the lives of the Royal Family without tying in the Monarchy’s impact around the world, so it seems likely that the series will follow the rapid decolonization of Africa and the Caribbean that took place, resulting in over 20 countries breaking away from the Commonwealth.

The captions from Netflix accompanying the photos read “Hope” for Princess Margaret and “Hurt” for Lord Snowden.

Bad news for fans of Claire Foy, who plays Queen Elizabeth: She won’t be a part of the series anymore. None of the original cast will be, actually. Morgan announced during the original making of the series that the cast will change every two seasons to allow the Royal Family to age appropriately.

So far, only the new Queen Elizabeth has been announced. Netflix announced 43-year-old Broadchurch star Olivia Colman will play the monarch for seasons 3 and 4.

“[Foy] said I’ll have a lovely time, everyone on it is amazing; the voice coaching is impeccable,” Colman told the BBC. “They were all amazing, so I’m just full of fear because you don’t want to be the one who screws it up. She’s lovely and she said I can call her anytime . . . I’m basically going to re-watch every episode and copy her.”

Helena Bonham Carter, the beloved actress from the Harry Potter franchise and several films with her ex-partner Tim Burton, is “all but confirmed” to play Princess Margaret in The Crown season 3, according to the Evening Standard. Princess Margaret’s relationship with Anthony Armstrong-Jones was a focal point of season 2, leading to some of its most sensual and scandalous scenes, and as mentioned above, season 3 will detail its unraveling.

“If it’s the person it could be, I was just totally flattered I thought, ‘How marvelous,’” he said. “If it’s the person I think it might be, and he’s incredibly handsome as well. I have morphed into someone far better looking than I.”

TV veteran Tobias Menzies (Game of Thrones, Rome, Outlander, The Terror) has been cast to portray Prince Philip in season 3 of The Crown after Paul Bettany stepped away from negotiations with Netflix.

Netflix revealed in a short teaser posted on Aug. 12 that The Crown season 3 will drop on Netflix Nov. 17.