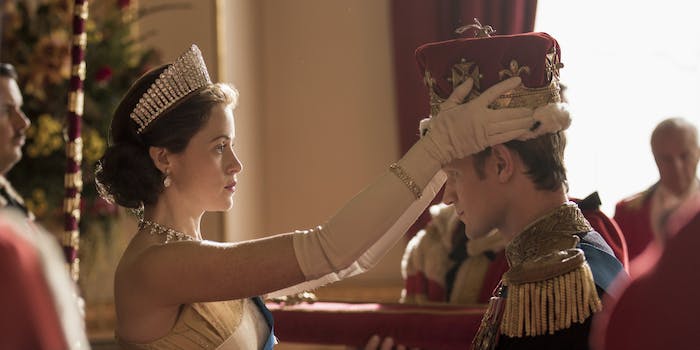 The Netflix series has major problems.

You have to respect an artist who stands by their creative vision. The Crown‘s first season faced criticism for letting male characters overshadow the Queen, and showrunner Peter Morgan apparently saw that criticism and thought, “Nah.” Season 2 of the popular Netflix series doubles down with even more screentime for Philip (Matt Smith), now cheating on his quietly loyal wife Queen Elizabeth II (Claire Foy).

Politics aside (we’ll get to that in a moment), The Crown has a weird attitude to its protagonist. Elizabeth is astonishingly passive, with little dialogue or agency in her own story. In theory, this is an interesting perspective. The Queen is simultaneously powerful and powerless, forbidden from influencing political decisions or expressing her opinions publicly. That could be the basis for a tense psychological drama like Pablo Larrain’s Jackie, but The Crown just isn’t that smart. Elizabeth spends a lot of time sitting around and suffering, while more interesting stuff happens to her husband, her sister Margaret (Vanessa Kirby), and Philip’s bad-boy sidekick Mike Parker (Daniel Ings).

Season 2 covers the late 1950s to early ’60s, beginning with the Suez Crisis and ending with the Profumo Affair. Philip starts the season with a five-month tour of the Commonwealth, allowing him to flirt with plenty of foreign women. (They carefully avoid showing him have sex, but the message is clear.) Divorce isn’t an option, leaving the show in a tricky position. The royal marriage must survive another 50 years, so while The Crown touches on Philip’s philandering, it can’t go too far. Peter Morgan actually described their enduring relationship as a “triumph,” but it’s rather miserable to watch. The Good Wife, this is not.

The Crown has a complicated relationship with historical accuracy. Since many of its subjects are still alive, it has less creative leeway than something like The Tudors. Netflix doesn’t want to get sued for libel or alienate its target audience of British royalty fanatics. So, The Crown is painstakingly researched in terms of historical events and costumes. It fudges a few details to liven things up—a salacious letter here and an imaginary meeting there—but it’s most interesting to see which characters get fictionalized, and why.

One of the more effective choices is the flashback of Philip’s childhood at boarding school, contrasting with his son Prince Charles. Philip famously banished Charles to Gordonstoun, a brutal experience that scarred him for life. The Crown gives us a thoughtful perspective on the backstory behind Philip’s decision, but you need to remember that all this is public knowledge. Netflix is safe to explore this aspect of the royal family’s dark side because Charles discussed it publicly. Likewise, it’s easy to paint the Nazi-sympathising Edward VIII as a gossipy coward, because we already know he’s one of the “bad ones.” The other royals are as picturesque and apolitical as the cast of Downton Abbey.

Elizabeth receives relatively little fictionalization, and that turns out to be a problem. For the first few episodes, she doesn’t really… do anything. Her most meaningful achievement is a moment of polite disagreement with Anthony Eden, portrayed with extra hamminess by Jeremy Northam and his mustache. As the season wears on, you realize that Elizabeth’s passivity is an intentional choice, highlighting her lack of freedom—which is, to a certain extent, self-imposed. She’s dutiful and shy, holding the fort while Philip galavants with ballerinas, and various politicians resign in disgrace. Sadly, that doesn’t make for a very interesting protagonist. It’s also not a particularly fresh insight on Elizabeth and her public image as queen.

The one time they do stretch the truth to give Elizabeth a more active role, it’s for rather dubious reasons. Motivated by jealousy over Jackie Kennedy’s charm and poise, Elizabeth takes charge of a tricky political moment in Ghana. She resolves a dispute by dancing with President Kwame Nkrumah, resulting in copious praise from the media, and no further screentime for the collapse of British rule in Africa.

It was easy to identify season 1 as monarchist propaganda. Less so for season 2, partly because it offers a more critical depiction of the royals. Elizabeth and Philip’s marriage is chilly and fraught with tension; Margaret is miserable. Charles has a horrible childhood, and the Queen is trapped by public expectations. This just makes the propaganda more insidious.

By framing the story as a family drama, The Crown made a politically irresponsible choice. We’re invited to see royal life as a prison of boring duties and stifling pressure, but that’s only a half-truth. Yes, Elizabeth and her family endured constant scrutiny and personal conflicts, but they also upheld a system of oppression across the globe. This show had a perfect chance to inject some much-needed realism into our view of the British monarchy, and they blew it. “Historical accuracy” is meaningless if it’s trained on minute detail with no thought for big-picture thinking.

Just look at Philip’s Commonwealth tour. It’s an ideal opportunity to show Britain’s loosening grip on the Empire, contrasting with Philip’s hard-partying lifestyle and unearned wealth. Instead, we just see the symbolic rift between Philip and his distant wife, with a brief segue to show Philip’s gallantry when the yacht saves a stranded fisherman. Philip refuses to continue the voyage until the man is returned to his family, leading to a tearful reunion on the beach. The message is: Philip may be a cheat and a terrible father, but he’s also an upstanding gentleman. The focus always shrinks inward to the personal, rather than expanding to include some real political commentary.

Like its main characters, The Crown suffers from too much money. Season 1 had a ludicrous budget of £100 million ($133 million), and season 2 is thought to have cost more. Costumes and locations are one of the main attractions on this kind of show, so that budget paid for some absolutely gorgeous backdrops. However, it also funded a lot of unnecessary filler. Scenes frequently involve multiple rooms when they only need one. We get parades and parties and pointless montages that slow down the action. Lazily paced flashbacks appear when a line of dialogue would do.

Between the overzealous budget and the unpleasant political undertones, The Crown just isn’t as good as it should be. As a royal drama it’s disappointingly unsophisticated, with characters explaining their motives in implausibly plain terms. The only subtlety lies in Claire Foy’s performance. And in the moments where we catch a glimpse of the rotten heart of the monarchy, the show quickly eclipses it with a warm haze of nostalgia.