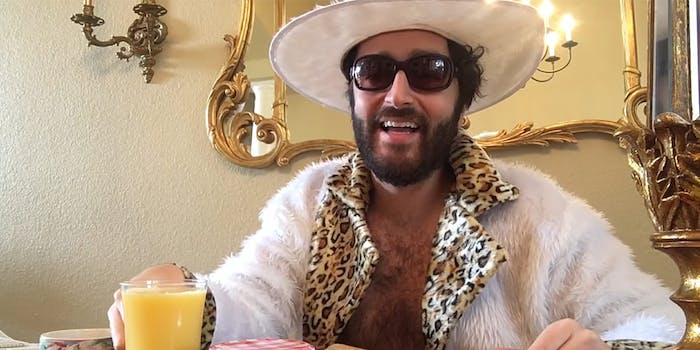 The court jester of crypto will see you now.

Arya Bahmanyar, 28, searched for “cheap Halloween costumes,” purchased an awful pimp getup, and his transformation into CoinDaddy was complete.

“I wore it and we started making songs,” the rapper tells the Daily Dot. “I literally have 40 songs.”

His anthems about blockchain technology and Bitcoin are self-aware, ridiculous, and actually kind of good despite the transparently borrowed ‘90s hip-hop ideas. He says he’s about that “crypto life,” and in some ways, his own rise to internet fame mirrors the ascent of cryptocurrencies: He used an old 13-inch MacBook Pro with Ableton Live to mine his career.

CoinDaddy makes all of his beats, writes the lyrics, and sings into a $20 microphone he bought from Amazon. Songs like “Blood vs. Crypto” are viral hits, and he dispenses them via Twitter, YouTube, and Patreon accounts. He describes his music as “Eminem meets Weird Al Yankovic,” something for everyone.

The outlandishness of CoinDaddy stands in stark contrast to the decentralized nature of Bitcoin and anonymity of its creator and some of its biggest benefactors. That’s helped turn him into something of a poster child for the cryptocurrency scene. A New York Times trend feature this month shined a light on CoinDaddy among the quirky revolutionary types getting rich on internet money, organizing in Slack chatrooms, and disrupting global markets with digital money.

CoinDaddy says he became a millionaire because he invested in Bitcoin in 2013 and then rode the bubble from there. Today, he’s a trader who spends most of his free time working on CoinDaddy. Mark Wahlberg’s production team and MTV have reached out about reality TV, he says.

CoinDaddy is, as he puts it, more of “an entertainer figure that came out of this random, bizarre subculture that nobody had really heard about until the Bitcoin price started going crazy.”

This week the price of a Bitcoin is more than $11,400. Like the hook in his best song goes, CoinDaddy is indeed “the player who got the blockchain tight.”

CoinDaddy says his parents are happy for his success, though they don’t really understand how he created value out of thin air.

“The internet is almost like this new shared continent that we all live on together, and this continent happened to create its own interesting form of money and then Wall Street and speculators came in,” he says.

CoinDaddy grew up in the Bay Area and studied international business at George Washington University. After college, he worked in real estate and moved to New York City, which is where a random Bitcoin meetup piqued his interest.

“I couldn’t believe that a bunch of nerds were literally trying to create their own money,” he adds.

He likes to riff on the notion that the cryptocurrency scene is populated primarily with awkward, Reddit-commenting introverts, but he’s serious about the technology’s potential—and about being front and center, versus some of the reclusive, libertarian tech bros he runs with.

“They’re trying to hide their money and I’m not trying to hide my money, I pay my taxes,” CoinDaddy says. “I think that living in fear is not a proper way of living life and it’s a self-defense mechanism because they just came into money.”

CoinDaddy loves the inclusive possibilities of the Bitcoin utopia. He says it’s hindered by speculative greed that keeps people out of the game with high transaction fees, but he adds that the upcoming lightning network will be a great equalizer. He doesn’t worry about Chinese and South Korean sanctions on the technology, either, comparing cryptocurrency to decentralized services like Napster and BitTorrent.

“It’s like a hydra, there’s nothing they can even do,” CoinDaddy says, defiantly. “We’re believers in the coin and we’re holding.”

For now, CoinDaddy will continue to be the bombastic hype man of the crypto scene. He’s planning shows in San Francisco, Paris, and Geneva this year at developer conferences and tech events, and he stresses that CoinDaddy is an exaggerated version of himself, “dialed up to 11.”

“Let’s create the most braggadocious, like, awful human being of a character that we could possibly create,” he says.

But CoinDaddy doesn’t seem like a bad guy. He wants you to get rich on crypto. He’s happy to tell you all about it with the exuberance of someone who’s drawing out a big idea on a whiteboard. Like Kanye West once wrote: Maybe you could be his intern, and in turn, he’ll show you how he cooked up summer in the winter.