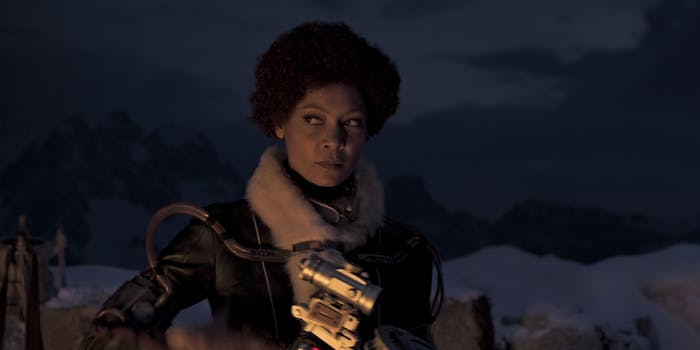 ‘You don’t kill off the first Black woman to ever have a real role in a Star Wars movie’: Thandiwe Newton criticizes her death in ‘Solo’

Thandiwe Newton was the first Black actress to land a major role in the Star Wars franchise, playing the sharp-shooting outlaw Val in Solo: A Star Wars Story. Three years on, she has some criticisms regarding how that role played out. Namely, the way that Val was killed off.

“You don’t kill off the first Black woman to ever have a real role in a Star Wars movie,” she said in a new interview with Inverse. “Like, are you fucking joking?”

Newton’s comments echo a common criticism of the film. When Solo came out, a lot of fans were displeased by Val’s death—not just due to the bad optics of killing off the only Black female character, but because Val’s role seemed oddly truncated. It felt different from the deaths in Rogue One, which were tragic but meaningful.

Focusing on Han Solo’s backstory, Solo sees Han and Chewie team up with a criminal named Tobias Beckett (Woody Harrelson), who is planning a heist alongside his wife Val. Her job involves setting a bomb to derail a train, but she gets caught by Imperial droids. Instead of escaping, she chooses to blow herself up—an act of self-sacrifice that feels rather inexplicable, because she doesn’t die to save anyone’s life, she dies to save the heist. As I wrote at the time, the emotional payoff just doesn’t work. Val’s death comes across as meaningless and preventable, and her husband only mourns her for a few scenes.

In this new Inverse interview, Thandiwe Newton revealed that “actually, in the script, she wasn’t killed. It happened during filming.” The original idea was for Val to fall off the train but potentially survive, leaving things open for Val to return. However this was changed during the film’s notoriously conflicted rewrite and re-shoot process.

Much of Solo was essentially filmed twice: Once by the original directors Phil Lord and Chris Miller, and then re-shot by their replacement Ron Howard, who stepped in after Lord and Miller departed due to “creative differences.” Lord and Miller’s vision was supposedly too comedic and departed too much from the script, while Howard returned to a more standard Star Wars tone.

The result was a chaotic production process where the main roles were in flux, including recasting the villain from an alien played by Michael K. Williams, to a human played by Paul Bettany. One of the other changes was Val’s death. “It was much more just to do with the time we had to do the scenes,” Newton said, explaining that it was “easier” to just kill Val off during re-shoots. This paints an unflattering picture of the filmmakers’ priorities, with Val’s role being dismissed in favor of getting the movie finished on time.