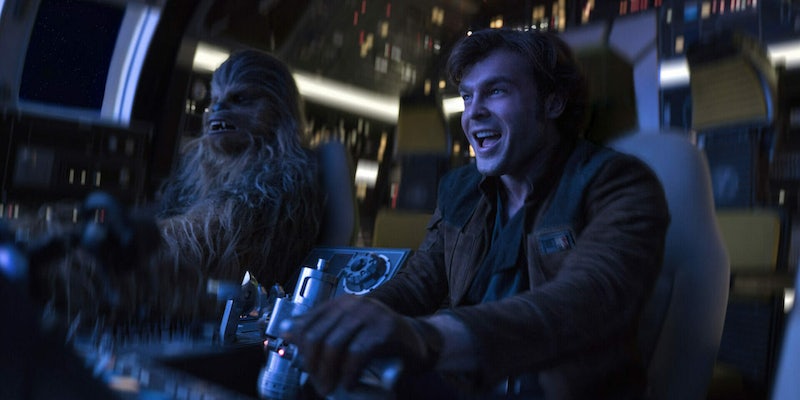 The first big character death in ‘Solo’ was a mistake

This was totally mishandled.

This post includes spoilers for Solo: A Star Wars Story.

“I wish this character didn’t die” is not the most sophisticated of critiques. But in the case of Solo: A Star Wars Story, it’s relevant.

As a standalone movie like Rogue One, Solo had extra leeway to kill off main characters. Rogue One made those deaths feel meaningful, but in Solo, at least one example was frustratingly meaningless. I’m talking about Val (Thandie Newton), the wife of Han’s criminal mentor Tobias Beckett (Woody Harrelson). Introduced as a core member of Beckett’s heist crew, she gets killed off after one act. Since she’s the first Black woman with a significant role in Star Wars, this already feels like a dubious decision.

Val’s death doesn’t quite fall into the fridged girlfriend trope, where girlfriends and wives are killed to provide motivation for the male lead character, so at least there’s that. However, her actual death scene doesn’t fully make sense. In their handful of scenes together, Val and Beckett come across as a matched set of cynical thieves. When they plan to rob a train together, Beckett argues that Han and Chewie should join the team while Val is more wary of outsiders. During the heist, Val’s job is to set a bomb and derail the train while the others grab the loot. But at the last moment, Val is attacked by Imperial droids, and chooses to blow herself up instead of escaping. She doesn’t sacrifice herself to save her husband’s life—she dies so he can finish the job. What?

The scene suggests that Val sees no way to escape, but here’s the thing: Star Wars is full of daring rescues. Solo’s writers engineered a scenario where Val died without an appropriate emotional payoff. She essentially kills herself so Beckett can secure his retirement fund.

Before that, we don’t see enough of their marriage to get really invested. And once Val’s dead, Beckett’s grief plays a surprisingly minimal role. He’s angry at Han for a scene or two but then refocuses his attention on the next job. (This jibes with his characterization as a ruthless criminal, but are we meant to think his relationship with Val was more one-sided than it seems? It’s totally unclear.)

This all plays into some admittedly complex dynamics regarding race and gender in blockbuster storytelling. There’s nothing inherently wrong with killing off a woman or a person of color on-screen, but it plays into troublingly common trends.

There are dozens of action movies where tough men lose their wives in the first act. There are almost none about Black women being gun-toting space adventurers. Solo screenwriters Lawrence and Jonathan Kasdan chose to give Beckett an integral role, whereas Val was more of an afterthought. She’s cool, but she doesn’t get a story of her own.

Solo might have been a better movie with Val in the mentor role instead. Beckett is basically a stock character from the Woody Harrelson archives, and it would be a refreshingly bold move to kill him off early on. As it stands, the plot is driven by Han, Beckett, Dryden Vos, and Qi’ra: three white guys and a white woman in a classic femme fatale role. Lando, Chewie, and L3-37 make up the supporting cast, while Val got more airtime on the promotional tour than she did in the film itself. If you watch Westworld, you’ll know that’s an underutilization of Thandie Newton’s talents.

In the grand scheme of dubious Hollywood decisions, this isn’t a big deal. The Star Wars franchise is still making progress with its increasingly diverse cast, and Thandie Newton had a great time making this movie. But Val’s life and death suffered from lazy writing, and with a little consideration, she could have been so much more interesting.