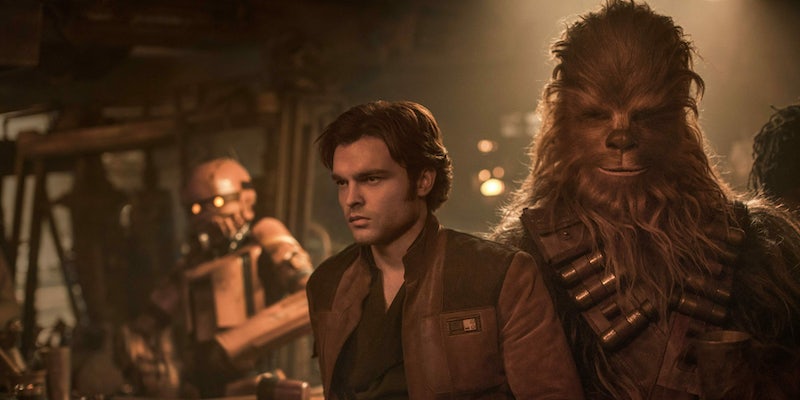 ‘Solo: A Star Wars Story’ doesn’t feel like a story worth telling

The film features a strong lead but has no new ideas.

This review includes no major spoilers for Solo: A Star Wars Story.

My initial concern for Solo wasn’t about its directorial switcheroo or the difficulty of measuring up to Harrison Ford. It was the question of whether this film needs to exist at all. Of all the iconic Star Wars characters, Han is the least viable for a prequel. His evolution begins when he meets Luke Skywalker, making him unavoidably static in his younger years. Could Solo, like Rogue One, become something deeper than an appeal to nostalgia? As it turns out, the answer’s no.

Despite a strong performance from Alden Ehrenreich, Solo feels unnecessary—and I say this as someone who secretly believes there’s no such thing as a bad Star Wars movie. When I rewatch the prequels, with all their terrible dialogue and dubious CGI, I still sense a kernel of genius within. The sweeping mysticism of the Jedi; the creeping tendrils of the Empire’s backstory. With Solo, I see a competently made blockbuster with nothing at its core. The creative infrastructure of Disney and Lucasfilm means we’re still treated to gorgeous costumes, cool aliens, and crowd-pleasing callbacks to earlier canon. Unlike Rogue One—which had its own behind-the-scenes issues—Solo doesn’t light that spark of imagination.

Set a few years before A New Hope, Han is in his early twenties. Ehrenreich plays him as boyishly naive yet familiar as the overconfident scoundrel we know and love. Without appearing to do a detailed impression of Harrison Ford, he sets up a clear lineage from here to Han’s final appearance in The Force Awakens. There are moments where, through body language and possibly some clever camera angles, Ford might as well be on-screen. Considering the fact that Ehrenreich looks like a five-foot-nine Disney Channel star in real life, that’s pretty impressive.

Veteran Star Wars writer Lawrence Kasdan co-wrote the screenplay with his son Jonathan, envisioning a classic heist story. Kicking off his lifelong quest for that One Last Job, Han joins forces with cynical thief Tobias Beckett (Woody Harrelson) and his team to steal some expensive fuel for crime boss Dryden Vos (Paul Bettany). It’s the kind of seat-of-your-pants adventure that Kasdan delivered for The Empire Strikes Back and Raiders of the Lost Ark; a cascading sequence of disasters and last-minute escapes. Unfortunately, it’s just not very interesting.

Judging Solo as an action/heist movie, it doesn’t have the energy of the Fast & Furious franchise. Judging it as a Star Wars movie, we return to our original problem. Han doesn’t need his own prequel, and Solo offers little new insight into the Star Wars universe. This extends to the supporting cast because Beckett and Dryden Vos are basically stock characters. Harrelson has half a dozen of these roles in his back pocket already, and much as I enjoy watching Bettany menacingly snack on alien hors d’eouvres, I wish we could’ve seen the original plan for Dryden Vos: a humanoid mountain lion played by Michael K. Williams. That was before Ron Howard replaced Phil Lord and Chris Miller as director, and reshot 70 percent of the movie.

Han’s main motivation is his childhood sweetheart Qi’ra (Emilia Clarke), a street rat turned glamorous gangster. With Beckett’s help, Han wants to steal their way out of a life of crime. It’s an idea so old-school that it’s arguably a sexist cliché, but oddly enough, it works. Conceptually, anyway. It’s clear that Han idealizes Qi’ra without fully understanding who she is. The film drops clangingly obvious hints that Qi’ra has lived a harder life than him, showing a more sophisticated understanding of the criminal underworld. She plays the long game, while Han lives minute-by-minute without making realistic plans. It’s a potentially interesting precursor to his romance with Leia, let down by Clarke’s corny acting. For someone who’s meant to be hiding mysterious undercurrents of moral ambiguity, Qi’ra is all surface. Clarke’s performance is as multilayered as skim milk.

Why not a Lando movie?

Solo will play well to the nostalgia crowd since Chewbacca (Joonas Suotamo) and Lando (Donald Glover) get the best roles of the supporting cast. Of all the stories Solo could explore with Han’s earlier life, his friendship with Chewie is the most promising. Inseparable but somewhat inexplicable, they’re one of cinema’s great partnerships. Chewbacca was inspired by George Lucas’ dog, but while Chewie does display a certain puppy-like loyalty, Han is clearly the pet in this relationship. At 190 years old, Chewie has already lived through the Clone Wars and the enslavement of his people. He’s seen some shit and perhaps views Han as a vulnerable stand-in for his missing family.

It’s no surprise that Lando is a standout star. Billy Dee Williams only had about 15 minutes of screentime in the original trilogy, so Glover has more leeway to make the role his own. His Lando is endlessly charming, maybe even smarmy, but like Han, he’s still young. The capes and the confidence are there, but he hasn’t matured into the guy who can run a whole city and still find time to double-cross Darth Vader. Oh, and you’ll understand what Glover and Jonathan Kasdan meant when they said Lando is pansexual. He’s definitely vibing with Han, although his deepest relationship is with his droid sidekick L3-37 (Phoebe Waller-Bridge).

L3 is our main connection to the political themes of Star Wars; a lone revolutionary among smugglers and thieves. She’s a strident believer in droid rights, and I went in expecting to love her. But while Waller-Bridge’s performance is delightfully offbeat, L3’s dialogue is frustratingly one-note. Almost every line is an angry comment about droid rights, often played for laughs. A weirdly unsubtle way of introducing an otherwise compelling idea, especially when you compare it to the more nuanced writing we saw for K-2SO. This whole franchise is about people figuring out how to survive—both literally and morally—under an oppressive regime. By that metric, L3 felt like a wasted opportunity.

Solo is an entertaining action flick, and you’d never guess it went through extensive reshoots before Disney deemed it ready for launch. However, it’s easily the least thought-provoking of the Star Wars movies. This isn’t a story that demanded to be told. Aside from Han’s iconic status, it’s hard to see why Solo got the greenlight before Leia, Obi-Wan, or Lando—a trio of obvious choices with more material to work with. Throughout Han’s predictable backstory, I kept wondering why they were trying so hard to make fetch happen. On two separate occasions, women implausibly inform Han of how brilliant he is. “You’re the good guy,” Qi’ra tells him, gazing up with liquid eyes as Han spectacularly flubs another crime. “We need warriors and leaders like you,” says a rebel leader, despite the fact that Han is neither. Solo is better when it acknowledges that Han is a mess, and we didn’t need a whole new spinoff to tell us that.