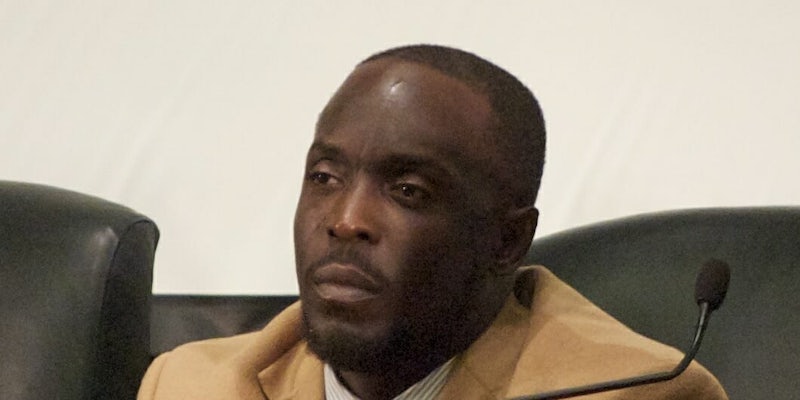 The reshoots meant his character was cut and replaced with Paul Bettany.

The extensive reshoots on Solo: A Star Wars Story meant an entire character had to be replaced. When Ron Howard took over from the original directors, Phil Lord and Chris Miller, he reputedly reshot most of the movie. That included scenes with Michael K. Williams, playing an alien named Dryden Vos, but Williams had a scheduling conflict. He had to abandon the role, and Paul Bettany stepped in to film a new version of the character.

In an interview with Sirius XM’s Jim and Sam Show, Williams shared some details about the role. Filmed using motion capture, Dryden Vos was “half mountain lion, half human.” Thanks to the time crunch, Paul Bettany’s version will be a plain old non-CGI human.

Had to say goodbye to my friend @Paul_Bettany today. Another terrific performance from a world class talent. pic.twitter.com/6jkNKQNQZZ

“He was extremely sophisticated. Very rich. He’d been around the world, older guy, and it was sort of a love triangle between Emilia Clarke’s character, Qi’Ra and the young Han Solo,” said Williams. “Not where it was overtly a love triangle but there was definitely a pissing contest going on for the girl’s attention.”

Vos flirted with Qi’ra as an experienced older man, while Han (naturally) argued that Qi’ra would prefer someone closer to her own age. It remains to be seen whether this dynamic will carry over to the final film. There’s quite a contrast between young Han Solo and an aging alien lion, but less so between Alden Ehrenreich (28) and Paul Bettany (a well-preserved human 46), who is still in the wheelhouse of love-interests for a 31-year-old actress.

Discussing the extremity of the reshoots, Williams described the situation as “crazy shit… one for the textbooks.”