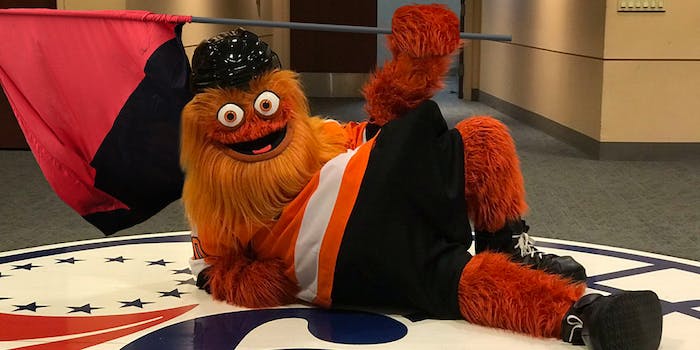 Gritty was honored for his civic contributions 'both on and off the ice.'

Gritty, that wild-eyed troll doll that forced his way into Philadelphian’s hearts in late September, has been formally welcomed into the city through a resolution. The Philadelphia City Council issued the formal resolution on Thursday, marking the first time the city has ever so-honored a sports mascot.

We’ve all become familiar with Gritty in some sense, whether through watching him bumble his way through his NHL debut with the Flyers or from Philadelphians’ use of him to protest a visit from the president. Regardless of how you first heard of Gritty, this frizzy-haired monster has found his way on to your social media feed, and potentially, into your heart.

The last is certainly true for the citizens of Gritty’s city. Philadelphians, initially aghast and aggravated by the 7-foot-tall muppet of a mascot, changed their tune in no time and full heartedly embraced Gritty. There may have been a few lagging behind, but with the city’s resolution, that’s likely to change.

It isn’t until the resolution begins breaking down Gritty’s, erm, qualifications, that this piece of the official documentation begins to truly shine.

“Gritty has been described as a 7-foot tall orange hellion, a fuzzy eldritch horror, a ghastly empty-eyed Muppet with a Delco beard, a cross of Snuffleupagus and Oscar the Grouch, a deranged orange lunatic, an acid trip of a mascot, a shaggy orange Wookiee-esque grotesquerie, a non-binary leftist icon, an orange menace, a raging id, and an antihero. He has been characterized as huggable but also potentially insurrectionary, ridiculous, horrifying, unsettling, and absurd,” the resolution reads. It goes on to name-drop John Oliver for his scathing roast of the “hostile, consistently unsettling, temperamentally unpleasant” mascot.

If you missed it, yes they did call Gritty a “non-binary leftist icon,” a claim that was touted by LGBTQ groups and even Antifa not long after the unveiling. Apparently, Philly is on board, as the resolution succinctly states “Gritty has been widely declared antifa.” This isn’t the first time someone made a similar claim, either. As far back as Sept. 26—two days after his unveiling—people began considering Gritty a symbol of Antifa.

Antifa or “antifascist” is a group of radical, Nazi-punching protesters that lean as far left as you can go. Their ideology, grounded in the idea that more ardent opposition to the Nazi party in the 1920s and 30s could have stopped the holocaust, relies heavily on aggressive, even violent, protest. (That does sound like Gritty.)

Perhaps the best part of the resolution, which is solid gold throughout, is its admittance that “Gritty’s National Hockey League debut, featuring a bottoms-up fall onto the ice, is a metaphor for the vulnerability that each of us face as we, too, skate onto the slippery ice that is life.”

The remainder of the text, which absolutely deserves to be read in its entirety, describes Gritty’s inexorable crawl into the hearts of confused, but passionate, Philadelphians around the state. “Gritty may be a hideous monster, but he is our hideous monster; now, therefore, be it,” the resolution proclaims, before concluding formally.

Ah, Gritty, you bulbous mass of orange hair and crazy eyes, how you have changed the world of sports.