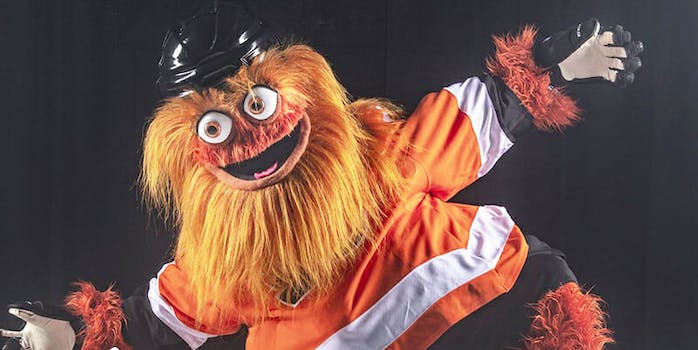 On September 24, 2018, the Philadelphia Flyers unveiled its new team mascot: a hairy orange seven-foot-tall crazy-eyed monster named “Gritty.” According to the Flyers website, Gritty is a “bully,” a trait he apparently inherited from his father. He is also described as “feisty,” “a fierce competitor,” and “known for his agility given his size.”

“Legend has it he earned the name ‘Gritty’ for possessing an attitude so similar to the team he follows,” reads the bio, adding that his likes include eating snow straight from the Zamboni machine and hot dogs.

Philadelphians reacted almost immediately with a mix of revulsion and ridicule. Philly sports fans are known for being, uh, passionate when it comes to their teams, and the knee-jerk reaction was to completely reject the bizarre, inadvertently terrifying-looking mascot.

It also didn’t help that—when making his big NHL debut at the Wells Fargo Center—Gritty was kind of a shit show, falling down on the ice (so much for that agility?) and shooting some poor dude in the back with a T-shirt cannon.

But then, as the national media began chiming in with jokes, Philadelphia’s “no one likes us, we don’t care” mantra kicked into overdrive, which was probably best summed up by the following viral tweet.

Philly: What the f*ck is this?

National Media: What the f*ck is this?

Philly: YOU LEAVE GRITTY ALONE HE IS A NATIONAL TREASURE

It also certainly didn’t hurt Gritty’s standing with the City of Brotherly Love when he lobbed a low-key death threat at a rival team’s mascot. Nothing—and I repeat, nothing—endears yourself to Philadelphians like threatening to kill a guy for trashing on your city.

And Urban Saloon, a bar located in the Fairmount neighborhood of the city, came up with an appropriately questionable, stomach-turning sandwich concoction to honor Gritty featuring a Cheetos-crusted chicken breast topped with cheddar cheese, cheddar ranch dressing and Flamin’ Hot Cheetos.

As Gritty went overnight from joke to local hero, to the shock of no one, Philadelphians soon began showing their love for the Flyers mascot by immortalizing him permanently on their bodies.

“At first, I was disgusted. I was like, what the hell is this? Why did you do this? Why is this a thing?” explained local bar operator Jim Lardani, on his decision to get a Gritty tattoo less than a week after the mascot materialized.

“It was like an hour after that I fell in love with him. I realized he’s Kensington as hell. Like, I’ve seen this guy at the Wawa on Columbus Boulevard.”

The rest of the country, perhaps fueled by morbid curiosity, likewise became absolutely fascinated by Gritty.

All of a sudden, the bright-orange mascot was everywhere—on The Tonight Show dancing to Boyz II Men with Jimmy Fallon and Ricky Gervais, the butt of a “Weekend Update” joke on Saturday Night Live, given an absolutely savage dressing down by John Oliver on Last Week Tonight, and getting jokingly “unmasked” on Conan.

And then, something else happened. Somehow, Gritty transcended the national mockery and became embraced as sort of a reluctant anti-folk hero. Everyone loves an underdog, and in a way, we are all Gritty. Gritty is us.

Online, Gritty became a fast viral sensation. A Gritty subreddit popped up where people could share their memes and jokes. Parody accounts began surfacing on Twitter–the most notable of which, @FellowGritty, paints Gritty as an anti-capitalist, anti-fascist mascot.

Embrace your fellow worker! #1u pic.twitter.com/24KKYTnhGy

when u try and “unmask #antifa” pic.twitter.com/6qmkEOazLx

Gritty’s notoriety as a mascot of the people initially gained traction when the socialist magazine Jacobin tweeted “Gritty is a worker” just two days after his launch. The association was not a stretch for a city with blue-collar roots that wears an ever-present chip on its shoulder.*

(*Although apparently not to the Wall Street Journal, which published an op-ed trying to reclaim Gritty from the antifa movement—which, good luck with that!)

Gritty’s rising liberal political star continued to skyrocket, when—just one week later—Philadelphia was visited by another big orange abomination, President Donald Trump. Naturally, the mascot became an overwhelming symbol of resistance by those marching in the streets to protest Trump’s presence.

Gritty is also being adopted as an unlikely LGBTQ symbol. Josh Fernandez, a social media specialist and lifelong Philadelphia area resident who admittedly has zero interest in local sports, compared Gritty to 2018’s answer to the Babadook. “Gritty checks all of the boxes under queer icon requirements–flamboyant with some gender ambiguity,” he told the Daily Dot.

“I have never watched a hockey game in my life, but I love Gritty with a depth I cannot truly describe,” added Lou Alexander, a queer social worker who lives and works in the city.

If nothing else, it all just goes to show that Gritty’s appeal surpasses all constructs. But most importantly, Gritty is Philly.

“He’s rough around the edges and the quintessential representation of Philly,” said K. Layne Crawford, a former Philadelphian living in Florida.

“He’s like an uncle who let you sneak sips of his Lionshead when your mother wasn’t looking during Christmas when you were a kid,” Crawford continued. “He taught you how to drive at 12 after he drank way too much at a Phils game. He bought you your first lap dance at Daydreams in Tacony. You bailed him out of jail after he threw a boat battery at a Cowboys fan. He’s not the greatest role model, but he’s always there for you.”

Colleen Moravec, who runs a Gritty Instagram fan account with over 1,000 followers (and counting!) told the Daily Dot that Gritty “came just when we needed him, because he was always here.”

In other words, he’s ours, and he’s here to stay. But I guess Philly can share him with the rest of the country.