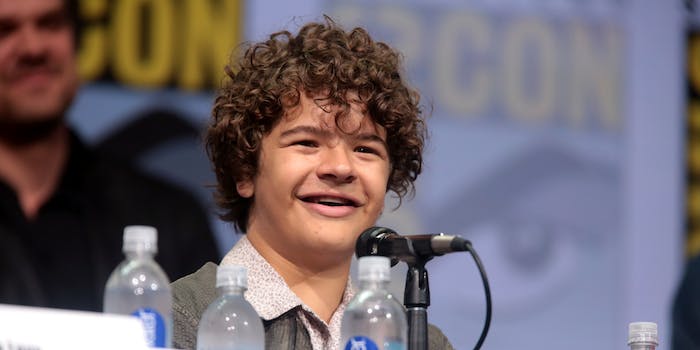 He took a low-profile job while 'Stranger Things' is hiatus.

Stranger Things catapulted its young stars to international fame, but one of them is definitely still a down-to-earth guy. Gaten Matarazzo (Dustin) has taken a summer job at a restaurant in New Jersey, working alongside some of his family.

Matarazzo was apparently spotted by fans running food at the restaurant, wearing (of course) a mask. Sometimes this kind of story feels like a publicity stunt, but given the fact that Matarazzo is working with his family and the restaurant wasn’t named, it sounds like he’s just keeping busy between seasons of Stranger Things. His reps did confirm to the Hollywood Reporter that it’s him, so this isn’t a case of mistaken identity.

Stranger Things began filming season 4 in February but was shut down in March due to COVID-19. Production hasn’t restarted yet, so the show is unlikely to return before 2021.

Several of the other Stranger Things stars have big projects in the works, or due to come out soon. David Harbour is in the Black Widow movie, Finn Wolfhard is in the new Ghostbusters reboot, Charlie Heaton is in the much-delayed New Mutants movie, and Millie Bobby Brown plays the title role in Netflix‘s upcoming Sherlock Holmes spinoff Enola Holmes. However Matarazzo does seem to have a gap in his schedule this year, which probably explains why he decided to chill at home and take a low-key restaurant job between seasons. He is, after all, only 17.