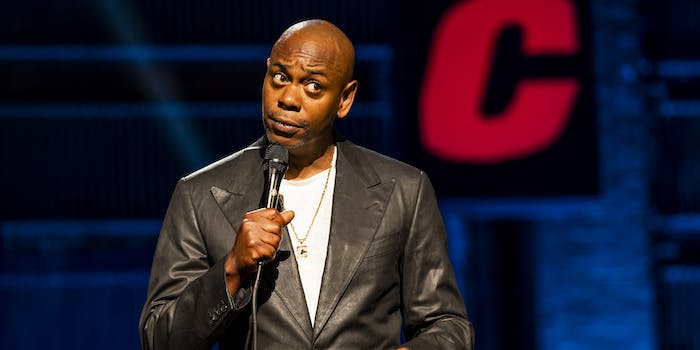 Not for the first time, Dave Chappelle is facing criticism for making transphobic jokes in a comedy special. Released this week on Netflix, his new special The Closer earned disappointing reviews, with critics describing it as “boring,” “charmless,” and above all, transphobic. The show focuses heavily on Chappelle’s relationship with his image as a controversial comedian, doubling down on intentionally offensive topics from his earlier specials, where he derided the #MeToo movement and LGBTQ+ people.

In The Closer, Chappelle aligns himself with J.K. Rowling, ridiculing the idea that she was “canceled” for espousing anti-trans views. “They canceled J.K. Rowling, my God,” he said. “Effectually she said gender was a fact, the trans community got mad as shit, they started calling her a TERF.” He also joked about trans women’s genitals and suggested that Americans care too much about homophobia and too little about racism, a recurring theme that ignores the existence of Black queer and trans people.

Chappelle has always thrived on controversy, but in recent years his public image has begun to sour. Rather than being edgy and boundary-pushing, his jokes about trans people and sexual assault (for instance when he targeted Michael Jackson’s accusers) are increasingly seen as regressive and unoriginal. Within days of its release on Netflix, The Closer attracted criticism from both GLAAD and the National Black Justice Coalition, which requested that the comedy special be pulled from Netflix.

“It is deeply disappointing that Netflix allowed Dave Chappelle’s lazy and hostile transphobia and homophobia to air on its platform,” said an NBJC representative, pointing out that Black trans people face high rates of transphobic violence. Meanwhile, GLAAD said that Chappelle “has become synonymous with ridiculing trans people and other marginalized communities.”

Alongside these formal call-outs, some people from within the Netflix community made their voices heard. Dear White People executive producer Jaclyn Moore, who is trans, announced that she would no longer work with Netflix as “they continue to put out and profit from blatantly and dangerously transphobic content.”

Describing Chappelle as a former “hero” of hers, Moore said that Chappelle’s transphobic humor had real-world consequences, highlighting the bigoted violence faced by herself and her trans friends.

A thread from a Netflix software engineer also went viral on Wednesday, critiquing Chappelle’s transphobic comments and striking back against the idea that trans people are harmlessly “offended” by his comedy. “Being trans is actually pretty funny if you’re someone who actually knows about the subject matter,” the engineer wrote. “How could volunteering for a second puberty *not* be funny? That isn’t what he is doing though. Our existence is ‘funny’ to him – and when we object to his harm, we’re ‘offended’.”

Given that Chappelle faced similar criticism for previous Netflix specials in 2017 and 2019, there’s no sign that Netflix objected to him discussing these themes again. Indeed, if Netflix had attempted to censor The Closer, Chappelle surely would’ve spoken out about it by now. However, this is his final planned special at the streaming service.

The question now is whether Netflix will respond to the demands for The Closer to be taken down. Chappelle’s Netflix deal reportedly paid him $20 million per special, meaning there’s probably a lot of legal red tape regarding how the specials are released. But while it’s unusual for Netflix to pull a comedy special, it’s not unheard of. An episode of Hasan Minhaj’s Patriot Act was removed in response to demands from the Saudi Arabian government, and Netflix canceled a comedy show by John Crist after he was accused of sexual misconduct.

We’ve reached out to Netflix for a statement regarding this backlash.