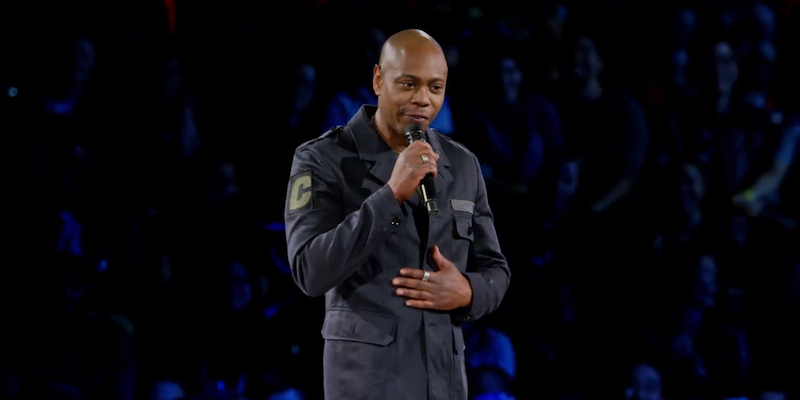 This isn't the first time he's made jokes at trans women's expense.

Earlier this week, transgender activists began boycotting Charlamagne Tha God’s radio show “The Breakfast Club” after comedian Lil Duvall joked that he would kill a trans woman if she outed herself after having sex with him. Now, comedian Dave Chappelle is under fire for telling an onslaught of transphobic jokes in his new set.

Chappelle began a 16-show residency at Radio City Music Hall in New York City on Monday. According to Vulture’s Jesse David Fox, who attended the show, Chappelle began his stand-up performance with a 20-minute set of trans jokes, which Fox called “rooted in disgust and generalization.”

One joke focused on Trump’s transgender military ban. Chappelle joked that transgender people must be a “secret weapon,” because ISIS would find trans people too disgusting to fight.

“If I was in ISIS in the trenches fighting against the United States and all of the sudden I see a man with a beard and big D-cups titties just rushing my foxhole and shit, I’d be horrified,” Chappelle said, according to Vulture.

“I read in the paper that Caitlyn Jenner was contemplating posing nude in an upcoming issue of Sports Illustrated,” he started. “And I knew it was politically incorrect to say, so I figured I’d just say it for everybody—yuck. Fuck, man, I just want to read some stats, like why are you cramming man-pussy in the middle of the sports page like that?”

While he admitted that he doesn’t quite understand trans people, in a moment of reflection, Chapelle did say that his personal ignorance doesn’t disqualify a trans person “from being a human being that deserves a life with dignity and happiness and respect.” But then he proceeded to end his trans segment by suggesting only white trans women transition genders.

“[T]he only reason all of us are talking about transgenders is because white men want to do it. If it was just blacks and Mexican like, ‘Hey, y’all, we feel like girls inside.’ They’d be like, ‘Shut up, n****r, no one asked how you felt,'” Chappelle said during the show.

Trans activists and allies have since turned to Twitter to criticize Chappelle, telling the comedian to think up some new jokes.

This is going to sound rhetorical, but I mean it sincerely:

I got love for Dave but I don't let admiration get in the way of morality. These joke were a bit far down the road and insensitive.

it's an ignorant and bigoted statement. Many trans folks are Black

Others defended Chappelle, saying that it’s a comedian’s job to write jokes about the world. For them, that includes writing sets about transgender people.

If only Chappelle ran all his material past Jezebel's staff in case it was offensive, he may've had a better career.https://t.co/fICsWCqEoa

Other material of Chapelle’s has also caused controversy in recent months. The stand-up comedian previously told America to give President Donald Trump “a chance,” though he has since apologized. He has also been criticized for consistently approaching LGBTQ issues in a tone deaf manner. Compared to Chappelle’s work criticizing racism in the Chappelle Show, many feel the comedian should redraft some of his more insensitive jokes.