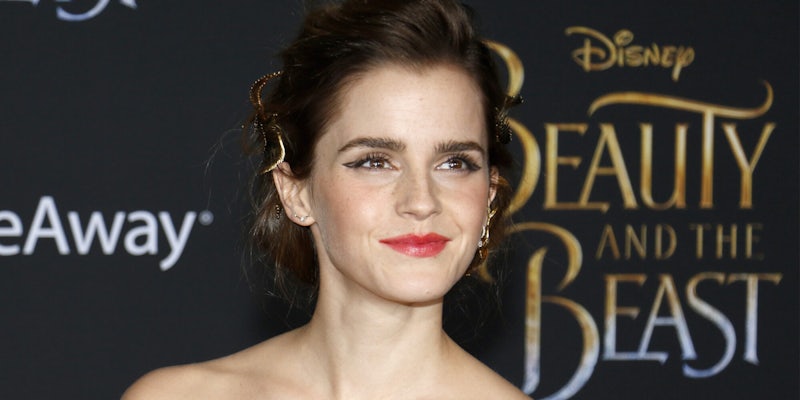 'Trans people...deserve to live their lives without being constantly questioned.'

J.K. Rowling doubled down on her recent transphobic remarks with a long blog post on Wednesday, elaborating on one of the key philosophies of trans-exclusionary feminism: the belief that trans people are some kind of threat to cisgender women.

Framing herself as a victim of online harassment, she ended by suggesting that people support trans rights out of “conformity” in order to “scoop up the woke cookies and bask in a virtue-signalling afterglow.”

Her words inspired a further flood of backlash from Harry Potter fans, following several fandom charities and organizations that had already publicly distanced themselves from the author. More Harry Potter franchise actors are speaking out against her comments, joining a pair of high-profile public statements from Daniel Radcliffe and Eddie Redmayne, both of whom pledged wholehearted support for trans rights. Emma Watson, who has an extensive history of feminist activism, was one of the first to speak out.

“Trans people are who they say they are and deserve to live their lives without being constantly questioned or told they aren’t who they say they are,” she tweeted. “I want my trans followers to know that I and so many other people around the world see you, respect you and love you for who you are.”

Watson also wished her followers a happy Pride month and recommended the charities Mama Cash and Mermaids. In recent days she has been using her platform to promote the words of Black activists related to the Black Lives Matter movement, while Rowling focused her attention on promoting her new book and spreading transphobic misinformation.

Since Watson and Radcliffe have both made their opinions known, some fans may be wondering about the third member of Harry Potter‘s famous trio. Rupert Grint hasn’t made any kind of statement, but he doesn’t use social media or have a history of commenting on political issues, so his silence isn’t surprising. However, a few other Potter actors have already spoken out, beginning with Katie Leung, who played Cho Chang. She posted a trick tweet that led into a thread promoting Black LGBTQ+ charities, making her position clear.

Bonnie Wright (Ginny Weasley) lent her support, and Evanna Lynch (Luna Lovegood) posted a longer statement where she described Rowling as a “generous and loving person,” while also disagreeing with Rowling’s comments, confirming her own support for trans identities, and decrying the toxic atmosphere on Twitter. Chris Rankin (Percy Weasley) also tweeted links to trans charities. None of Eddie Redmayne’s Fantastic Beasts co-stars (Katherine Waterston, Dan Fogler, Alison Sudol, and Ezra Miller) have commented publicly as of yet.

Rowling is the leading creative force behind the Fantastic Beasts franchise, with a new movie slated for release in 2021. It’s her franchise, but her opinions are rapidly alienating fans and creating a conflict with the actors of her own movies.

Warner Bros. is now stuck between a rock and a hard place. Harry Potter is one of the studio’s tentpole franchises, including theme parks and an astronomical volume of merchandise. At the same time, an increasing number of Potter fans now actively dislike Rowling and may boycott future movies, alongside book review sites and other fantasy authors publicly distancing themselves from her work.

Shortly after Rowling’s blog post on Wednesday, Warner Bros. released a rather equivocal quote to Variety.

“The events in the last several weeks have firmed our resolve as a company to confront difficult societal issues,” it reads. “Warner Bros.’ position on inclusiveness is well established, and fostering a diverse and inclusive culture has never been more important to our company.”

The statement continues with some more vague comments about inclusivity and “valuing” the “storytellers” behind Warner Bros.’ products. There’s no specific mention of Harry Potter, J.K. Rowling, or trans issues, which isn’t a huge surprise because the statement’s main purpose is to acknowledge the controversy without ruffling any feathers.

The studio will almost certainly be forced to clarify its stance in the future, as Rowling’s opinions become more widely known, and we draw closer to the next Fantastic Beasts release date.