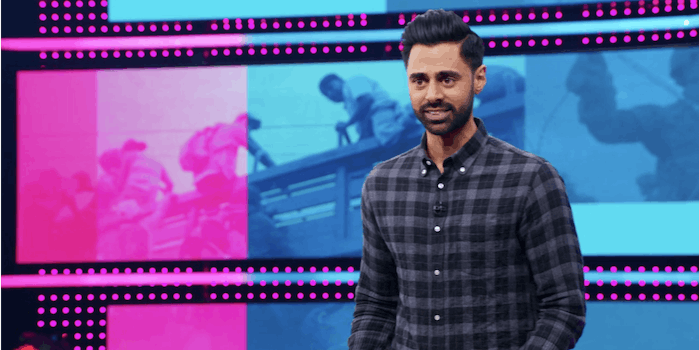 Netflix removed an episode of Patriot Act with Hasan Minhaj in Saudi Arabia following complaints from the kingdom that the episode violated its anti-cybercrime law.

The episode aired in the wake of Washington Post contributor Jamal Khashoggi‘s murder. In it, Minhaj criticizes the Saudi Arabian government and Saudi Crown Prince Mohammed bin Salman, whom Minhaj refers to as “MBS.” The nearly 30-minute episode sees Minhaj railing against everything from the war in Yemen to Saudi funding in Silicon Valley.

Saudi authorities "made a request to take it down because it allegedly violated the kingdom's anti-cyber crime law." By @ahmed https://t.co/yEu0LMGYt0

Netflix confirmed the episode’s removal last week following a request from Saudi Arabia’s Communications and Information Technology Commission, according to the Financial Times. The Saudi telecoms regulator reported cited an article of the law that states that “production, preparation, transmission, or storage of material impinging on public order, religious values, public morals, and privacy, through the information network or computers.” it’s a serious offense, with violators punishable with “up to five years in prison and a fine not exceeding SR3m ($800,000),” Financial Times reports.

Netflix defended its decision, telling the Financial Times in a statement, “We strongly support artistic freedom worldwide and only removed this episode in Saudi Arabia after we had received a valid legal request — and to comply with local law.”

In the episode, Minhaj doesn’t pull his punches. He called the war in Yemen “one of the worst humanitarian crises in the Middle East,” which he compares to being the “biggest subway masturbater in New York. Its a title no one wants, but the competition is fierce.”

Later in the episode, Minhaj added: “Even executions are up. The country is on track to execute more than 2,000 people by the year 2030. Now that’s the vision 2030 nobody’s talking about. Strongarming, coercion, detaining people. These are MBS’s go-to moves, and he’s been getting away with all of it.”

Netflix users outside of Saudi Arabia can still view all aired episodes of Patriot Act. Still, people on Twitter were alarmed about the removal of the episode, which uses comedy to communicate real-world issues, and issues the move raises about government censorship.

Holy Shit @netflix ….what?!!? Why would they do that? That was a brilliant episode. Why do they care what Saudis rules are?

The episode of Patriot Act in which @hasanminhaj takes aim at Saudi Arabia, its war in Yemen and the murder of #JamalKhashoggi was excellent. That @netflix buckled to Saudi pressure and removed it in the kingdom is cowardly self-censorship. Disgraceful! https://t.co/Ln3vFuyslx

“The episode of Patriot Act in which @hasanminhaj takes aim at Saudi Arabia, its war in Yemen and the murder of #JamalKhashoggi was excellent. That @Netflix bucked to Saudi pressure and removed it in the kingdom is cowardly self-censorship. Disgraceful,” Twitter user @DiabolicalIdea wrote. Though many people echoed that sentiment, other users pointed out that Netflix must adhere to the laws of the countries it streams in.

@netflix selections are different in every country – based off of local laws and copyrights.

Looks like they pulled it _IN SAUDI ARABIA_, in order to comply with Saudi Arabian criminal law. While its nice for companies to sometimes stand of for free speech in other countries, I have a hard time getting to upset with a company that doesn't want to violate criminal law.