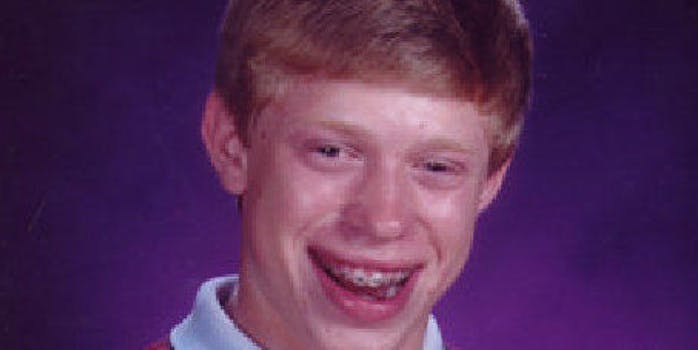 Did Bad Luck Brian ever catch a break in life?

The image macro meme came to be a trademark internet-humor bit in the late 2000s as mainstream folks started finding their feet online. Many early memes were simple concepts. All anyone had to do to play along was throw a brief caption—in Impact font, of course—above and below a picture. Among the famous examples was a guy who was a scumbag, a woman who was overly clingy, and a cat dissatisfied with life. And, of course, a guy who personified having foul luck.

Enter Bad Luck Brian, an image macro meme of a goofy teenager taking a class photo while making a braces-filled grin and wearing an ugly plaid sweater vest. There’s nothing about the photo that necessarily speaks to misfortune, except perhaps the well-known plight of awkward years of adolescence. Nevertheless, the internet decided it was the perfect medium on which to explore the theme of the cruel capriciousness of fate.

Bad Luck Brian, it should be noted, isn’t actually a Brian. The real name of the kid in the photo is Kyle Craven, who was 22 years old and about to graduate from Kent State University when the meme first blew up in early 2012. A picture taken for his 2005-2006 high school yearbook was loaded onto Reddit, and the rest was online history.

1) He owes internet infamy to his friend

The first Bad Luck Brian meme was posted to Reddit by Kyle’s longtime friend Ian Davies. The caption read “takes driving test / gets first DUI,” which definitely counts as misfortune, but if you’re able to qualify as intoxicated on a driving test, there’s a little more than just luck involved. Either way, this was quality enough content that other internet jokesters decided to run with it and create other versions.

Kyle recounted to the Washington Post that Ian called him at 4 am on Jan. 24, 2012. Understandably, Kyle didn’t wake up to answer the phone, so Ian left a voicemail, saying, “Dude, I just made you internet-famous.” And indeed he had.

2) The principal made him retake the photo

Kyle was something of a class clown in his high school days. He once did an intentionally awful cover of Hanson’s “MMMBop” at a talent show. He threw unwrapped packets of butter on the cafeteria ceiling so they’d fall on freshmen during the next lunch period. He was a regular Bart Simpson, that one. If you knew all that, it’s no surprise that he was up for some photo day hijinks.

So when the principal saw the photo that would eventually be the face of a meme, she demanded that Kyle return the next day to retake it. Indeed he did. That’s right, the Bad Luck Brian photo is not the one Kyle has in his yearbook.

3) Kyle no longer has the original Bad Luck Brian photo

When Kyle had to return to school to retake his yearbook photo, the principal demanded the original photo be turned in. That happened, but not before Ian and Kyle scanned it onto a computer the night before. So Bad Luck Brian exists only on the internet, at least unless you print out a copy of it. But the original glossy appears to be lost to the ages.

For a while, Hot Topic and Walmart sold shirts bearing his image. There was Bad Luck Brian stuffed animals and paperweights for sale, and he was part of ad campaigns for Volkswagen and RealPlayer. All in all, not a terrible profit for the purchase of a sweater vest at a thrift store.

Celebrities from all eras have known the lesson that a cheap and easy way to gin up excitement is simply to interact with other celebrities. That’s the case with internet microcelebrities, or even, in this case, the inspiration for early memes. In the summer of 2013, Bad Luck Brian and another image macro based meme, Overly Attached Girlfriend, staged a date skit on YouTube where they each played into their characters. She would occasionally say things that sounded clingy or borderline obsessive while he showed up with diarrhea and sharted at the dinner table. Everybody got a chance to play the hits. Nowadays this might seem like a relic of an internet period gone by, but it racked up more than 4 million views.

Given that Reddit was the genesis for the Bad Luck Brian meme, it only makes sense that the man behind the infamous photo would open himself up to the site’s Ask Me Anything feature. Yet one of the site’s moderators disagreed and deleted an AMA with Kyle that was posted on April 11, 2012—a few months after the meme took off. A moderator claimed in a long explanation that since Kyle was not part of a significant event, and that new memes were created nearly every day, he was not unique enough of a presence to be the subject of an AMA. Suffice it to say plenty of users disagreed.

8) Kyle did a second AMA in a different subreddit

In May 2012, a month after his initial attempt at an AMA, Kyle returned to do an AMA on the Advice Animals subreddit, sort of a clearinghouse for the type of image macro-based meme that typifies Bad Luck Brian.

In it, when asked if anyone recognizes him from the meme, Kyle claimed he ran into Seth Rogen in New Orleans. The actor knew who Kyle was and said he was a fan. He also said his unluckiest moment was being evacuated from a hotel in Hawaii when the tsunami hit Japan in 2011. All in all, not terribly unlucky for a guy who helped inspire a meme about bad luck.

9) The meme generator lives on

Still interested in cranking out Bad Luck Brian memes in the year of our Lord 2017? Perhaps there’s a facet of bad luck experience left unexplored in the five years the meme has existed. Maybe making one just feels like a throwback. Either way, there’s a Bad Luck Brian meme generator, making it all too convenient to put one together with the available template. Now you just have to wait for the internet trend cycle to loop back around and the masses to have an interest in seeing more.

The most popular one ever made with the generator? A Tetris one.

Even though Kyle has a full-time job away from the internet, he’s still willing to play the part of the Bad Luck Brian character on his Twitter, Instagram, and YouTube accounts. He’s been a little quiet over the last year on Twitter, but he’s always willing to poke some fun at himself.

As for Instagram, he recently showed off posing next to a meme-related board game that bears his likeness being sold at Target.

He also tried his hand at a Bad Luck Brian YouTube series. Things do not go well for him.