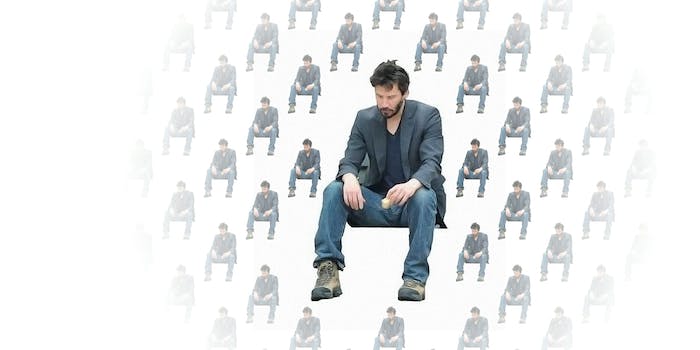 Photo via Know Your Meme Remix by Jason Reed

You know Sad Keanu, but do you know if Keanu was even sad?

Sometimes memes capture a basic truth of human experience. Other times they’re based on wholly unrepresentative images of public figures that are easy to riff on. Case in point: Sad Keanu. Back in 2010, a picture taken by a paparazzo of a seemingly downcast Keanu Reeves eating a sandwich on a park bench took social media by storm.

A bevy of jokey Photoshops circulated the internet, as did a rather artsy illustration. It may seem commonplace to riff on funny out-of-context celebrity photos these days, but back then it was an art form still in relative infancy.

Now that the John Wick franchise has rejuvenated his celebrity profile, it may seem bizarre that people at the time thought Keanu Reeves was down in the dumps. But he was in a bit of a career slump at the time, not producing a hit in several years. Journey, if you will, back to a time in which the world thought a friendly and chill celebrity was feeling low.

1. There was a Cheer Up Keanu Day

How many actually observed it in some way remains unknown, but more than 14,000 people joined a Facebook group committed to a day spent cheering up Keanu Reeves with “letters, emails, gifts, and any other niceties and kind words.” This despite the fact that the creator of the group was in on the joke. “I’m sure he’s doing fine,” then-21-year-old Daniel Murphy said at the time. “I don’t really think he’s that sad; I just think his work is underappreciated.” No word on whether Keanu Reeves was actually buoyed by the efforts of June 15, 2010, but it was not for a lack of trying.

There was a while there that Keanu Reeves wasn’t so wild about the whole Sad Keanu meme. In an interview with the BBC that aired several months later, in early 2011, Reeves said, “Do I wish I didn’t get my picture taken while eating a sandwich on the streets of New York? Yeah.” The overwhelming show of support from fans was apparently not something the actor’s representatives thought was a positive. They took pains to indicate that Reeves was not associated with Cheer Up Keanu Day. Said one statement issued shortly after the meme blew up, “Keanu Reeves would like to thank all of his fans for their concerns regarding his happiness and wants to assure everyone that all is well. This situation is a result of a misinterpretation of a paparazzi shot.”

3. There were all sorts of sad spin-offs

This took place nearly a decade ago, but it has anchored itself as a framework of memes, with several iterations similar to Sad Keanu. For instance, there was Sad Jack White based on, yes, a picture of Jack White looking vaguely upset while watching a Cubs game at Wrigley Field in 2014. Like Keanu, Jack was likely caught seemingly glowering when in fact he was just watching something. Or perhaps he has Resting Glower Face. Either way, a cardinal rule of the internet is that no celebrity is safe from having a facial expression taken out of context. There has been a Sad Joe Biden, a Sad Bill Murray, and a Sad Weird Al, three popular web figures known for being happy.

4. Reeves denied his book of dark thoughts was connected to the meme

Roughly a year after the Sad Keanu meme blew up, Reeves put out a book titled Ode to Happiness, an ironic choice given the morbid content within, such as grim blotchy drawings that accompany sentences like “I draw a hot sorrow bath” on one page, and “in my despair room” on the next. While that might seem like a project deliberately cashing in on the appeal of the popular meme, Reeves denied it.

“Oh, the internet deal,” he told the Guardian in 2011, clearly straining to affect a tone like he wasn’t keenly aware. “It was brought to my attention. Yeah, it was funny. But no, the book predates that by a long time. We finished it in August 2009. It is hopefully, in a quiet and enjoyable way, transformative. The kind of thing that takes you from this one place to another–to look at yourself and, y’know, it can always be worse. I hate that sentence: of course it can always be worse!”

Is it truly a landmark meme unless there’s merch you will deeply regret purchasing years later? I submit that it is not. Case in point: there is a tiny Sad Keanu available for purchase from the 3D printing service Shapeways. Yes, you read that right. That sucker is still available. So if you’re trying to bring that meme back, or figure it’s already hit the wave of nostalgia, that puppy can be yours, in miniature, full-color, sandstone glory.

In 2013, Reeves appeared on Stephen Colbert’s show on Comedy Central to promote the movie 47 Ronin. The host had Keanu recreate the original pose as well a few other interpretative downcast looks.

7. It made people realize Reeves is a pretty solid guy

The Sad Keanu meme likely wouldn’t have taken off quite so much if the public didn’t have the sense that Keanu Reeves is actually a decent person away from the spotlight. Sure, if he were a true heel, there would be schadenfreude-laden glee, but that likely wouldn’t resonate as well. In fact, along with the career achievements and charity donations people celebrated on Cheer Up Keanu Day, people online shared possibly true stories of the actor’s good deeds [sic’d below]:

A family friend builds movie sets, doesn’t design, is one of the poor dudes that just builds. Anyways he worked on the set for the Matrix and Keanu heard about family trouble he was having and gave him a $20,000 Christmas bonus to help him out. He also was one of the only people on the set that genuinely wanted to know peoples names, would say hello and mean it, and would talk to people as they were his peers and not below him just because they were practically making nothing to build a set. I’ve never heard anyone say Keanu is douche, seems like the nicest person in Hollywood from a second hand experience.

This being a story shared anonymously on Reddit, it has to be taken with a big ol’ grain of salt, but surely there must be some truth to at least some of those shared in the thread.