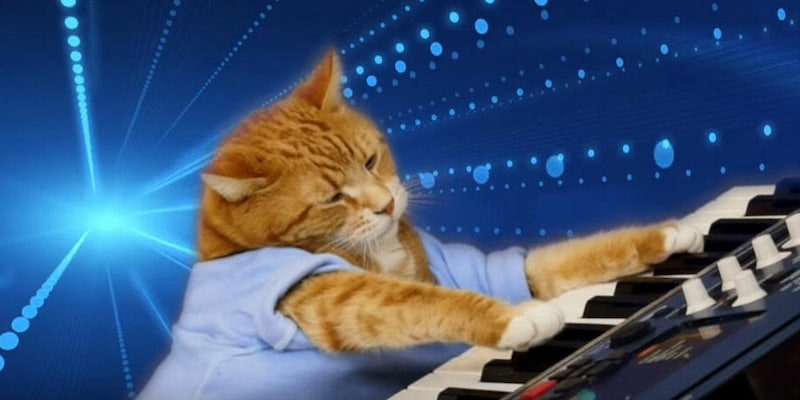 Play him off, Keyboard Cat.

Keyboard Cat has played off some of the internet’s most memorable fails. Now it’s time for his owner to play him off—again.

Bento, the second tabby to go by the YouTube-famous moniker Keyboard Cat, died on March 8, 2018, and his owner, Washington artist Charlie Schmidt, paid tribute to him with a truly incredible video montage.

In honor of his passing, we’ve gathered a few of the most interesting facts about the life and times of the original Keyboard Cat.

1. Her name’s Fatso. Get it straight.

You might know her only as Keyboard Cat, but the maestro on the keys was christened Fatso (for obvious reasons) by her owner, Charlie Schmidt.

2. The original video is (probably) older than you.

Schmidt originally recorded the original video of Fatso in the winter of 1984, when she was one year old. “I didn’t have any work, or money, or anything, but I did have a camera, a cat, and a keyboard,” Schmidt told the Daily Dot. “So I did what I do every day now, I take what I have and I try to make something that has an impact.” And in case you’re wondering, that’s an infant’s shirt she’s wearing.

Catso was one year old at the time of the original video shoot. You do the math. Unfortunately, Fatso played her last note in 1987.

4. Fatso’s owner had his own 15 minutes of fame

Not long after filming the original Keyboard Cat video, Schmidt gained international attention for his “nasal contortionism,” which is exactly what it sounds like—the ability to move his nose otherwise unimaginable ways. Schmidt traveled to Japan, Sweden, Germany, and England for commercials and appearances in front of audiences.  According to Schmidt, beer, and desperation to find a new medium were important factors in discovering his family had many different talents.

5. It took decades for Fatso to go viral.

In 2007, with Schmidt’s permission, My Damn Channel’s Brad O’Farrell mashed up Fatso’s original footage with a video of man in a wheelchair falling backward down an escalator. O’Farrell added the now synonymous phrase, “Play him off, Keyboard Cat,” and the rest is history. The video went viral, inspiring hundreds of fail videos from the Miss USA pageant and  Jerry Springer to Walker, Texas Ranger.

Farrell’s original fail video is a little difficult to find, but there are copies floating around YouTube.

After O’Farrell’s video went viral, Schmidt promptly rescued another plump, orange cat from the Spokane County Regional Animal Protection Services, and Schmidt later contributed to Shelter Pet Project’s “Start a Story. Adopt” campaign. Bento is Japanese for “lunchbox,” and O’Farrell said at the time that he loved the studio.

Keyboard Cat now has it’s own official Spotify profile, featuring singles like “A-OK” and a Keyboard Cat’s Greatest Hits album. Nothing like putting a Spotify playlist on shuffle and coming across “Fatso’s Theme AKA Play Him Off Keyboard Cat.”

Bento appeared in a Wonderful Pistachios commercial, donning a new color green and cracking one of the brand’s nuts during the song. The commercial has more than 3 million views, and the pistachio company sent him on a national “Get Crackin’ ‘Cross America” tour for an ad campaign.

9. Ron Livingston’s only YouTube video is a Keyboard Cat parody.

In 2010, Livingston, best known for his early role as Peter Gibbons in Office Space and Jack Berger in Sex and the City, uploaded a Keyboard Cat tribute. It’s racked up 4.6 million views, and it’s perfect in every way.

Here’s a side-by-side video that proves Livingston’s dedication to the craft.

Bento tried to run for president in 2012 but didn’t make it to the preliminary rounds, presumably because he’s a cat. He tried again in 2016 but apparently didn’t make it past the White House lawn.

11. Kids don’t know what to make of Keyboard Cat.

The Fine Bros. did a Kids React episode on Keyboard Cat, and the kids were split on whether it was a puppet or a real cat playing the keyboard.

12. Schmidt still doesn’t know what to make of his viral fame.

“All these years later, it turns out the internet liked it,” Schmidt said. “You can’t do this on purpose.”