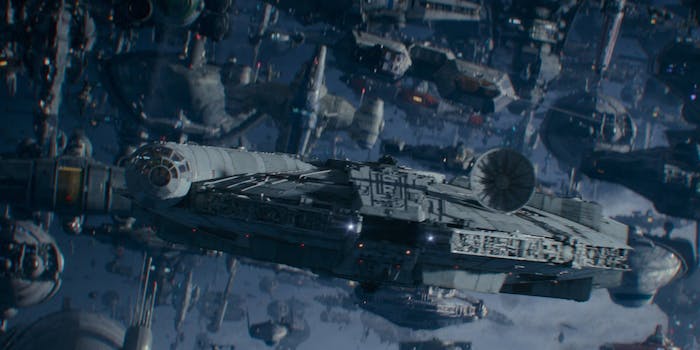 Pay attention to the final battle.

This post contains spoilers for The Rise of Skywalker.

The decisive battle at the center of The Rise of Skywalker’s finale didn’t come without a cost, and although the film was criticized for the lack of stakes for many of its major characters, we know of at least one more casualty in the final confrontation between the Resistance and the First Order.

Nien Nunb, the Sullustan smuggler and pilot who flew the Millennium Falcon with Lando Calrissian in Return of the Jedi and was part of the Resistance throughout the sequel trilogy, didn’t survive the Battle of Exegol. During the final battle, Nien Nunb is flying the Tantive IV, the same ship that Leia Organa is on at the end of Rogue One and the beginning of A New Hope, alongside a pilot named Urcos Furdam. But the Tantive IV is among the many, many ships that found itself at the mercy of Emperor Palpatine’s force lightning, which Palpatine used to bring down every ship that chose to defy his fleet.

While some of the Resistance, such as Poe Dameron, was able to reverse course after Rey interrupted Palpatine’s lightning attack, the Tantive IV (and the fighters inside of it) didn’t make it.

Some astute Star Wars fans might have already noticed the fact that Nien Nunb didn’t make it to the end of the film weeks ago. It’s on Wookieepedia, the Star Wars wiki that’s so comprehensive about detailing every single detail in the galaxy far, far away that there are canon and legends pages for ducks.

YouTuber EckhartsLadder featured it in a video about what you might’ve missed in the Battle of Exegol (around the 3:14 mark). Polygon even highlighted it soon after The Rise of Skywalker’s release in an article about Wedge Antilles’ brief cameo.

But for many Star Wars fans, the fact that one of the legacy characters from the original Star Wars trilogy (even a minor character such as Nien Nunb) died with little fanfare completely went over their heads

It went relatively unnoticed until writer Bryan Young posted about it on Twitter. Rae Carson, who is writing The Rise of Skywalker novelization, confirmed that observation, noting that “I think it’s pretty clear from the movie (upon careful watching).”

Although the Onion joked about fans being disappointed by the treatment of Nien Nunb in The Last Jedi, there will likely be some fans who might be upset or disappointed about the character not having a definitive death; Mike Quinn, the actor who portrayed Nien Nunb, was under the impression that the character survived. But even after news of the character’s death became more widespread, the fan response has been much more muted than it was after the death of a similar character in The Last Jedi: Admiral Gial Ackbar.

Ackbar, who was initially introduced in Return of the Jedi but whose life has been expanded upon in The Clone Wars and tie-in materials, was among the Resistance leadership on the bridge of the Raddus when the First Order blew it wide open in The Last Jedi.

Although Admiral Ackbar had a leadership position in the Rebellion and Resistance and Nien Nunb was a pilot, they each had a similar function in the original trilogy and much of the sequel trilogy. They each had a distinct look and showcased that the Rebellion and Resistance weren’t just made of humans. They each had roles to play, but in the grander scheme of the Skywalker Saga, they were relatively minor. Each character’s return for the sequel trilogy showcased that Leia, C-3PO, and R2-D2 weren’t the only members of the old guard who took up arms against the First Order.

And when both characters died, it gave us the sadness of losing a legacy character without risking the lives of Luke, Han, and Leia until the story called for it—something that would ultimately bite The Rise of Skywalker when it became too afraid of killing off major legacy characters.

But despite their similarities and function in the story, Admiral Ackbar’s death is controversial while Nien Nunb’s death isn’t—and a large part of that is because of what happened afterward. While just about every controversial element of The Rise of Skywalker doesn’t involve Nien Nunb, the loss of Ackbar led to the introduction of Amilyn Holdo, who served as a foil for Poe Dameron throughout The Last Jedi and remains one of the film’s more controversial characters.

We might learn more about how he went out or his role in the Resistance in The Rise of Skywalker novelization or future tie-in materials, but no matter how you felt about the death itself, Nien Nunb went out a hero. Not every character in the Star Wars universe gets to say that.