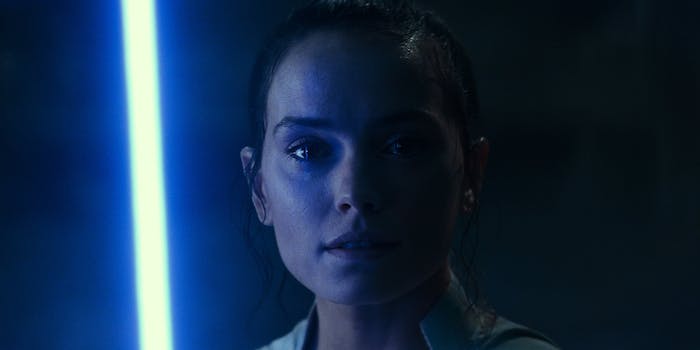 ‘Star Wars: The Rise of Skywalker’ is a film crafted by fan theory committee

They're theories enacted for the sake of theory seekers.

Star Wars: The Rise of Skywalker is, objectively speaking, a lot of movie. In the first 20 minutes or so of the film, Kylo Ren travels to Musafar and Exegol in search of the First Order’s origins; Finn and Poe meet a source at the Sinta Glacier and perform a series of lightspeed skips that take them to the Typhonic Nebula, Ivexia, and Cardovyte to get the First Order off their trail; Rey trains at the Resistance base at Ajan Kloss before a vision of herself on Emperor Palpatine’s throne unsettles her; and she, Finn, and Poe start their search for a Sith Wayfinder on Pasaana once news of Palpatine’s initial plans are revealed. And that’s before we get into the many MacGuffins and reveals that are casually dropped along the way.

The Rise of Skywalker offered resolutions for many of the questions lingering over the head of the sequel trilogy. Some of those choices, while controversial, were designed to be rooted in character—as the best mysteries often are—but more often than not, it read like a checklist of revelations the film needed to get to before moving onto the next perplexing one.

Whether or not we liked the resolutions we received or if they made sense, we cannot argue that we didn’t get answers. The Rise of Skywalker gave us a lot of the puzzle pieces, and those pieces fit together, even if it was often in a messy sort of way. But so many of those revelations often felt hollow, to the point where some critics of the film basically compared The Rise of Skywalker to two-and-a-half hours of Reddit fan theory posts compiled on-screen. The Rise of Skywalker seemed more concerned with the answers themselves than what they might have meant to most of the characters involved. Answers, but with no substance.

did this guy write The Rise of Skywalker pic.twitter.com/pZChf184PM

Part of that is by design. When The Force Awakens arrived in theaters in December 2015, part of our excitement over the new characters were the many mysteries surrounding them, from Rey’s origins (and what legacy characters she might be related to) to Snoke’s whole deal. We were deeply curious about Finn, the stormtrooper who broke free of the system that took him away from a family he’ll never know. And after he was missing from most of the film, we wondered how Luke would react to being handed his own lightsaber by Rey—as well as what led him to retreat to Ahch-To. It’s the sort of mystery box set-up that co-writer and director J.J. Abrams is famously known for, and the theories flourished in the wake of The Force Awakens‘s release.

The Last Jedi then gave us some of those answers, which, to put it lightly, remains contentious. But the mark it left on the Star Wars universe was momentous, given Star Wars’ own love of nostalgia: it gave us a flawed and jaded hero in Luke Skywalker who needed some guidance of his own and illustrated the idea that you didn’t have to come from a sacred family like the Skywalkers to be powerful in the Force. As for the latter point, The Last Jedi didn’t just do that with Rey (whose parents were nobody), but also in Temiri Blagg, the young boy on Canto Bight who grabbed the broom with the Force and held it like a lightsaber after hearing about the legend of Luke Skywalker; you might know him better as Broom Boy. There’s a message in that story, although some fans were far more interested in learning just who Broom Boy was related to.

In comparison, the revelations The Rise of Skywalker (also c0-written and directed by Abrams) sometimes feels more like a checklist than a coherent film; in reality, it might not please any of them. Despite its highs (and there are many tucked away in the film’s two-and-a-half-hour run time), it’s a treasure trove of fan theories that, at its best, expands the Star Wars universe in new and unexpected ways, and at its worst, panders to the types of viewers who ignite vitriolic backlash and harass the cast and creative team offline—as well as what amounts to a big middle finger to The Last Jedi.

Who is Rey? She’s still a nobody, but Kylo Ren tells her in one of their many conversations that’s it’s only because her parents chose to be nobody. Her parents don’t even have names; they’re more props in her backstory than characters. But she’s also a Palpatine, the granddaughter of a powerful Sith whose legacy now looms large over her, now attributing all of her power to genetics. But by the end of the film, she’s also a Skywalker, having traveled to Tatooine to bury Luke and Leia’s lightsabers in the sand and adopting the name to make her own way; she rejects her own lineage and chooses to make her own way instead. Her lineage doesn’t tangle with one option, it tangles with three. (Four if you want to loop in her Force Dyad connection with Ben Solo.)

The reveal that Rey is a Palpatine makes the story of Rey and Ben Solo—a Jedi with a Sith for a grandfather and a dark side user whose family is drawn to the light—even greater echoes of each other, although the film largely focuses instead on the push-and-pull of whether Rey will succumb to the dark side of the Force. It’s the kind of outlandish theory, one that was posited long before The Last Jedi’s release or Palpatine’s sinister laugh made its way into The Rise of Skywalker’s teaser trailer. In theory, it would’ve been a truly devastating reveal.

That is, it would’ve if The Last Jedi didn’t drive home how the Force doesn’t just belong to a handful of powerful families. That lack of a connection to explain her place in the story absolutely wrecked Rey in The Last Jedi after Kylo Ren told her, but it’s something that resonated with so many fans in the two years since we first heard it.

In The Rise of Skywalker, the Force (outside of Finn; more on him in a bit) is seemingly reduced to a power struggle, one that’s been taking place for decades, between Skywalker and Palpatine. Rey’s strength in the Force, which was once attributed to her own skill and perseverance, is now directly because of a male relative she never knew she had. “You don’t just have power, you have his power,” Kylo tells her. “You’re his granddaughter. You…are a Palpatine.”

It feels especially egregious because a certain subset of Star Wars fans have spent the past four years complaining about how unrealistic of a character Rey was because she was a girl who was untrained, yet strong with the Force despite being presented to us as a nobody from a desert planet; the idea that Rey was a Mary Sue was pushed by someone who has long received accusations of nepotism. Many of those detractors never remember that Luke too was once untrained yet strong in the Force, too, the son of a man we’d never meet (until we did). But now that Rey is a Palpatine, her strength in the Force suddenly “makes sense.” She’s no longer Rey From Nowhere, she’s Rey Palpatine, and all of the wheels start to turn.

It fuels the idea that “everybody is related to somebody” in this sequel trilogy, something further pushed by the reveal that Jannah is Lando Calrissian’s daughter who was taken by the First Order, which is relegated to the Rise of Skywalker Visual Dictionary instead of the film itself; it’s possible it was edited out in post-production. Finn’s Force-sensitivity, which was first theorized by fans after The Force Awakens, is revealed to be the reason why he—and later, Jannah and her company of soldiers—were able to break free of the First Order’s conditioning. Apart from one conversation, the film doesn’t really show Finn grappling with his newfound connection with Rey. Plus, it also puts forth the idea that only stormtroopers who are Force-sensitive have the resolve to push past their programming instead of other factors like their consciences pushing through.

And Ben Solo? Yes, the man once known as Kylo Ren does get his redemption arc, but we’re given almost no insight into Ben’s mind after his conversation with the memory of Han Solo, leaving the effectiveness of how his redemption plays out up to the viewer. And while he’s redeemed, he doesn’t get the chance to atone; he dies after he resurrects Rey, who defeated Palpatine at the expense of her own life. Not to mention the fact that The Rise of Skywalker casually reveals that Palpatine has been molding and manipulating Kylo through Snoke and the echoes of Darth Vader his entire life. We have no idea how Kylo might feel about learning that his entire life was a lie because Palpatine quickly moves on to promise Kylo the throne if he kills Rey.

Perhaps the best encapsulation of the theory-laden chaos that The Rise of Skywalker became is Beaumont Kin (Dominic Monaghan), the Resistance historian and linguist who’s proficient in Jedi and Sith lore and several dead languages. He already sticks out from most of the Resistance because well, he’s being played by Dominic Monaghan, who already had the Lord of the Rings trilogy and Lost under his belt before joining the cast of The Rise of Skywalker.

According to the Rise of Skywalker Visual Dictionary (where he gets a full two pages), Beaumont is a professor who was able to escape Hosnian Prime before the First Order destroyed it. Because of his knowledge, he’s able to help Rey translate some of the more ancient Jedi texts she scavenged from Ahch-To, and he’s become friends with Kaydel Connix and a sidelined Rose Tico. His knowledge of the Sith makes his input invaluable to the Resistance in The Rise of Skywalker.

But because Beaumont Kin is a new entity who isn’t really established all that well (and might have had a larger role in a previous version of the script), he often comes off as a random insert character who offers a mix of exposition and outlandish explanations, hoping that one would stick. He posits cloning as to how Palpatine survived after his “death” over 30 years ago and suggests that the Resistance employ the Holdo Maneuver as a way to take out the First Order in Exegol; in the case of the latter, he’s quickly dismissed.

In the upcoming weeks, months, and possibly even years, we’re going to be spending a lot of time digesting, dissecting, and analyzing the ways in which the revelations of The Rise of Skywalker affect the characters we’ve gotten to know over the past four years and the Star Wars universe at large. And sure, a lot of them might make our brains go on overdrive. But the number of theories that will emotionally resonate long after the credits roll is far fewer because the effect of a proven fan theory is only as powerful as what it means to that character. And when the biggest ramification that we’re shown is that it fuels fear of falling to the dark side of the Force, which subsides by the end of the film, that’s not going to take you very far.