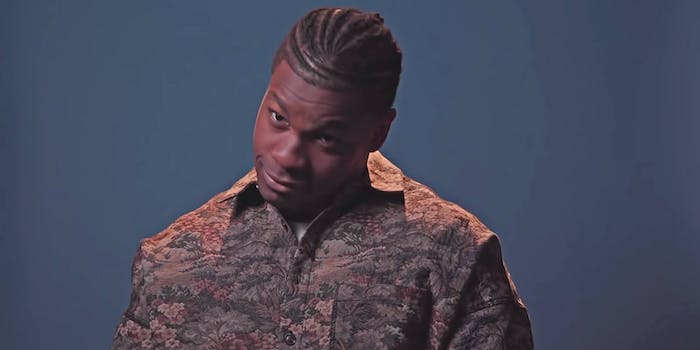 One joke on Instagram prompted a maelstrom of criticism from aggressive stans.

This post contains spoilers for Star Wars: The Rise of Skywalker.

The final installment of the Skywalker saga, The Rise of Skywalker, rounded off 2019 with a controversial bang. Just when fans thought they were free from Star Wars-related discourse for the year, franchise star John Boyega cracked a lewd joke about Rey, the saga’s protagonist, on Instagram. Now, angry stans are kicking off 2020 by trying to cancel him.

Buckle up, folks, because there’s a lot to unpack here. Let’s start at the beginning.

The joke that set the galaxy on fire

On New Year’s Eve, Boyega commented on a friend’s now-private Instagram post with a joke about Finn sleeping with Rey after Kylo Ren’s death. “It’s not about who she kisses but who eventually lays the pipe,” Boyega wrote.

Boyega’s use of the slang “laying pipe,” which is a common African-American Vernacular English (AAVE) phrase for having sex, sparked immediate outrage. Angry fans voiced their fury on Twitter, classifying Boyega’s comment as misogynistic and disrespectful.

John Boyega is so disgusting, first making a misogynistic comment and when he got called out, he made fun of the Reylo ship, a ship that left so many people heartbroken and hurt with Ben’s death. Such a childish “professional”

John Boyega didn’t back down from his comment, posting multiple tweets about him remaining unbothered by the backlash.

He asserted that Daisy Ridley, the actress portraying Rey, wouldn’t care at all about what he said.

Daisy knows she isn’t the character. Lol so tbh she doesn’t give AF.

His unapologetic stance only stoked the flames more.

Then, to troll his critics further, Boyega posted a tweet mocking Reylo, the divisive Rey/Kylo Ren ship. The tweet, sarcastically captioned “Star Wars romance 😗👀🙂,” featured four pictures of Rey and Kylo Ren at odds with each other throughout the saga.

Naturally, fans of the ship—also known as “Reylos”—were not happy. 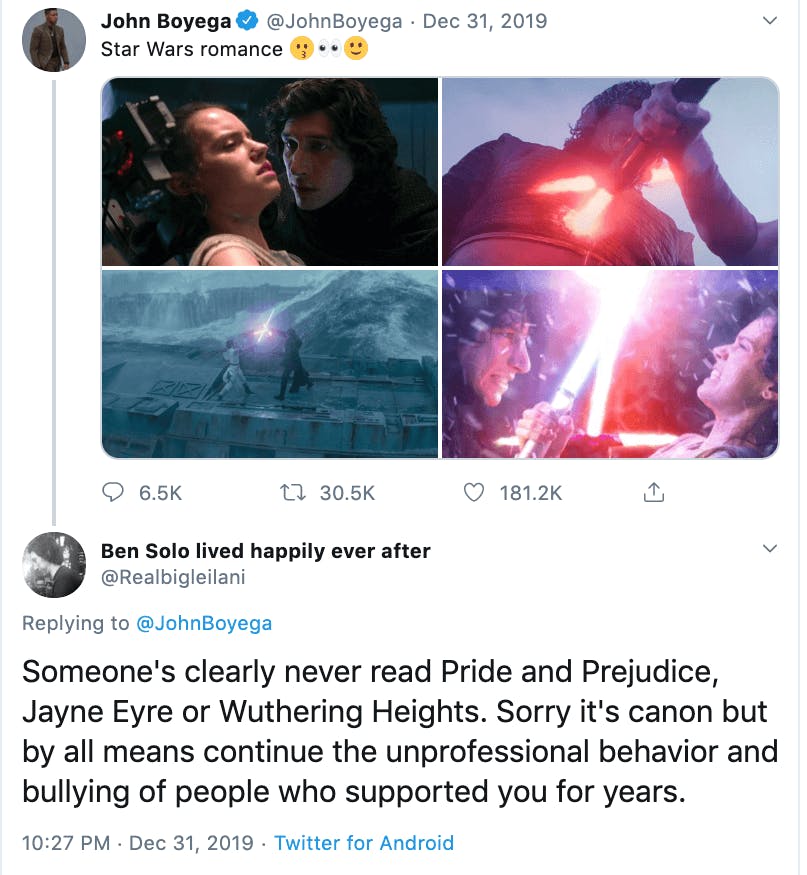 Reylo is canon FOREVER! Nobody can ever take that away from us! #Rey loves ONLY #BenSolo!

The problem with the Boyega backlash

While the complaints against Boyega generally centered on accusations of sexism, there was undoubtedly more at play here. Boyega, like his co-star Kelly Marie Tran, has had to deal with disproportionate and notably racist vitriol from Star Wars fans.

john jokes about laying pipe with rey and thats TOO far? but not all the 40 year old reylos talking about virginity, the phallic meaning of rey using his lightsaber, symbolic sex fights and kylo planting a seed in her when she was dying…… dawg i see the type of freaks you are

It’s not a coincidence that culturally Black language sparked this level of outrage. The white-coded moral panic in response to Boyega’s comment is a prime example of projecting hypersexuality onto Black people and their words; this tendency to project is often exacerbated in sexual situations involving a Black man and a white woman, a form of interracial intimacy that triggers the kind of age-old non-Black hysteria that continues to be perpetuated by enduring chattel slavery-era stereotypes.

Furthermore, white folks and non-Black people of color have a history of misconstruing and demonizing AAVE, despite their collective tendency to appropriate it. Twitter users’ righteous indignation stems from ignorance and is—again, intentionally or otherwise—a form of racist tone policing.

This is evidenced by how many people had no idea what “laying pipe” even means. Without fully understanding the phrase, many Twitter users jumped to conclusions and assigned it a predatory meaning—a classic case of villainizing a Black man.

Yeah I don't really know what 'laying pipe' means, i assume it's some kinda british slang but that's probably not it. And I know the context was that he said it in response to some comment about how ben dying means finn is available.

Other Twitter users pointed out the critics’ inaccurate interpretations. “Laying pipe” quite simply means “having sex”—not non-consensual sex, not any particular kind of sex, just sex—which, again, is a rather mild joke to make about two fictional characters in a major franchise.

What today really boils down to is that white Poole do not understand what “Laying pipe” means and that Urban Dictionary is not reliable source to translate AAVE.

That's not what "laying pipe" means and I know for a fact that y'all 1)looked that shit up on racist ass Urban Dictionary, 2) don't understand AAVE beyond literal translations and 3)have no Black friends. It's wild to watch y'all expose yourselves. Let's be better in the new year

As more people began calling out the implicit racism of Boyega’s critics, things got even more complicated. Critics defended themselves, saying the first person to call him out was a Black woman.

First person to call him out for this was a black woman so no. Bye, Felicia.

…Who isn’t actually a Black woman at all. The person behind the account is blackfishing, or pretending to be Black on social media.

THE ACCOUNT THAT YELLED AT JOHN BOYEGA ABOUT SEXISM WAS POSING AS SOME BLACK GIRL FROM INSTAGRAM. THEY ARENT ACTUALLY BLACK PLS HELP ME pic.twitter.com/ZpAbQNQjx7

You’re a troll account posing as a black woman. Cut the shit.

Obviously, Boyega’s critics weren’t exactly off scot-free, especially because the majority of them were Reylos. And Reylos don’t exactly have a pristine relationship with race or even healthy ships.

The fraught history of Reylos

Toxicity is an inevitable part of fandom, regardless of the franchise. However, Reylos truly push the boundaries of poisonous fandom. Whether they’re sending death threats to J.J. Abrams for killing off Kylo Ren/Ben Solo or they’re harassing Star Wars actors day and night, Reylos are certainly obsessed with their ship to a legitimately worrying degree.

Reylo fans are going to therapy, not eating, & skipping work bc they're "traumatized" Kylo Ren died.

At the TROS premiere, one left hysterical telling a SW actress to "get hit by a car, whore" bc the actress wouldn't yell at JJ in person.

All this over a fictional character. pic.twitter.com/6bGuOqSUlG

Moreover, the very nature of a Rey-Kylo pairing is disturbing in and of itself. Kylo Ren repeatedly exhibited textbook abusive behavior throughout the sequel trilogy, so much so that Daisy Ridley herself condemned the ship. She (rightly) called Kylo and Rey’s relationship “toxic” emotional abuse.

Many fans share Ridley’s sentiments through the #antireylo hashtag on both Twitter and Tumblr. While quite a bit of anti-Reylo discourse focuses on the ship’s dangerous dynamic, there are unmistakably racist implications of shipping anyone with a space Nazi—especially in favor of a decidedly non-Nazish character of color like Finn. Shipping in and of itself is all well and good, but some degree of analysis is necessary when romanticizing a genocidal abuser. (And no, calling the leader of the First Order a “space Nazi” isn’t a stretch. That’s precisely what J.J. Abrams was going for.)

Unfortunately, not only do Reylos actively romanticize this very relevant form of evil, but the popularity of Reylo exists in direct contrast to the scarcity of ships involving literally any characters of color. While this obviously doesn’t mean every single Reylo supporter is racist, all these factors combined result in the kind of widespread racism the likes of which Boyega just endured—or worse. The problem is serious enough that several Finn-Rey shippers have reported being sent violently racist lynching photos.

A few Tumblr users even collaborated on an extensive list of racist incidents from the Reylo corner of the universe.

All in all, it’s time for Boyega’s critics to examine their own biases, especially if their peers pretend to be Black in order to make a misguided point. Some things really aren’t that serious, folks. Ponder your outrage before you weaponize it.