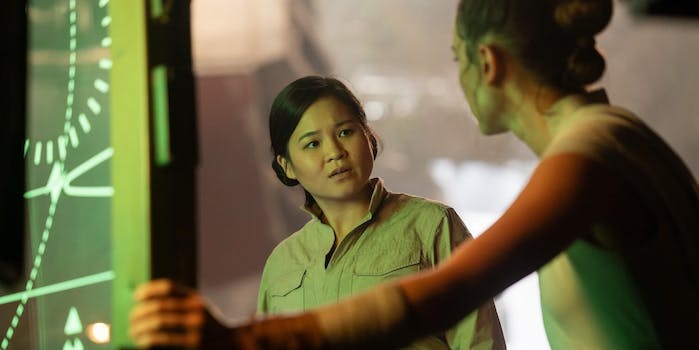 Where is Rose Tico in ‘The Rise of Skywalker’?

Without going into spoilers, here's what to expect if you're worried about Rose's role.

While Kelly Marie Tran made a splash at the Rise of Skywalker premiere, Rose Tico was worryingly absent from the film’s trailers and merchandise, leading fans to wonder if she had a smaller role. So without going into any major spoilers, this post will answer one question only: What’s up with Rose Tico?

Unlike The Last Jedi, where Rose basically has equal importance to Finn or Poe, she’s a background character in The Rise of Skywalker. She appears in several scenes, but her role is roughly akin to Snap Wexley, the X-Wing pilot J.J. Abrams created for his friend Greg Grunberg to play. She’s a familiar face in the Resistance, but all her dialogue is basic exposition about star maps or battle strategy.

With an extensive ensemble cast, The Rise of Skywalker offers key parts to vintage supporting characters like Chewie and C-3PO, while Rose Tico is reduced to an almost meaningless role. The Star Wars franchise is famous for giving memorable parts to characters with relatively little screentime (like Babu Frik and Zorii Bliss), that isn’t what happened here. Rose Tico is present, but she doesn’t do anything cool, or have any new character development. She briefly interacts with Finn, but there’s no meaningful acknowledgment of their relationship in The Last Jedi.

Honestly, Rose’s reduced screentime feels insulting considering the popularity of the character, her role as the first Asian female lead in the franchise, and the amount of harassment Kelly Marie Tran endured after The Last Jedi. Rose Tico was a key target of sexist and racist backlash, resulting in a hate campaign against the actress. J.J. Abrams is clearly more interested in characters he created (like the Knights of Ren) than anything we saw in The Last Jedi—which is fair enough because hey, he’s the one making this movie, not Rian Johnson. But by sidelining Rose to this degree, The Rise of Skywalker feels like it’s catering to bigots.

Disney spent the past four years promoting the sequel trilogy as a diverse, inclusive new era for the franchise. While the earlier films predominantly focused on white men, plus one white female lead (Leia or Padme), the sequels are far more diverse in terms of race and gender. Conventions and movie premieres are now full of people cosplaying as Rey, Finn, Poe, and Rose. The actors have spoken extensively about the importance of representation in such an iconic Hollywood franchise, and the resulting backlash is very familiar: Conservative white men are panicking because they’re no longer the center of attention.

As a microcosm of the problems surrounding The Rise of Skywalker and Star Wars fandom, Rose Tico’s lack of screentime is guaranteed to be divisive and upsetting for many fans. Along with her groundbreaking status as an Asian female lead, Rose represented a key theme in The Force Awakens and The Last Jedi, the idea that everyday people can have just as much impact as royalty and superpowered Jedi. The Rise of Skywalker basically abandons this idea, and prioritizes legacy characters like C-3PO above Rose Tico’s emotional and thematic importance. Even if there wasn’t time to make her a central character alongside Rey, Finn, Poe and Kylo Ren, J.J. Abrams and co-writer Chris Terrio could’ve used her five minutes of screentime for something memorable. But they didn’t.