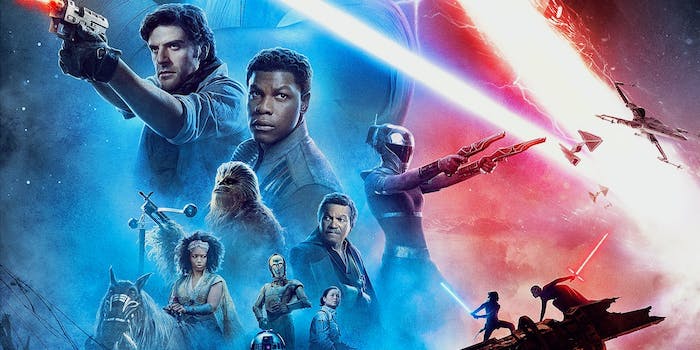 Who died in ‘Star Wars: The Rise of Skywalker’?

Which characters didn't make it out of the final installment of the Skywalker Saga?

Star Wars: The Rise of Skywalker brought a definitive end in the war between the Resistance and the First Order, ending on a scale of epic proportions as Emperor Palpatine tried to enact his plans to take over the entire galaxy. It ultimately failed, resulting in a final victory for the Resistance, but everything that led up to it—and the final victory itself—came at a major cost.

Heroic deaths and sacrifice are a quintessential part of any Star Wars film, and The Rise of Skywalker is no exception to that. The film easily pulls out its fair share of emotional gut punches, giving us several deaths that will likely bring out the tissues. But amid the chaos and heaps of plot that is the final film in the Skywalker Saga, it also had several fake-outs (like Chewbacca) along with two instances of Force healing set to reverse what looks like imminent death. And that’s before you count the chaos of the final battle on Exegol, the Unknown Regions planet where a decrepit and zombified Emperor Palpatine held court.

Who lived? Who died? And who makes it to the end to tell that story?

Who died in Star Wars: The Rise of Skywalker

Cause of Death: Decapitation by the First Order

Boolio’s appearance is brief and tied specifically to a single scene at the beginning of the film. He’s the middleman between the Resistance and a First Order spy who’s willing to risk it all to pass on vital information to the Resistance about Palpatine’s return on Exegol. “Win the war,” he says when Finn asks what he can do to repay them.

Only, Boolio doesn’t get to see the day that the war is won. Soon after helping the Resistance, his head is placed on a table during a meeting between top First Order officers, and Kylo Ren reveals to the officials that there is a mole within their midsts.

Cause of Death: Complete memory wipe (until an older version of himself is restored)

Technically, C-3PO didn’t die in the traditional sense in that he was destroyed beyond repair by stormtroopers or anything like that. His loss—particularly for Rey, Finn, and Poe—is more emotional and internal.

Threepio’s able to translate the Sith language on a dagger the trio finds on Pasaana, but his programming prevents him from actually offering that translation. They travel to Kajima so that Babu Frik is able to break through Threepio’s code so that he can provide the translation. As a result, Threepio’s memory is wiped, but the effect is only temporary. After returning to the Resistance base, R2-D2 reveals he has a slightly outdated backup of Threepio’s memory, which brings him to some time after The Last Jedi when he’s about to go on his first mission with Rey.

Cause of Death: Gunned down by Ochi, who was looking for Rey

At the end of the saga, we learn that Rey’s parents—an unnamed woman played by Killing Eve’s Jodie Comer and a nameless man who is the son of Emperor Palpatine—didn’t sell her for drinking money. They walked away from Palpatine’s legacy, and when they learned that he wanted to come after her, they hid her away on Jakku for her protection. “You were no one, they chose to be to keep you safe,” Kylo explains. “They sold you to protect you.”

They were both later gunned down by Ochi, who was tasked with retrieving Rey by Palpatine, but his mission failed. Ochi ended up dying in a Pasaana cave.

Cause of Death: Shot with a blaster by Allegiant General Pryde

General Hux has been one of the most recognizable faces of the First Order since the beginning of the sequel trilogy, a zealot who will stop at nothing to take down the Resistance. But we later learn that he’s the First Order spy—he literally says, “I’m the spy!”—when he shoots the three First Order stormtroopers who were ready to execute Finn, Poe, and Chewbacca on Kylo Ren’s Star Destroyer. He later asks Finn to shoot him in the arm to make their escape look like a struggle, but Finn shoots him in the leg instead.

His act is an entirely selfish one. Hux doesn’t care about the war, he only wants to see the Resistance take out his boss. His actions helped paved the way for that eventual victory, but it also came at a cost. He tried to lie about what happened, but Allegiant General Pryde figured it out and shot him for his betrayal.

Cause of Death: Using the last of her energy to make one last connection with her son

Leia’s role in The Rise of Skywalker was put together through unused footage of Carrie Fisher from The Force Awakens, which helped give the general one final send-off. At times, it’s awkward, but it ties together during Rey and Kylo’s final lightsaber battle against each other atop the wreckage of the second Death Star. When it looks like Kylo is about to get the upper hand and kill Rey, Leia connects with him through the Force to call him home with a simple “Ben.”

The effort kills her, but it distracts him enough for Rey to stab him with his own lightsaber. You can also argue that she facilitated Kylo’s connection with the memory of Han Solo, although that could also be explained as a hallucination.

Cause of Death: Stabbed by Rey with his own lightsaber and closure that’s given to him by the memory of his father

Technically, this is more of a symbolic death than a physical one; Rey, who’s shaken up at what she just did, almost immediately heals him with her own life Force. But the appearance from Han drives it home.

Kylo and Han essentially rehash their final conversation, albeit with a few tweaks. Nobody dies, Kylo gets the closure and redemption he’s sorely needed. And once Han disappears, Ben throws away Kylo entirely by tossing his lightsaber into the churning sea.

Cause of Death: Blown up X-wing in battle

We’ve seen so many major battles throughout the Star Wars saga that give us up-close views of the pilots flying the ships, only for them to be killed shortly after. Snap—Black Squadron’s second-in-command after Poe—is by far the character we’ve known the longest (but is still a fairly minor character) who’s gone out this way.

The biggest sense of irony from Snap’s death is that shortly after, Lando and Chewbacca arrive in Exegol with the endless number of ships from all corners of the galaxy who want to take out the First Order. On one of those ships is Wedge Antilles, the Rebellion pilot who fought alongside Luke (and is now the only survivor of the Battle of Yavin) and, in the tie-in novels, became Snap’s stepfather after marrying his mother Nora.

8) All six Knights of Ren

Cause of Death: Killed by Ben Solo through a mix of the Force and Luke Skywalker’s lightsaber

After fan complaints that The Last Jedi completely dropped the Knights of Ren, we finally got more of them, although we don’t exactly learn anything of substance about them. They were loyal when Kylo Ren reigned supreme, but by the time that Ben Solo arrives on Exegol, they’re by Palpatine’s side and prepared to take out their former leader.

Ben only has a blaster with him and the Force, so he’s initially overpowered by them all. But a Force connection between Rey and Ben allows Rey to give him Luke’s lightsaber to aid him in his battle against them, and he soon makes quick work of the Knights of Ren.

Cause of Death: He’s incinerated when his Star Destroyer is blown up

When Ben Solo turns away from the First Order, Pryde, who once served the Empire, is essentially left in charge of everything, including communication with Palpatine. He directs the First Order ships to Exegol and, once he figures out that the Resistance is trying to take out the signal meant to direct the Emperor’s Imperial fleet out of the Unknown Regions, he directs the signal to be placed on his ship instead.

That meant a target is placed on his back as Finn and Jannah, both former stormtroopers, risked everything to ensure that the signal—and that ship was destroyed for good—along with the First Order itself.

Cause of Death: Rey directs his lightning attack back at him with Luke and Leia’s lightsabers with help from the Jedi who came before her

Once Rey arrives on Exegol, Palpatine spends much of his time goading his granddaughter into killing him. He doesn’t necessarily want to die, but like with Luke before her, his death will ensure a Jedi’s dark turn; while Luke would help rule, Rey’s ascension would mean the rise of an Empress Palpatine. Rey is almost tempted, at least until she senses Ben’s arrival and purpose. But once Rey and Ben face him, Palpatine sucks enough life force out of them to gain the ability to walk on his own and decides to rule instead.

He blasts Ben off the side of a cliff and turns his attention to Rey. But she stands against him, finally able to connect with the previous Jedi like Luke, Anakin, Obi-Wan Kenobi, and many more across the galaxy. The combined effort destroys Palpatine.

Cause of Death: Taking out Palpatine (until Ben resurrects her)

Rey takes out the Emperor once and for all with his own lightning, but the effort of doing so kills her. She’s incredibly weakened after the fight, so once he’s gone, she drops the lightsabers and falls. Finn, who’s revealed to be Force-sensitive in the film, feels her death once he and Jannah are on the Millennium Falcon.

Ben survived his fall over the edge of the cliff, and while severely weakened, he climbs his way out. But it’s only to discover that Rey didn’t make it. Taking her into his arms, he grounds himself and performs the same healing move that she did on him before, which works.

Cause of Death: Uses his own life Force to bring Rey back and becomes one with the Force

We don’t yet know the exact nature of Force healing and the cost of bringing back someone from the dead, so it’s possible that Ben’s death was because his Force healing was a resurrection over him healing a mortal wound; if the latter, he was also considerably weakened by Palpatine. But the effort to bring back Rey leaves him alive long enough for Rey and Ben to share a kiss and a smile before he falls too.

His body disappears, as does Leia’s (and Luke’s, Obi-Wan’s, and Yoda’s before them), and they both become one with the Force. Ben doesn’t appear alongside Luke and Leia before Rey on Tatooine, so we don’t know if he will have the ability to become a Force ghost. But he managed to find peace before the end.