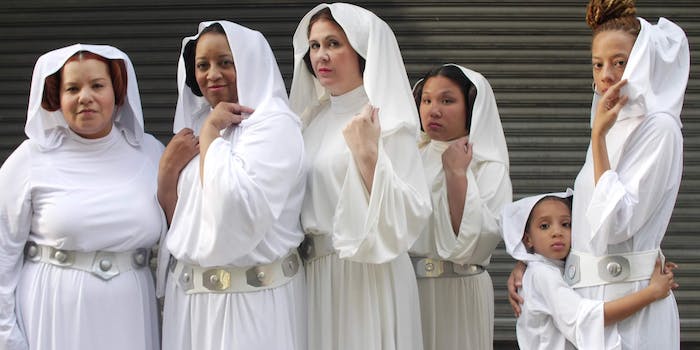 The docuseries reminds us what's so great about 'Star Wars.'

This article contains spoilers for Star Wars: The Rise of Skywalker.

What a year the past month has been in the galaxy far, far away.

Star Wars: The Rise of Skywalker, a film that Disney hoped would unite fans after The Last Jedi appeared to drive a wedge into the fandom, divided it even further. The nostalgia felt both familiar and completely pandering, the fan theories attempted to please everyone (which was iffy at best in execution), and many fans became upset with how certain characters were treated. Pretty much everything that co-writer Chris Terrio has said to explain some of the film’s choices have seemingly made it worse. Add in an unverified Reddit rumor that became a wish-fulfilling hashtag and gatekeeping at its worst, and it’s already a chaotic start to a post-Rise of Skywalker world.

None of this is new, of course. Star Wars fandom has been debated and pushed back at itself for decades. Some fans hated Empire Strikes Back back in the day, and we’ve already had a retrospective on the prequels. We’ve seen some kind of backlash on just about every element of every Star Wars film, some of it harboring on harassing the franchise’s stars (and that’s not something unique to the sequel trilogy, either) to the most minor of details. And then there is something of an identity crisis that arises after a predetermined ending. (At least, until the next franchise kicks off.)

It’s enough to argue for tapping out of Star Wars completely, and I wouldn’t blame you if you wanted to. But fandom contains multitudes: As much the more toxic subset constantly reminds us how terrible fandom can be, there is just as much to showcase the best fandom has to offer. And nothing encapsulates that more than Looking For Leia.

Looking For Leia is a seven-part docuseries from director Annalise Ophelian that looks at the impact that Star Wars has had on women and nonbinary fans of the series. As Ophelian explained on the docuseries’ website, Looking For Leia started out as “an exercise in shifting the traditionally cis male narrative of geekdom to tell the story from another set of perspectives,” but it grew to encompass the many, many different ways people have embraced Star Wars fandom. With episodes ranging from 10 to 15 minutes, you can easily watch the entire docuseries in less time than it takes to watch a single Star Wars film.

It doesn’t just showcase the fact that people had their lives changed because of Star Wars, although it does plenty of that. Throughout the seven episodes, we’re shown over and over again that, despite what a largely dunked-on belief that you have to watch and read every single Star Wars story to be a “true” fan, there is no one correct way to be a Star Wars fan. And women and nonbinary Star Wars fans aren’t just a recent development; they’ve always been there, and they’re not going anywhere.

It’s a simple message, but it’s often an important one. And although Looking For Leia shows us many of the highs of Star Wars fandom, it doesn’t shy away from the lows. Sexism and racism still persist; older fans often felt they had to hide their fandom. In some regards (such as its lack of LGBTQ representation in the films), Star Wars is still largely restricted by real-world limitations.

It doesn’t matter which films or TV shows drew you in; each new trilogy has enticed fans of all ages. It doesn’t matter how you express that fandom, although Looking For Leia highlights geek fashion, builders, fanart, photographers, and cosplayers as just some of the ways that people have shown their love of Star Wars.

Because despite snide comments about the irrelevance of Star Wars, it’s always had the capacity to change lives. A New Hope became the first film to be translated into Navajo, which preserves the language for future generations. Younger fans can become inspired just by seeing what other fans have done. And watching Leia Organa at the center of a space opera as a self-rescuing princess who later became a general allowed many fans to see themselves on-screen in ways they were never able to before.

“A lot of strong female characters exist, and a lot of beautiful princess characters exist,” author Amanda Cherry explained early in the final episode. “And Princess Leia is that intersection. Leia is the and character. Especially growing up in the ’80s and early ’90s, you got one or the other. You got Ripley, or you got Ariel. You didn’t get both.”

Several decades later, we’d have that experience again and again with the introduction of characters like Rey, Finn, Poe Dameron, Mace Windu, Jyn Erso, Cassian Andor, Bhodi Rook, and Ahsoka Tano, just to name a few. They could rescue themselves, become the hero, and ignite the spark. Looking For Leia gave us a taste of the influence Star Wars had on many of its fans over the past 40 years. But in the next 42 years, the possibilities are even greater.

All seven episodes of Looking For Leia are now streaming on SYFY.com and YouTube.