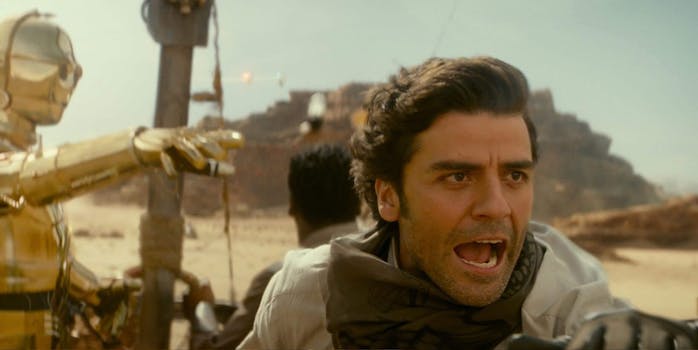 A lot of fans will have serious issues with a new element of Poe's backstory.

This post includes spoilers for Poe Dameron’s character arc in The Rise of Skywalker.

Like many elements of The Rise of Skywalker, Poe Dameron’s role backtracks on what we saw in The Last Jedi. As I discussed in my review, the film derails Poe’s arc in order to present him, Rey, and Finn as a trio, following in the footsteps of Han, Luke, and Leia. The dynamic isn’t as satisfying as fans probably hoped, resulting in a noticeable change to Poe’s personality. On top of that, there’s a more troubling issue: Poe’s new backstory.

We knew beforehand that The Rise of Skywalker would introduce Zorii Bliss (Keri Russell), a smuggler with a mysterious role in Poe’s past. There was a lot of speculation that she would be an ex-lover (which she is), a controversial choice because many fans wanted Poe to be canonically queer. However, I was more irritated by a different revelation: Apparently Poe himself was also a spice-runner, working with Zorii’s criminal gang. After introducing Poe as the first Latino lead in the franchise, writer/director J.J. Abrams just turned him into the Star Wars equivalent of a heroin smuggler.

“Spice” is clearly coded as a narcotic in Star Wars canon, and there’s a thoughtlessly racist subtext to the out-of-nowhere revelation that Poe used to be a spice-runner. Unlike Han Solo’s criminal history, it also feels totally out of character. We already know that Poe traveled extensively on missions for the Resistance, and it’s perfectly plausible for him to have contacts (and even ex-lovers) in the criminal underworld. We even meet some of his other acquaintances in the Poe Dameron tie-in comics. However, there’s no reason to rewrite his history and make him into a drug smuggler himself. The entire Zorii Bliss subplot could’ve existed without including that detail.

Abrams seemingly wanted to give Poe a dark backstory to balance out his squeaky-clean image, but that’s totally unnecessary after The Last Jedi. The whole point of Poe is that he remains idealistic and heroic in the face of impossible odds, in the midst of a horrifying war. He’s an old-school adventure hero who was once a star in the Republic Navy, and he defected because he felt a moral obligation to join the Resistance. The Last Jedi illustrated how his cockiness could lead to disaster, in a storyline that saw him fail as a leader and then pick up the pieces. That’s his morally ambiguous backstory, told in a way that actually fits his personality and background.

Based on previous canon, fans may be confused where Poe’s spice-smuggling period fits into his timeline. Up until now, we knew that his parents were Rebel fighters, and he trained under Wedge Antilles in the New Republic Defense Fleet, becoming a star pilot and rising through the ranks to command Rapier Squadron. During the rise of the First Order, Leia recruited Poe to the Resistance, followed by a few of his fellow X-Wing pilots. He becomes a Resistance pilot, undercover agent, and eventual commander, and by The Force Awakens, he’s 32 years old. It’s hard to see where he could fit in a drug-smuggling career, but we get an answer in the Rise of Skywalker Visual Dictionary. Apparently he joined the Spice Runners of Kijimi as a “teenager runaway,” before realizing the error of his ways and returning home. Zorii Bliss was a mentor figure, and (judging by the actors’ ages) was probably a little older than Poe.

Unnecessary, out of character, and subtextually playing into racist stereotypes, Poe Dameron’s new backstory is a frustrating creative choice. You have to wonder if this is why Oscar Isaac seemed kind of disgruntled while promoting the movie.