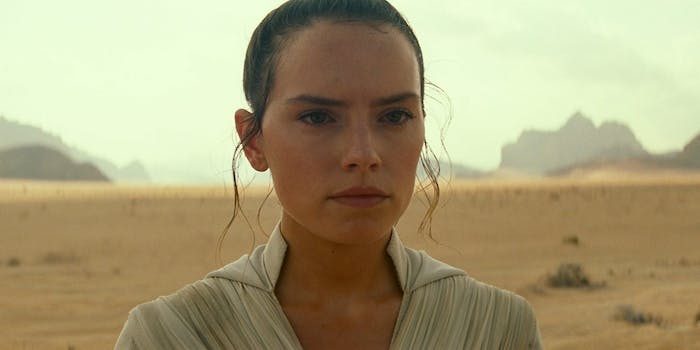 Why did Rey bury those 2 lightsabers on Tatooine?

The scene makes no sense in context, and neither does the explanation from screenwriter Chris Terrio.

The more you think about The Rise of Skywalker’s final scene, the less sense it makes. Not the whole “Rey Skywalker” thing, which feels like an appropriate end to Rey’s search for family and identity. No. We’re talking about the lightsabers, and the baffling choice to have Rey travel to Tatooine in the first place.

That last scene sees Rey return to Luke’s childhood homestead, where she buries Luke and Leia’s lightsabers in the sand. She then ignites her new yellow lightsaber, symbolizing her unique role in the lineage of the Jedi, and hinting at a new era of balance in the Force. The final shots involve her revealing her new surname, which is welcomed by the ghosts of Luke and Leia. Like many creative choices in the film, this whole scenario was orchestrated as a springboard for self-referential nostalgia, but instead of feeling like a natural conclusion, it’s kind of weird and forced.

To start with, why Tatooine? Speaking to The Hollywood Reporter, the film’s co-writer Chris Terrio gave this explanation:

“Alderaan is gone. So, [Leia] could never take Luke to see where she grew up as a princess, but Luke could’ve taken Leia to see where he grew up as a farmer. But, the twins never got to Tatooine together (to visit Luke’s childhood farm). So, the idea of seeing the twins together after the sabers are laid to rest felt like it was something that was very moving to me and J.J.”

“Rey brings the sabers there to honor the Skywalker twins by laying them to rest—together, finally—where it all began. The farthest planet from the bright center of the universe, but a beautiful and peaceful place to bury two sacred objects.”

At a stretch, you can acknowledge that Luke had a comfortable childhood with Aunt Beru and Uncle Lars on Tatooine. But after they were killed by Stormtroopers in A New Hope, there’s no sign that Luke had any desire to return. In fact, Tatooine is consistently portrayed as somewhere people want to leave. Anakin was enslaved there at a young age, and there’s no indication that slavery ended since then. Ignored by the various governments who rise and fall during the nine-film Skywalker Saga, Tatooine is beset by poverty, organized crime, and regular attacks from Jawas and Tusken Raiders. Leia’s main memory of the planet is being kidnapped by Jabba the Hutt and chained up in that infamous bikini.

The only people who feel nostalgia for Tatooine are us, the audience. Not the characters themselves, who either have no positive memories of the planet (Leia) or spent most of their time there wanting to leave (Luke). As a teenager, Luke’s main aspiration was to enlist in the Imperial fleet so he could escape Tatooine and become a pilot. Rey would personally find this very easy to understand, because she hated living on Jakku. She has no reason to believe that Tatooine would be a “peaceful” resting place for Luke, never mind Leia. If a nostalgic callback was really necessary, it would make more sense to bury those sabers on Endor.

The “Why are we on Tatooine?” question is the biggest problem here, but really the whole scene is made up of weird choices that make no narrative sense. For instance, take Rey’s lightsaber. The filmmakers want her to have a new saber, partly for the symbolic reasons mentioned above, and partly (let’s be real here) because it will sell more merchandise for Disney. So Rey ignites her yellow lightsaber, just so she can… look at it, I guess? Because she doesn’t actually need to use it. The film also never explains where it came from, although she supposedly built it from her old staff.

J.J. Abrams and Chris Terrio wanted to end the movie with a scene that brings the story full circle, but the end result was totally disjointed from the narrative arc of Rey and the Skywalkers. The image of Rey looking out into the Tatooine sunset may provide a kick of nostalgia for longtime fans, but as soon as you think about it, it falls apart. Compared to the more organic callbacks in The Force Awakens (Jakku, Kylo Ren, the return of Han Solo), it’s a mess. It’s honestly bizarre to consider how many moments in The Rise of Skywalker don’t stand up to scrutiny like this, when the previous two movies were so thoughtful and thematically coherent.