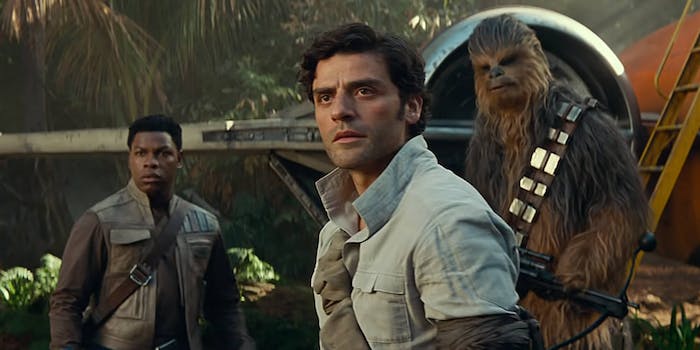 Details of a brief scene in 'Star Wars: The Rise of Skywalker' are raising some eyebrows.

This article contains a minor spoiler for Star Wars: The Rise of Skywalker.

A couple of weeks ago, Star Wars: The Rise of Skywalker director J.J. Abrams confirmed that there wouldn’t be a romance between Finn and Poe in the film, noting that their relationship “is a far deeper one than a romantic one.” And while Abrams teased some kind of queer representation in the film, initial reports from the film are starting to reveal what that looks like in the Star Wars universe.

Many critics and fans alike groaned at the prospect of the usually spoiler-averse Abrams teasing queer representation in his film. Not because they didn’t want queer representation—far from it—but rather it felt egregious to tease something like a character’s sexuality like it’s a secret, spoiler-laced reveal. Some speculated that if we weren’t getting a Finn/Poe romance, it would involve a minor character or two. And once people began seeing The Rise of Skywalker for themselves, that very much turned out to be the case.

Also, I can confirm there is queer representation in #StarWars #TheRiseofSkywalker. It lasts maybe two seconds, and you may miss it entirely. Welp.

But two days before the U.S. release of The Rise of Skywalker, the Hollywood Reporter provided additional details about the moment in question.

“In a celebration sequence in the film, two female members of the Resistance share an exuberant kiss during the joyful moment,” the article reads. “They are minor characters and not heavily featured in the film.”

Technically, it’s historic in that we’ve never seen a same-sex kiss in a Star Wars film before. The moment appears to be brief in nature, but those who’ve seen the film—and the scene in question—are already rolling their eyes at how the moment is being framed. “I sincerely cannot wait til people see the film and learn how insulting it is for the moment in question to even be generating press like this,” Vanity Fair critic K. Austin Collins wrote in response.

If this set-up—a minor and possibly unnamed character with a small role in a major blockbuster that exists almost solely to show that there is a queer character in the movie—feels familiar, it should. We infamously saw it eight months ago in Avengers: Endgame, in which co-director Joe Russo plays an unnamed civilian (who is called “Grieving Man” in the script) who talks about going on his first date in five years; in the script, Grieving Man uses “his” and “him” when discussing his date.

At the time, fans largely mocked the Russo brothers for the cameo and were insulted for being expected to feel grateful for the smallest of roles. When compared with Infinity War and Endgame’s treatment of Steve Rogers and Bucky Barnes, who barely acknowledged one another despite a decades-long friendship and huge emotional stakes for seemingly no reason other than to stop encouraging a slash ship even more, it felt like a slap in the face.

It’s basically what I’m calling the Russo Rule. Although Endgame is far from the first film to want credit for putting in the bare minimum of queer representation. There have been many, many, often insulting attempts to claim LGBTQ representation in films where it’s practically non-existent in recent years; LeFou in the live-action Beauty and the Beast remake often gets cited for the ridiculousness of the praise to presence ratio. But what the creative minds behind Endgame and now The Rise of Skywalker end up doing is discussing LGBTQ representation and emphasizing how important it is.

Which is pretty much what Abrams does when asked about queer representation in The Rise of Skywalker. (And when people find out how minuscule that moment is in context, the backlash follows.)

“[I]n the case of the LGBTQ community, it was important to me that people who go to see this movie feel that they’re being represented in the film,” Abrams told Variety earlier this month.

Essentially, the Russo Rule is more like a way to showcase just how low the bar for queer representation is in major blockbusters (and how often even that isn’t passed) rather than a test to pass or fail; it doesn’t have to hit every aspect, either. In more inclusive films, we’d have relationships of all kinds to the point where a baseline is pointless because, well, it’s a reflection of life. But queer representation is practically nonexistent in major blockbusters unless fans create their own stories, and queer characters are mostly minor characters.

You might have a film that is following the Russo Rule if:

The lack of queer representation is especially an issue in a galaxy far, far away, where it’s been hinted at or relegated to the background characters. During the promotion of Solo: A Star Wars Story, co-writer Jonathan Kasdan said that Lando Calrissian was pansexual, which isn’t supported within the text of the film. (Donald Glover, who played a young Lando in the film, agreed.) Outside of several official tie-in novels and comics, which often have a smaller reach than the films or TV shows, LGBTQ representation in Star Wars is practically non-existent; it wasn’t until after Star Wars Resistance was ending that the creative team confirmed that two minor male alien characters were in a relationship with each other.

And it’s not like the cast and creative team working on Star Wars projects haven’t been sympathetic to fans asking for the films to reflect their own world. When speaking about Lando’s sexuality last year, Kasdan said that he “would have loved to have gotten a more explicitly LGBT character into this movie.” During a 2016 pre-Oscars event, Abrams, who was still on a post-Force Awakens high and wouldn’t be tasked with co-writing and directing Episode IX for at least another year, said that “it seems insanely narrow-minded and counterintuitive to say there wouldn’t be a homosexual character in that world.” (In the aftermath of Abrams shooting down a Finn/Poe romance, Abrams’ quotes resurfaced, largely to be mocked by fans.)

Isaac, who’s been supportive of fans who’ve shipped Finn and Poe together for years (and has stated that he portrayed those subtle romantic elements between the two characters in The Force Awakens), lamented that The Rise of Skywalker didn’t take Finn and Poe’s relationship in that direction.

“Personally, I kind of hoped and wished that maybe that would’ve been taken further in the other films, but I don’t have control,” Isaac told Variety. “It seemed like a natural progression, but sadly enough it’s a time when people are too afraid, I think, of… I don’t know what.”

The fact that we do get queer characters in blink-and-you’ll-miss-it moments of representation in Endgame and The Rise of Skywalker is technically historic. Even 10 years ago, it’d feel more monumental. Now, queer representation is teased out as something for keen-eyed fans to look out for. It’s gamified for those in the know, almost like a well-hidden Easter egg for fans to hide, especially when they’re included in a big group scene, and it’s almost setting people up for disappointment—especially people who’ve been avoiding spoilers for weeks who hear about this plot point but might have missed the interview where Abrams shoots down the Finn/Poe ship. Queer representation is still treated as something to be afraid of, whether it’s because of international markets, fear of conservative backlash within the U.S., a combination of the two, or something else entirely.

In the MCU at least, it looks like the tides are changing. Marvel Studios head Kevin Feige confirmed a few months ago that there is a gay lead in The Eternals. Valkyrie is finally allowed to be bisexual in Thor: Love and Thunder after Marvel cut a scene that confirmed her bisexuality in Thor: Ragnarok. It’s possible that these two women in The Rise of Skywalker could spawn their own legion of fans, kind of like how Star Wars fans rallied behind Jessika Pava after The Force Awakens came out. But outside of those canonical books and comics that already feature queer people as major characters without humans, aliens, and droids blinking an eye, this might be all fans are going to get until we reach the next phase of Star Wars films.