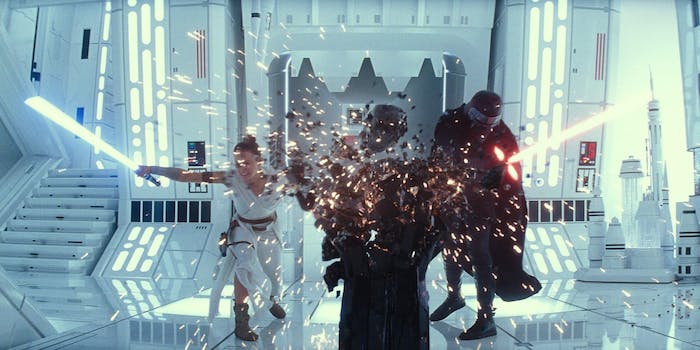 Comments from a new profile have led to fans relitigating a two-year-old film.

Nearly two years after its release, the internet still can’t stop Star Wars: The Last Jedi, a film that upended nearly everything we knew about Star Wars and launched a vitriolic response from a small (but very vocal) portion of fans that included harassing one of its stars off of social media. And with The Rise of Skywalker on the horizon, that debate is making its way around yet again after a couple of out-of-context quotes went viral.

Like the stars of the MCU and every other Star Wars film before it, the cast and crew of The Rise of Skywalker have the nearly impossible task of promoting a film that they aren’t really allowed to talk about. They can discuss things like what’s been revealed in trailers (e.g. Dark Rey or the reemergence of Emperor Palpatine), where the characters find themselves at the beginning of the movie, how J.J. Abrams came back to direct Star Wars and factored unused footage of Carrie Fisher into the film, and general themes; they can even joke about a script that briefly ended up on eBay. If the film is also the final part of a story, like The Rise of Skywalker is, they can look back at the franchise and the trilogy as a whole.

But they can’t really get into most aspects of the actual film until after people see it; they want people to experience the movie in theaters, and most fans probably don’t want to be spoiled for the film before they see it. So the questions the cast and crew receive over and over again throughout the press tour are either entirely inconsequential (Baby Yoda is a very safe topic) or are about the films that came before it. And because the Star Wars film that came before The Rise of Skywalker happened to be very controversial, those quotes have more potential to be scrutinized for fans that scrutinize every new piece of information.

That was the case with a New York Times profile on The Rise of Skywalker, which delved into what it took to make The Rise of Skywalker after replacing the film’s original director Colin Trevorrow, Fisher’s death, and how to wrap up a nine-film franchise in a movie that also worked to end a trilogy and as its own film. For Abrams, that meant looking at how to pick up where Rian Johnson left off in The Last Jedi, something he’s discussed at length.

Although Abrams has been open about the fact that The Last Jedi didn’t derail the overall story he wanted to tell in the sequel trilogy and has publicly praised Johnson and The Last Jedi, two screengrabbed quotes from the New York Times profile have gone viral that—when taken out of context—look as though the cast and crew are throwing The Last Jedi under the bus.

The first screengrab features a quote from Abrams and comments on the meta-commentary of The Last Jedi. He praised the film’s ability to subvert expectations but acknowledges how that might frustrate people. The second screengrab featured quotes from stars Daisy Ridley and John Boyega reacting to Abrams returning to direct The Rise of Skywalker after Trevorrow’s firing. For Ridley, that meant stability for the film, and Boyega was pleased that Abrams got to finish his story he started planning with The Force Awakens.

Within the context of the article, the quotes themselves aren’t too bad, although you can interpret Abrams’ latter quote where he says that The Last Jedi gave him the groundwork for “a story that I think needed a pendulum swing in one direction in order to swing in the other” as a way to let fans know that some kind of course-correction was happening. In recent interviews, Boyega has also been more open about his own dissatisfaction with parts of The Last Jedi (which he’s allowed to have).

But out of context, the screengrabbed quotes paint a narrative that all three of them are taking shots at The Last Jedi even as Johnson, who’s in the midst of promoting Knives Out, has had nothing but praise for Lucasfilm Star Wars (even amid the harassment he received). For some critics, it seems as though the cast and crew are reassuring the fans who objected to The Last Jedi (including the kinds of fans who bombarded Kelly Marie Tran with sexist and racist comments until she left social media) that the films would return to a narrower and more familiar view of what a Star Wars movie was.

Regardless of how you took it, the online infighting over The Last Jedi burst over as fans rehashed the film yet again, leading for it to start trending on Twitter. As far as what those arguments tackled, very few of the arguments were new since the internet has started fighting about this movie two years ago. Any nuanced criticisms people might actually have about The Last Jedi—which isn’t above criticism—have long been lost in the sheer volume of vitriol that comes with the types of fans who objected to things like seeing more characters who aren’t white men and political Star Wars films. (Spoiler: they’ve always been political.) And as Johnson recently noted when asked about the backlash he’s received over the film, the types of fans who harass him are a very small portion of Star Wars fans, despite how vocal they might be on Twitter whenever someone mentions The Last Jedi in a positive light.

On late Wednesday, Boyega ended up in even more hot water (on top of his comments to the New York Times and previous Last Jedi criticism) after Variety published an interview with him where it appeared as though he was calling Tran “weak” for how she dealt with online harassment directed toward her after being asked about Star Wars backlash; the question mentioned Tran by name. He has since clarified his comments, noting that “I was really speaking from my own perspective throughout this franchise” when addressing harassment from fans, and apologized for his comments.

In no way was I referring to Kelly when I made my comments although the interviewer mentioned her given the topic. I was really speaking from my own perspective throughout this franchise. Sometimes I’ve felt strong and sometimes I’ve felt weak. Badly worded though. I apologize.

Where does that leave us now? One, with a lot of mentally exhausted Star Wars fans whose potential excitement might be dissipating the more that we argue about a two-year-old movie. Some fans are worried that even the hint of criticism about Johnson’s film will mean that Abrams is planning to walk back everything that Johnson established in The Last Jedi, such as Rey’s parents. But mainly, we’re spending much more time rehashing a two-year-old movie than devouring every nugget we can about The Rise of Skywalker, a strategy that Disney and Lucasfilm likely didn’t plan when charting out how to promote the final Star Wars film.

We’re eight days out from the theatrical release of The Rise of Skywalker, which is aiming to answer big questions and wrap up a 42-year-franchise. Even without The Last Jedi divide that still exists today, there’s no way that a conclusion with that much on the line will satisfy everyone because well, Star Wars is one of the biggest franchises in the world and we have very different and often conflicting opinions about every single aspect of it; it’s the Game of Thrones season 8 conundrum on an even grander scale. But since that divide does exist, chances are very likely that it’ll only grow once we know how the Skywalker Saga ends. And when that happens, buckle up.