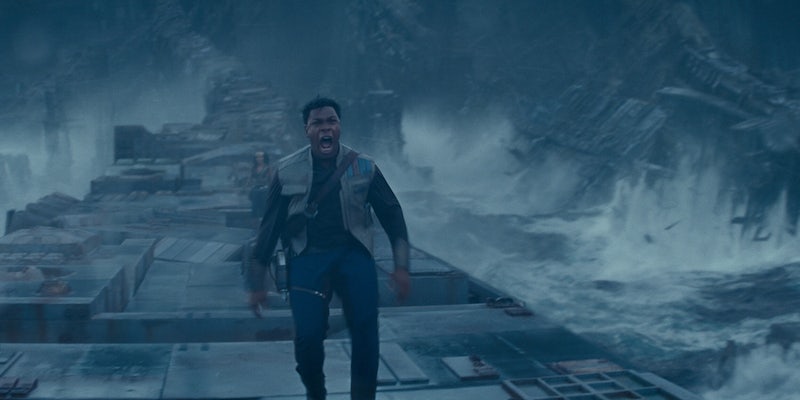 He put an end to the days-long mystery.

The cast and crew of Star Wars: The Rise of Skywalker have kept most of the details of the film close at hand for months, but all of that goodwill nearly went out the window after a major cast member left their script under their bed and it ended up on eBay. And the culprit has finally revealed himself.

We first learned about the near-slip earlier this week from director J.J. Abrams, who wouldn’t name the actor who lost their script but told Good Morning America that someone at Disney “got it back before it sold.” (Per Entertainment Weekly, the script would have belonged to one of the stars since supporting players like Keri Russell only received sides for their character.) On Tuesday, Daisy Ridley demured but offered a hint as to whose script almost leaked.

And on Wednesday, John Boyega put us out of our misery from potentially having a contrived, six-months-and-counting coffee cup-esque scandal by copping up to the major faux-pas on GMA.

“Alright, alright guys, it was me,” he said as Michael Strahan and the audience reacted to the revelation.

Boyega quickly goes into an explanation as to what happened and the circumstances that led to the script getting out of his hands and onto the pages of eBay: it was taken not from a hotel room, but his own apartment. And whoever put it up on eBay set the price for a much lower price than you’d expect something as valuable as the script for a highly anticipated film would go for.

“I was moving apartments, and I left the script under my bed,” Boyega said. “I was like, ‘You know what, I will leave it under my bed. When I wake up the next morning, I will take it and then move.’ But then my boys came over and we started partying a little bit. And then the script, it just stayed there. And then a few weeks after that, this cleaner comes in, finds this script and then puts it on eBay for like £65.”

And although the situation appeared to have worked itself out in the end, that doesn’t mean that Boyega didn’t escape it completely unscathed. He said that he received calls “from every official” after the script nearly got out and joked that even Mickey Mouse called him up asking what he did.