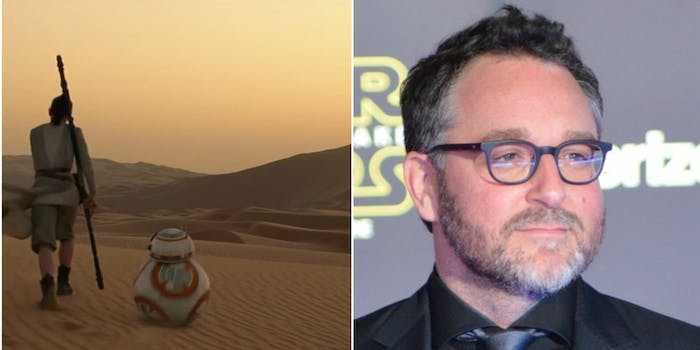 Lucasfilm has parted ways with director Colin Trevorrow, who was slated to helm Star Wars Episode IX. The studio made the announcement Tuesday afternoon in a brief statement posted to its Star Wars website.

“Lucasfilm and Colin Trevorrow have mutually chosen to part ways on Star Wars: Episode IX. Colin has been a wonderful collaborator throughout the development process but we have all come to the conclusion that our visions for the project differ. We wish Colin the best and will be sharing more information about the film soon.”

Lucasfilm has not yet announced a replacement for the film, which is scheduled to debut on May 24, 2019. The news comes just months after the studio split with directors Phil Lord and Chris Miller (The Lego Movie) on the Han Solo standalone film, replacing them with director Ron Howard (Apollo 13, A Beautiful Mind). Howard is now reportedly in extensive reshoots for the movie.

Trevorrow became a name in Hollywood in 2012 after directing Safety Not Guaranteed, for which he was nominated for an Independent Spirit Award for best feature film. He then made the significant leap to direct blockbuster Jurassic World and was soon after asked to direct Episode IX. While the details of Trevorrow’s exit remain unclear, fans don’t seem worried. If anything, some took the departure as reason to celebrate.

While Episode XI is certainly among the most prestigious films now up for grabs in Hollywood, pleasing fans and the Star Wars Story Group will be no small feat for whoever takes the reins.