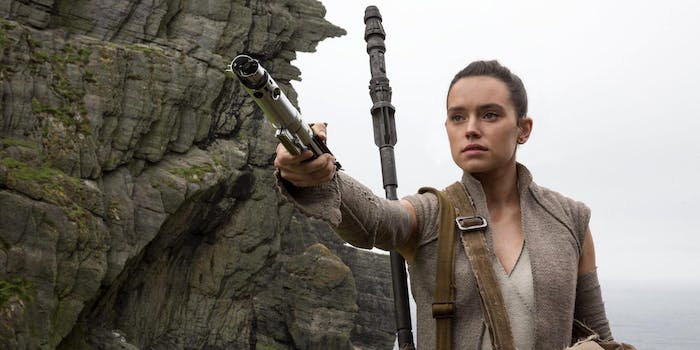 'The Last Jedi' laughs in the face of nostalga—but it has a healthy respect for history.

In the lead up to The Last Jedi, Star Wars fandom was obsessed with two questions: Who are Rey’s parents, and what’s up with Snoke? (Well, three questions if you include speculation about which characters would hook up.) To the irritation of many, Rian Johnson casually torpedoed the most popular theories. Snoke is dead, and Rey’s parents are anonymous randos.

Kylo Ren isn’t a wholly reliable source, so J.J. Abrams still has room to backtrack on Rey’s parentage in Episode IX. But if he does, he’ll undercut one of the most powerful themes of The Last Jedi: The past informs our lives, but it doesn’t dictate the future. Destiny is what we make it.

The Last Jedi has a healthy disrespect for nostalgia, hence why it’s so divisive among adult Star Wars fans. It recognizes the weight of familiar totems like Luke Skywalker’s lightsaber, but unlike Jurassic World or Ready Player One, it doesn’t treat them with breathless reverence. Reunited with his father’s iconic weapon, Luke tosses it over his shoulder and walks away. An appropriate torch-passing scene between J.J. Abrams’ lovingly derivative work in The Force Awakens, and Rian Johnson’s more rebellious vision. Abrams set up a mystery box for Rey’s backstory, and Johnson opened it to reveal nothing inside—a more invigorating answer than a predictable Skywalker twist.

Star Wars is a historical epic, structured around three generations (so far) of the Skywalker family. This idea of lived history is even stronger in the sequel trilogy because by this point we’ve actually seen what came before. Beginning with the image of Rey living in a ruined AT-AT on Jakku, we’re constantly reminded of the past—and how easily it’s forgotten. In the space of one generation, the Jedi went from having a galaxy-wide influence to being little more than a fairytale. Luke resurrects them but within Rey’s lifetime, the Jedi sink back into obscurity.

The Last Jedi begins with a face-off between two men who were born into this war: Poe Dameron, whose mother flew an A-Wing for the Rebel Alliance, and General Hux, the son of a Galactic Empire officer. Poe and Hux look up to the previous generation of leaders, just as the new generation of Star Wars creators grew up with George Lucas. Rian Johnson takes that history and explores its impact, tying into fandom’s view of how Star Wars “should” treat its own legacy.

It’s surprising to see how many viewers missed the point. With his Darth Vader memorabilia and his drive to selectively erase the past, Kylo Ren is a living critique of thoughtlessly rehashing what came before. So is the entire First Order, to be honest. They’re parasites who flourished in the decaying shell of the Empire, succeeding only because the infrastructure remained. Palpatine spent decades building the perfect war machine, while Snoke just fills the void left behind. Hux and Kylo Ren are portrayed as deeply flawed commanders, partly because they’re not trying to do anything new. The Supreme Leader is dead; long live the Supreme Leader.

The Resistance experiences its own generational struggle in The Last Jedi, to a more constructive end. Poe, Rose, and Finn’s storylines are all about learning from failure, a lesson Luke still struggles with after 35 years. Between Poe and his superior officers, we see a conflict where neither side is in the wrong. Leia wants Poe to understand the responsibility of leadership, but he can’t absorb the lesson until he’s experienced meaningful failure. Meanwhile, Poe is frustrated by Vice Admiral Holdo’s inaction, based on incomplete information because Leia and Holdo keep Crait’s existence a secret.

The standoff between Poe and Holdo represents the inevitable friction between people who fight for the same goal but take aim from different angles. There’s a noticeable subtext to the casting choices here, with people of color as the new generation of heroes, and white women as the old leaders of the Resistance. The Hillary Clintons—if that’s not too fraught an analogy. Faced with a life-or-death situation, Poe and Rose want to get shit done, ASAP. They take action while Holdo seemingly does nothing, following a plan based on classified military secrets. Poe ends the film with a more nuanced understanding of command, while still having the youthful zeal that Leia has lost. We assume he’ll lead the Resistance in the next film, with Finn and Rose as his lieutenants.

Finn and Rose’s subplot inspired a mixed response, with some fans complaining that it slowed down the action or “didn’t go anywhere.” That’s arguably true in terms of plot, since their story doesn’t end in the neatly heroic moment you might expect. But that doesn’t mean it’s unimportant. As many people have frustratedly pointed out, Finn and Rose’s journey encourages us to think about the moral background of the war. It also illustrates the struggle between personal choice and destiny, an ongoing theme in the franchise.

Newly free from the First Order, Finn is unsure of his role in the war. The amoral “DJ” (named after his motto, “Don’t Join”) represents the temptation of neutrality, cynically suggesting that the Resistance and First Order are equally dirty. He’s the catalyst for Finn’s origin story as a rebel, providing an example of what not to do. If The Force Awakens was about Finn running away from the First Order, The Last Jedi is about finding something to run toward.

In The Last Jedi‘s examination of history and legacy, the lead characters each embody a specific attitude to the past and future. Rey follows a classic fairytale arc of heroic destiny, Poe represents institutional memory, Finn reshapes his own future, and Kylo Ren invites downfall with his toxic obsession with the past. Their stories may not fulfill predictable expectations, but they’re consistent with the core themes of the Star Wars saga.

On top of his irreverent attitude to nostalgia, Johnson has no interest in fan theories. That’s what really got people’s goat in certain corners of Star Wars fandom, as Vox‘s Todd VanDerWerff explained in his coverage of Last Jedi backlash. Some fans took it as a personal insult when Johnson killed Snoke and obliterated their theories about Rey’s family, leading to a bunch of petitions demanding that the film be remade or deleted from canon. (They seem to think that Johnson broke into the Star Wars vault like some kind of deviant and filmed the entire movie while thumbing his nose at George Lucas. In reality, the Lucasfilm Story Group seems very happy with Johnson’s work, compared to Rogue One‘s reshoots or Han Solo‘s directors getting fired.)

Yoda’s cameo encapsulates The Last Jedi‘s divisive nature. It’s ostensibly an indulgent callback to old times, with Frank Oz reprising his role as Yoda’s puppeteer. Yet the whole point of the scene is to kick old canon to the curb and move on, with Yoda quipping about the ancient Jedi texts, “Page-turners, they were not.” Gleefully setting fire to the library, Yoda rejects the stodgy doctrine of the past—without being as anarchic as many fans seem to fear. Some of those Jedi books survive, after all. The important thing is that Luke and Rey learn their own lessons, and the idea of “Jedi” is free to evolve in later movies. If The Last Jedi told another story about a wise mentor teaching a youngster the same skills, what would be the point? We already saw the Jedi fail twice before.

In a similar vein to Rey’s family backstory, there are a ton of moments where The Last Jedi takes a weighty, symbolic object and says, “Hey, this doesn’t matter as much as you think.” Luke’s lightsaber, obviously. Poe’s beloved X-Wing, which gets blown up. Rose’s necklace, sacrificed despite its emotional importance. In the chaotic rush to escape the First Order, our heroes lose almost everything. The story encourages detachment from things that cannot or should not be saved. Material symbols are depicted as important but transitory. In fannish terms, it’s the opposite of buying a mint-condition action figure and keeping it in the packaging forever. But regardless of what some fans believe, Johnson didn’t throw their toys in the trash, either. The Star Wars franchise’s love of symbolism is still alive in the final scenes, with those kids telling Luke Skywalker stories on Canto Bight.

Luke spent the last years of his life trying to escape his image as a fairytale hero. In the end, he saves the Resistance by fulfilling that role one last time, but not before pissing off a bunch of fans who thought his milk-guzzling behavior was “out of character.” (That’s a debate for another day, but let’s put it this way: Thirty-five years is a long time between films.) Like Kylo Ren, Luke wanted to let the past die. He doesn’t get his wish, but it’s not an unhappy ending. Even though we know Luke became a trollish curmudgeon in his old age, his legacy survives as a mythic symbol, inspiring a new generation to join the fight.