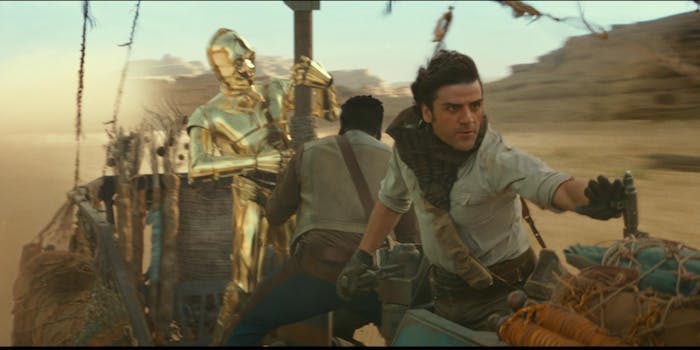 The Skywalker Saga is coming to an end.

We’re one month away from the theatrical release of Star Wars: The Rise of Skywalker, and there is still so much that we don’t know about the Skywalker Saga’s final installment. But director J.J. Abrams and the cast are revealing a few nuggets about where the film starts off and where it might go.

Much of what Entertainment Weekly’s cover story on The Rise of Skywalker tackles is familiar territory, such as the fact that there’s still more to explore about Rey’s origins in the final film and how Abrams is planning to use unused footage of Carrie Fisher from The Force Awakens to wrap up Leia Organa’s story. But in regards to the sequel trilogy’s main hero, Rey’s entire journey is going to come into play before the end.

“The scavenger who is desperate and haggling for portions and trying to survive [in Force Awakens]—those special skills and that special experience ends up being something that is essential to saving the galaxy,” Abrams explained.

As Daisy Ridley put it, Rey has developed more skills as a Jedi, but “she’s vulnerable and a little insecure” with it.

According to Abrams, the stakes of The Rise of Skywalker are “all or nothing,” and he planned for an ending that won’t directly lead into another Star Wars trilogy. Oscar Isaac teased a “very long chess match” between the Jedi and the Sith that could come to a head before the end.

But the cover story at least reveals just where we’ll start out: The Rise of Skywalker kicks off more than a year after The Last Jedi as the Resistance, once on the edge of defeat, is on the hunt for allies to aid them in their cause as Rey continues her training. One particular mission brings the sequel trilogy’s signature trio—Rey, Finn, and Poe—together for the first time. It also allows both Finn to be a “more capable soldier” and Poe to be more part of the group instead of just being in an X-wing cockpit.

But we also get a hint of just what Lando Calrissian might be up to after staying on the sidelines for most of the sequel trilogy—and it’s not just being able to see the Millennium Falcon’s first owner back in the pilot seat. (Although based on the film’s trailers, we’re certainly going to get that.) He’s got some unfinished business along the way.

“There are all of these things that have happened in Lando’s life that he’s got to resolve,” Billy Dee Williams said.

And then there’s C-3PO himself, who still has a big role to play in The Rise of Skywalker that isn’t just comic relief; according to Ridley, Rey and the droid might be spending a lot of time together in the film. But everything must come to an end, one that closes the door on a 42-year-old story.

Read the entire cover story over at Entertainment Weekly.