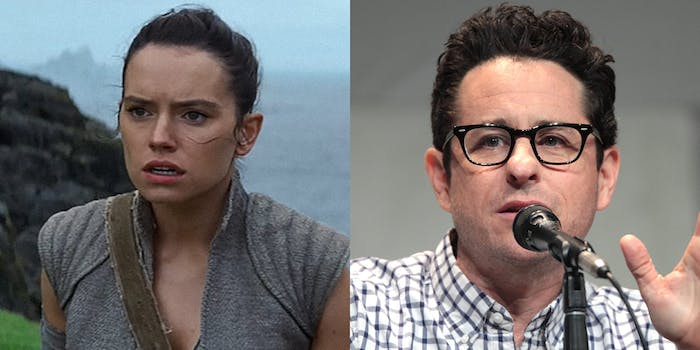 Some are disappointed a woman wasn't hired.

Abrams, who previously co-wrote and directed Star Wars: The Force Awakens, will write the script with Chris Terrio.

“With The Force Awakens, J.J. delivered everything we could have possibly hoped for, and I am so excited that he is coming back to close out this trilogy,” Lucasfilm President Kathleen Kennedy said in a statement.

His return to the Star Wars director’s chair comes a week after Lucasfilm parted ways with original Episode IX director Colin Trevorrow (Jurassic World). Although the statement released at the time said that Lucasfilm and Trevorrow had “mutually chosen to part ways,” reports soon surfaced that Trevorrow was “unmanageable” and “difficult.” Unlike Phil Lord and Chris Miller’s departure from the untitled Han Solo movie, this one occurred before any filming began.

Bringing Abrams back to direct Episode IX will likely disappoint many of those hoping that Lucasfilm would finally hire a woman to direct a Star Wars movie—even if those fans loved The Force Awakens. But it’s ultimately a safe choice. Lucasfilm has worked with Abrams before—and he appeared to have a positive enough experience that he was willing to return to the franchise—and he delivered results with The Force Awakens

Not only was it beloved by critics and fans alike enough that many chose to see it multiple times, it was a fully operational box office juggernaut. It still holds dozens of box office records and made nearly $2 billion during its historic run. It makes sense that Lucasfilm would would want to work with Abrams again.