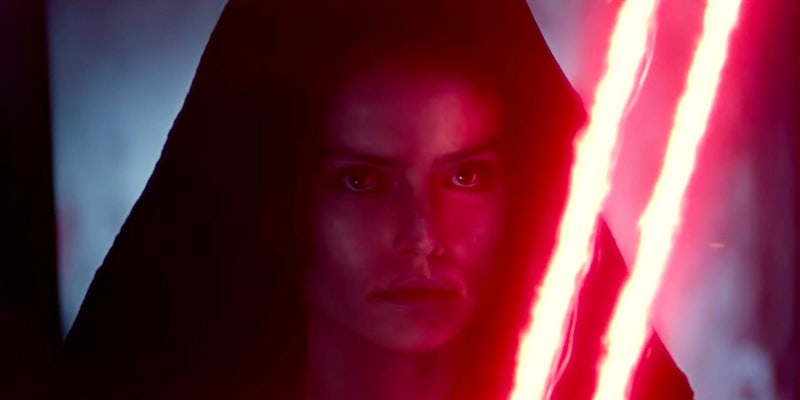 The top theories about ‘Dark Rey’

A new 'Rise of Skywalker' clip shows Rey in a black robe, wielding a double-bladed lightsaber. What does it mean?

After debuting to shock and excitement at the D23 Expo, on Saturday Lucasfilm released a sizzle reel for Star Wars: The Rise of Skywalker that is sparking more than just lightsabers.

The vast majority of the sizzle reel is something of a retrospective on the Skywalker Saga—Star Wars’ nine-film series that follow the Skywalker family—but it ends with even more footage for The Rise of Skywalker. Much of it touches on familiar elements, both from the sequel trilogy and what we’ve already seen from the film: Rey, Finn and Poe on the desert planet of Pasaana, the Resistance and First Order fleets meeting in the sky, and a lightsaber battle between Rey and Kylo Ren on what looks to be the wreckage of the second Death Star as they’re surrounded by choppy waters.

“Your journey nears its end,” the Emperor says.

The Rise of Skywalker Rey theories

But the biggest shock arrived at the end of the trailer. After Palpatine’s voiceover, we pivot to a shot of Rey. She’s hooded and donning black—the first time she’s done so in the sequel trilogy—with what looks like two red lightsabers. She punches her hand forward, which unlocks one of the blades so that it swings down to create a double-bladed lightsaber.

It’s a very different Rey than we’re used to seeing (although a couple of cosplayers were prepared for this turn of events). Rey, like any Star Wars hero, has been tempted by the dark side of the Force before, but so far, she’s always been firmly tied to the light side; at the end of The Last Jedi, Luke Skywalker tells Kylo that he will not be the last Jedi as the film cuts to Rey.

But does this mean trouble for our hero? It’s hard to say, given that Rey exists in a world filled with prophetic dreams, visions, a connection with Kylo that’s already been tampered with, the Emperor as a wild card, and the fact that Star Wars trailers can sometimes be misleading are all at play. For all we know, Rey might just want to wear black at some point in the movie. (Luke donned the color in Return of the Jedi!) But that doesn’t mean it’s all good, either.

The simplest explanation is one that exists on face value: Rey finally turned. Rey went full goth and, despite having forged her own blue lightsaber (or fixed Luke’s lightsaber after she and Kylo snapped it in The Last Jedi), she now has a new lightsaber—one that she’s probably more adept to wielding thanks to years of fighting with a quarterstaff on Jakku.

The biggest argument against that is also the simplest. If Dark Rey is happening outright with no twists or other reveals, it’s very unlikely that Disney would just reveal that in a sizzle reel.

We’ve seen that kind of trailer manipulation from the sequel trilogy before. The Force Awakens’ marketing showed Finn wielding Luke’s lightsaber to fight Kylo, and while he does just that, it completely hides the fact that Rey is the one who’s strong with the Force so that we get the big reveal at the end of the film.

And in The Last Jedi, a cut showed Rey asking for someone to show her place in all this before Kylo offered his hand, suggesting that Rey could turn. It turned out to be two scenes stitched together: Rey’s speaking to Luke in the first scene while the second takes place after the Throne Room fight after Kylo asks her to rule the galaxy with him. But the general gist of Kylo offering her hand to Rey is still there, a gesture that she refuses.

Before that moment, Rey summons Kylo’s lightsaber in Snoke’s throne room and stands ready to attack, a scene that made it look like she might’ve turned. But it ended up being a move of convenience since Snoke had her own lightsaber in his possession.

2) Rey does turn, but it’s temporary

The darkness within Rey has been a card on the table for ages, although this is our most explicit look at that yet. She has an aggressive fighting style, one that, both from an emotional and cinematic standpoint, is very similar to Anakin Skywalker. Even in the sizzle reel, we see Rey throw her lightsaber in anger or frustration in what looks to be a session with a training remote.

And Rey has been tempted before. In the Force Awakens novelization, she’s tempted by the dark side of the Force after defeating Kylo on Starkiller Base. She knows almost nothing about the Force about that point other than what Maz Kanata and Kylo have told her, but deep down, she recognizes it:

Kill him, a voice inside her head said. It was amorphous, unidentifiable, raw. Pure vengeful emotion. So easy, she told herself. So quick.

She recoiled from it. From the dark side.

She’s also drawn to the cave on Ahch-To, a part of the island that’s strong with the dark side of the Force. When she first sees it during a lesson with Luke, he’s appalled that Rey didn’t stop herself from going toward it. Later on, she enters the cave on her own to find answers, and while there’s a certain amount of trickery at work with the mirrors, the cave itself doesn’t seem inherently evil.

But as Luke revealed to Rey in The Last Jedi, the temptations the dark side of the Force offers aren’t a one-time thing. He fought those during the original trilogy, but he was also tempted to kill his own nephew after seeing darkness and the hold that Snoke already had over him. So even though Rey’s already turned down that temptation multiple times, it’s going to offer itself to her again and again.

We don’t have enough information on what might lead Rey to take that path, but she could see for herself that it might not be the answer—and either pull herself back or be brought back to the light by Kylo or someone like Finn or Poe before the end. Darth Vader, most famously, redeemed himself before the end by putting himself between Luke and the Emperor’s lightning attack to save his son’s life. It’d be an evolving message on the Force and a way to show that even if you do stray down a dark path, all hope isn’t lost.

Besides, only the Sith deal in absolutes.

We’ve seen our Force-sensitive heroes and villains alike grabble with visions from the Force. Anakin has a nightmare about Padmé’s death, which ultimately leads to him succumbing to the dark side of the Force. On Dagobah, Luke encounters Darth Vader, kills him, and sees his own face appear in Darth Vader’s mask. Rey has her own series of visions after touching Luke’s lightsaber for the first time, which ends with a glimpse of her fight with Kylo. And when Rey and Kylo touch hands in The Last Jedi, they’re both shown a future where they turn; Kylo’s comes to fruition soon after when he kills Snoke instead of executing Rey.

We have little context, so if it is a dream or a vision, we have no idea whose dream or vision it is. It could be Rey having a nightmare about what she could become, or Kylo—who’s spent the trilogy resisting a call to the light—having a dream or nightmare about the Rey who might join him one day. If Palpatine is involved, he could be torturing one of them (or both of them) with this vision. It might even be what Kylo saw in his vision of Rey turning in The Last Jedi.

There’s something unworldly about this Rey—aside from the black garb and red lightsaber blades—so we don’t even know if this version of Rey is actually meant to be her; it could be a projection of some kind. At this point, we can’t rule anything out.

(For what it’s worth, the official Star Wars website initially referred to the Dark Rey scene at the end as a “vision of a Rey with a reticulated red blade” before changing the wording to “sight of Rey.”)

4) Rey is possessed or controlled by Emperor Palpatine

Whether it’s through her Force connection with Kylo, a perceived moment of weakness in the movie, or even encountering a lightsaber discovered in the wreckage of the second Death Star, it’s possible Rey might be susceptible to a takeover.

Granted, we don’t know how Palpatine will play into The Rise of Skywalker; the last we saw him in Return of the Jedi, he fell to his death in the second Death Star before it was destroyed. He could physically appear, be a voice heard by Rey or Kylo, be visible in flashbacks, or even make an appearance in the World between worlds—a mysterious realm explored in the final season of Star Wars Rebels—or a Dark Holocron if TV canon is in play. The lightsaber Rey holds in the final scene (the design of which previously showed up in Rebels) could even be Palpatine’s if he obtained a new one after Revenge of the Sith; we don’t see him use one at all in Return of the Jedi. But since he’s dead, Palpatine might need a vessel to orchestrate his last plan.

A Dark Rey might be everything Kylo wanted in theory, but perhaps not presented like this. And if that’s the case, Kylo will then be presented with an opportunity to not only save Rey but to also save himself from the darkness.

And if there is one story that Star Wars loves telling over and over, it’s one of redemption.

The theory that Rey is a clone has existed long before the sizzle reel dropped, ranging from Rey being made from Luke’s severed hand in Cloud City to Rey being a clone of Kylo himself or she’s a clone of Knights of Ren.

But stranger things have happened in Star Wars, right?