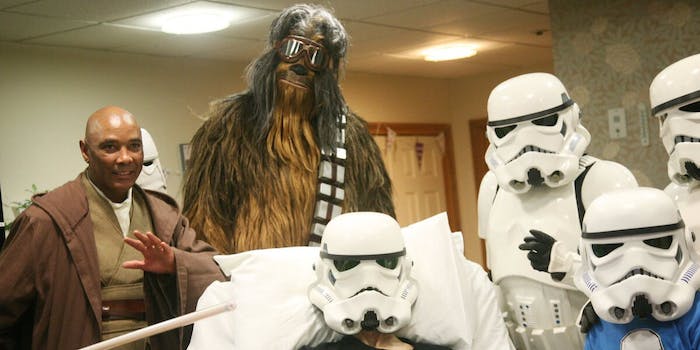 The patient did not think he would make it to the film's December release date.

A British man with a terminal illness got the chance to see Star Wars: The Rise of Skywalker early, thanks to Disney.

Disney CEO Robert Iger confirmed the news in a tweet on Thursday.

“On this Thanksgiving, we at Disney are grateful to be able to share #TheRiseOfSkywalker with a patient and his family @RowansHospice,” Iger wrote. “May the force be with you and with us all!”

On this Thanksgiving, we at @Disney are grateful to be able to share #TheRiseOfSkywalker with a patient and his family @RowansHospice. May the force be with you and with us all!

The patient, who wished to remain unidentified, enjoyed the film with his family at Rowans Hospice in Hampshire, England. The hospice provides “free care and support” to those with a “life-limiting illness,” according to its website. The hospice expressed its gratitude to Disney in a tweet of its own.

“This morning, a very nice man named Jonathan from Disney turned up at our Hospice with a laptop that had a very important movie on it,” the hospice’s Twitter account wrote.

In an official statement attached to the tweet, the hospice expanded on the sentiment.

“We want to let everyone know that Disney has created a truly magical moment for our patient and his family today by allowing them to watch Star Wars: The Rise of Skywalker before the official release date,” the statement reads. “The patient is a huge Star Wars fan whose final wish was to be able to see the last Star Wars movie together with his son. The patient did not think he would make it to the film’s official release date in December so Disney agreed to let him watch the film with his family on Friday morning.”

This morning, a very nice man named Jonathan from Disney turned up at our Hospice with a laptop that had a very important movie on it. Our amazing patient has now seen #StarWars #RiseofSkywalker with his son 💚

According to Rowans Hospice Chief Executive Ruth White, the story began when an employee noted a Star Wars tattoo on the patient’s leg. A tireless social media campaign by the hospice managed to catch the attention of the people at Disney. Thanks to its work, the patient got to enjoy the film not only with two of his sons but also with his wife and two brothers, according to NBC News. The entire group signed a non-disclosure agreement (NDA) before viewing the film.

You're our only hope https://t.co/IBA8OcXFz0

Magician Sean Boon tweeted out a picture of the group enjoying Rise of Skywalker. They wore full Star Wars cosplay to protect their identities. “I’m the tall handsome Stormtrooper in the pic,” he wrote.

Several Star Wars cast members expressed their delight at the news. Both Mark Hamill, who plays Luke Skywalker in the Star Wars franchise, and Warwick Davis, who portrayed Wicket the Ewok in Return of the Jedi, tweeted out their support.

“Many thanks to @RobertIger & everyone at @Disney for making this happen,” Hamill wrote. “Hope the Rowan Hospice patient not only enjoyed the film, but gets an extra-special satisfaction in knowing he saw it before I did.”

Davis echoed the sentiment in a tweet of his own. “This is wonderful and sad in equal measure. I’m so pleased @Disney we’re (sic) able to use some #Disney magic to make this happen for the patient,” he wrote.

The hospice responded to both tweets, inserting a coy Star Wars nod in its response to Davis. “Thank you, Warwick,” the hospice wrote. “The patient and his family are completely over the moon of Endor about it all. It’s created some absolutely unforgettable memories.”

Has this week actually happened? If it's a dream, please don't wake us up 💚#RiseofSkywalker #StarWars #WeAretheSpark https://t.co/qLHN3OHPxz

Thank you, Warwick. The patient and his family are completely over the moon of Endor about it all. It's created some absolutely unforgettable memories #RiseofSkywalker #StarWars

Thanks to the power of social media, the patient and his family got to share a uniquely special experience. The hospice thanked those who helped its campaign reach the people at Disney in a statement.

“The response from everyone, including the Star Wars community, has been absolutely phenomenal over the last few days,” representatives of the hospice said. “So a massive thank you to every single person that has shared our post and given their time to help make this possible.”