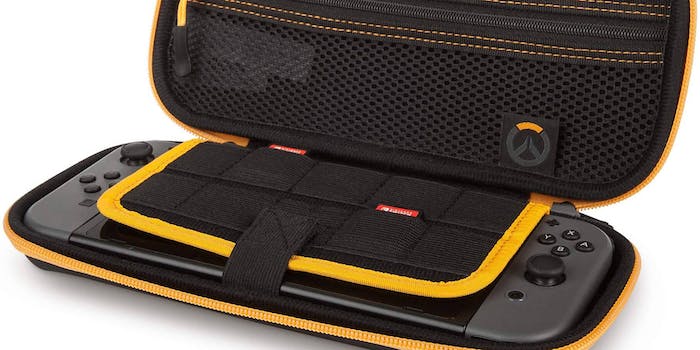 What is Nintendo brewing?

An official Overwatch-branded carrying case for the Nintendo Switch gaming console was posted to Amazon—and very quickly delisted—Monday evening. The product’s delisting has many speculating what future announcements this could foreshadow.

“Officially Licensed by Nintendo and Blizzard Entertainment,” read the page for the case while it was online.

“I’m loving the Switch,” said Overwatch Director Jeff Kaplan in 2017 via a Reddit AMA. “Getting [Overwatch] on the Switch is very challenging for us. But we’re always open minded about exploring possible platforms.” Additionally, in 2018, Blizzard ported the Diablo 3 Eternal Collection to the Switch so an Overwatch port is certainly a possibility.

However, another theory has surfaced on Twitter. Recently, a post on 4chan’s gaming board has been co-opted as a sort of Twitter meme in conjunction with speculation that a Nintendo Direct, the periodic live stream where Nintendo makes announcements, is forthcoming. The post claims that on Sept. 12, Nintendo will announce the fourth DLC character for Super Smash Bros. Ultimate. The post also claims that the character will be female and “not a demanded character and will disappoint and confuse a lot of people”

Tracer in Smash? Don’t worry, Mama will fix it! pic.twitter.com/ObS3KAewCw

This vague post and the case’s delisting has led some to believe that Tracer, one of Overwatch’s original heroes, is set to be announced as the new DLC for Smash Ultimate.

Since there's a chance Tracer would be in Smash Bros, I made this just in case if the rumors were true. pic.twitter.com/wdHBdHzAbF

The internet’s gonna go out of control if it’s really Tracer. https://t.co/MzpgmAR0t9

Twitter users’ lukewarm reception to the idea of Tracer’s Smash Bros. debut does seem to prove the 4chan post somewhat correct—though there’s no word yet on whether the delisting is connected to these rumors.