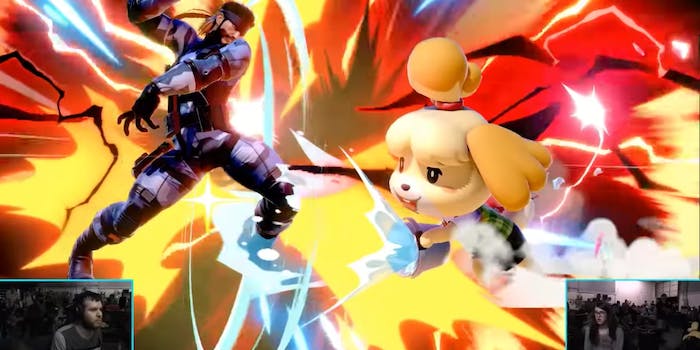 The internet has found a new “milkshake duck” through 15-year-old professional Super Smash Bros. Ultimate player and Twitch streamer Bocchi. In screenshots that were uncovered recently, Bocchi and others were caught repeatedly using the N-word in a private Discord server.

Bocchi has now completed the 100% speedrun of being a pro smash player. Here’s how her run went:
1. Get win on top player
2. Have said top player get in drama and get good points
3. Gain follows
4. Join an org
5. Get dropped by an org
6. Be racist and get canceled
7. Deactivate

In addition to her age, Bocchi stands out for using the character Isabelle–a traditionally low-tier pick–and the results she has been able to achieve while playing the unconventional character. Bocchi first made a name for herself in the Ultimate community in June by beating top player Elliot Bastien “Ally” Carroza-Oyarce at a weekly tournament in Long Island, New York. The video of her set with Ally currently has nearly half a million views. In the recording, Bocchi is seen celebrating as the crowd joins in on the bewilderment she’s experiencing from beating a seasoned player, all while using Isabelle.

This celebration would be rather short-lived as much of the attention Bocchi received afterward was not positive. After her victory, Bocchi stated that rampant harassment accompanied her newfound fame within the Ultimate scene. Eventually, Bocchi was forced to temporarily deactivate her Twitter account and take a step back from competing. Bocchi said sexist comments and outright bullying she was receiving affected her mentality.

“Fame has brought nothing but stress and annoying. there are nice people but a lot of negativity came from it too,” she wrote in June.

was looking through ANTi’s tweet about me winning the set and saw two replies about “ally lost to a girl wtffff lmao” and “women shouldn’t be playing games.”

fame sucks. i literally would have rather lost that set and have done nothing. fame has brought nothing but stress and annoying. there are nice people but a lot of negativity came from it too. sigh.

It was later discovered that Bocchi’s opponent in the set that sprung her to fame, Ally, had a dark secret. Through statements on Twitter shared in early July, Ally confessed to the allegation that he previously dated fellow pro player Zack “CaptainZack” Lauth while Lauth was 16 and he was around 27.  After admitting to the allegations, Ally released a statement saying that he was retiring from the Ultimate competitive scene.

Ally confirms the allegations proposed by Tamim were true, retires from Smash from smashbros

In light of Ally’s retirement and Bocchi’s social media return, an arm of goodwill was extended to Bocchi by Ultimate community members who had witnessed or even possibly participated in bullying that drove her off of Twitter. This too was short-lived. Mere hours after Bocchi returned to Twitter, screenshots detailing her use of the N-word as well as jokes about lynching came to light in conversations in a private Discord server. The conversations also included fellow up-and-coming player Guillermo “Stroder” Martinez Jr.

Since then, Bocchi apologized for her comments via Twitter but has also slightly backpedaled by calling herself a “dumb, edgy, and self-centered person” at the time and writing her comments off as  “poorly done shock humor.”

“All of those comments in those screencaps were in a satirical sense and I have no hatred towards people of color,” Bocchi wrote.

it truly was to be saying such things. i deeply apologize and am doing my best to move forward. i will do my best to not let the past or what people say dictate my future. once again, im extremely sorry and any opinions you have on me are completely valid. thanks for reading.