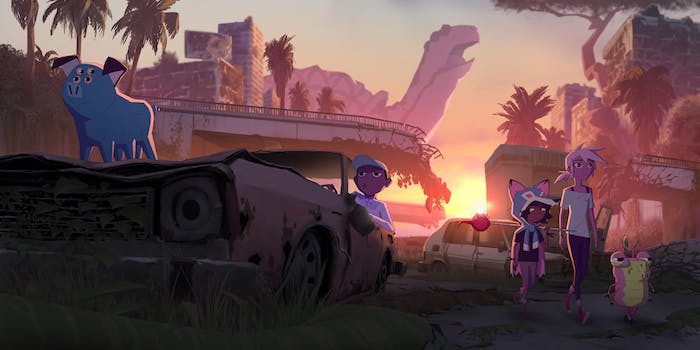 The new Netflix show, from DreamWorks, is compelling and hopeful.

There are precedents for animated children’s shows set in post-apocalyptic worlds, but none are quite like DreamWorks’ new Netflix original show, Kipo and the Age of Wonderbeasts. Past examples like Wall-E explore what happens when the apocalypse means Earth is abandoned, but Kipo and the Age of Wonderbeasts looks at the post-apocalypse where we’re still on Earth. One major difference: humans are no longer on top of the food chain. Intelligent and huge animals (called “Mutes”) now roam above-ground among humankind’s vegetation-covered decaying infrastructure.

Kipo and the Age of Wonderbeasts

Most humans have taken refuge in underground bunkers, and Kipo, our protagonist, is a “bunker person.” The story begins with her mistakenly washed up above ground with no easy way to return home. She sets off on a quest to find her dad and people, and on the way, forms a friend group and gets to know a lot of Mutes. Refreshingly, Kipo and the human members of her ragtag group are all Black kids. (Kipo, to be entirely accurate, is half Black and half Asian.) I mean, how many times have you seen that in a kid’s show, and for that matter, where said characters’ storylines don’t revolve around their race? Certainly, a place exists for stories that deal with the complicated stuff specifically related to one’s race, but it’s so refreshing to see stories where POC can just frolic and embark on imaginative adventures like other fantasy protagonists.

And boy does Kipo frolic excitedly in the above ground. She squeals over a cute Mute pig with four eyes (who becomes part of the main crew.) She chatters excitedly to Wolf, who is the first human she meets above ground. Shortly, happy-go-lucky Benson and his pal, a molting insect Mute named Dave, join Kipo’s journey, and she doesn’t bat an eye. In contrast to the relative caution the Mutes and above-ground humans have, Kipo’s comparatively fearless. The emotion of fear and how people deal with it is a central theme in the show for not only Kipo, but everybody. In the face of danger, multiple unknown factors, and the real possibility of death, it’s not unusual to be cautious and take the safest options. Many characters do grapple with that instinct, including most of Kipo’s main friend group. Kipo, on the other hand, takes a literal wrecking ball to above-ground norms, because, well, she doesn’t know what they are. She chooses to talk to and get to know the extremely cute but loud Timber Cats and the very cool, rock n’ roll snakes. Rather than Wolf—who thinks being self-reliant is the best path—Kipo is genuinely curious and wants to get to know each Mute tribe she encounters.

If cooperative teamwork had a poster child, Kipo would be it. After all, to overcome the odds in a world where a lot of things can and will eat you, developing relationships and working together is paramount. The main cast, with their unique personalities and who undergo the bulk of trials and tribulations together, provide ample opportunities for interesting relationships and friendships. The show fulfills some of that potential: it does a wonderful job fleshing out Kipo’s relationship with her best friend, Wolf. But in regards to the rest of the main cast’s dynamics, over the course of 10 episodes, they don’t quite get the development that keeps an audience really invested in their continuing journey as a unit. Occasionally, when an opportunity to delve further into a character’s mental conflict or internal struggle is presented, it feels hand-waved over.

It’s not that the creators aren’t capable of exploring depths and long-term character development. In fact, a side character’s emotional evolution surprised me the most. Jamal, a suit-wearing frog Mute, starts off as the typical villain and struggles to cope with the changes in his life. Sure, his storyline as an enemy-turned-[redacted because of spoilers] isn’t a wholly new trope, but who he is and what motivates him is particularly well depicted. And again, Kipo and Wolf’s relationship offers an impressively compelling take on what two young women growing together looks like. While other cast members don’t receive the full potential of development, a female friendship getting the bulk of the show’s emotional investment does feel particularly satisfying and delightful!

I do suspect this first season lays the groundwork for world-building and if Kipo and the Age of Wonderbeasts returns for a second season, we’ll see more exploration of how the relationships in Kipo’s friend group evolves. A special mention must be made of the excellent soundtrack by music supervisor Kier Lehman (Spider-Man: Into the Spider-Verse, Insecure). The songs really aided in fleshing out high-paced action scenes and in giving each Mute tribe their differentiating characteristics. Oh yeah, and the rock legend, the one and only Joan Jett, voices one of the rocker snakes, Camille. Kipo is worth watching just for that cameo.

Even with man-eating Mutes, Kipo and the Age of Wonderbeasts makes the post-apocalyptic world seem fun. I mean, dire yes, but wondrous and still full of hope. There’s new rules and new hierarchies, but Kipo shows that those are always meant to be broken in whatever world we’re in. Fear can be overcome, connections can always be made, with other humans and with extremely cute and unpredictable anthropomorphic lifeforms!