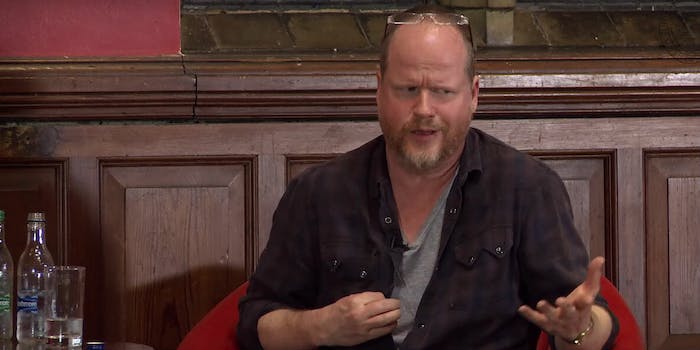 'I think they’re not looking at the big picture.'

Feminist corners of geek culture have long had a complicated relationship with writer and director Joss Whedon. Yes, he’s the guy who brought us our beloved Buffy the Vampire Slayer and insisted on Black Widow getting a decent role in the original Avengers. But he also wrote an infamously sexist script for a Wonder Woman movie—and his recent comments on the topic aren’t making it better.

While on the red carpet for the premiere of Avengers: Infinity War, Whedon decided to dish to Variety about his failed attempt at a Batgirl script and wondered aloud why people didn’t like his vision for Wonder Woman.

“I don’t know which parts people didn’t like, but… I think it’s great,” he told Variety, explaining that he revisited the script after a leaked copy got pilloried on the internet in June. “People say that it’s not woke enough. I think they’re not looking at the big picture.”

Whedon immediately walked that position back a smidge, adding that he wasn’t “the most woke individual who ever lived at that time.” But he still stands by the work.

Critics of the script took issue with Wonder Woman’s portrayal. The Daily Dot’s Gavia Baker-Whitelaw wrote at the time, “Rather than focusing on Diana’s strength and compassion, she’s portrayed as an arrogant yet clueless warrior, perpetually disrespected by every man in the film. One scene takes place in a nightclub where Diana confronts the villain Bacchus by—how else?—doing a sexy dance until he notices. The whole thing takes place from a leering male perspective, concluding with men fighting over her on the dancefloor.”

The leaked script was enough for fans to worry about Whedon’s work on a Batgirl movie for Warner Bros.—but the project never came to fruition. Whedon announced in February that he’d be stepping away from Batgirl, saying at the time “it took me months to realize I really didn’t have a story.”

“A lot happened in that year, and I felt some of the elements might not work as well,” he said. “The story sort of crumbled in my hands. There were elements that I just hadn’t mastered.”

Earlier this month, Warner Bros. announced that it had tapped Christina Hodson (Unforgettable) to work on the Batgirl script instead.