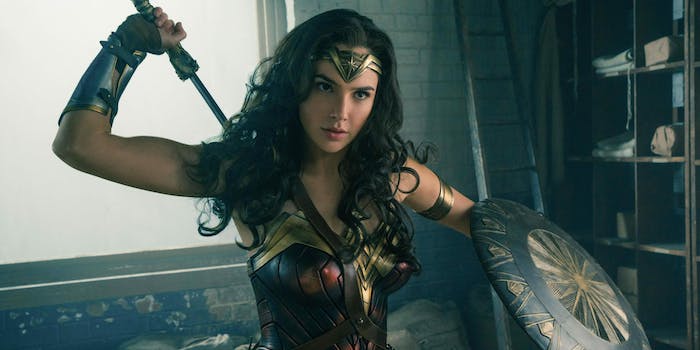 Wonder Woman is more of a manifesto than an origin story. It sets out the character’s ethos more clearly than recent DC movies did for Batman or Superman, reintroducing Diana of Themyscira (Gal Gadot) as a warrior who fights for peace, with a thirst for adventure and a boundless supply of compassion.

Set during World War 1, Wonder Woman follows Diana’s first foray into the human world, after growing up in the all-female paradise island of Themyscira. Raised by fearsome Amazon leaders like her mother Queen Hippolyta (Connie Nielsen) and aunt General Antiope (a supremely badass Robin Wright), she learns to be decisive and optimistic and a uniquely powerful fighter. She also has no experience of death, sexism, or the horrors of war.

When British-American spy Steve Trevor (Chris Pine) crash-lands his plane in Themyscira, everything goes to hell. The Amazons see their first brush with war in thousands of years, and despite their strict policy of non-intervention, Diana decides she must leave and help Steve end WWI. In her eyes, this means locating and killing Ares, the god of war, whom she believes has bewitched mankind into self-destruction. To Steve, it means delivering some documents about a secret German weapon to the British government, saving millions of lives but endangering the fragile armistice.

For such an iconic character, Wonder Woman’s role is less well known than Batman or Superman’s brand of heroism. This film sets out that role from the ground up, characterizing her as someone who will kill for a good cause, but can still find joy and love in the tiniest things, like seeing a baby in the street, or hearing a traumatized veteran learn to sing again. It’s a stark contrast with the grim tone of Man of Steel and Batman v Superman, despite the violence of Wonder Woman’s historical setting.

Instead of dwelling on the other Justice League movies, it’s more accurate to compare Wonder Woman with Marvel‘s Captain America and Thor. Diana combines the fish-out-of-water comedy of Thor (who has a similar fantasy backstory) with Cap’s role as a wartime hero, leading a small team across enemy lines. She shines through the cynicism of her surroundings, almost messianic if not for the down-to-earth humor of her awkwardness in human society. (Several scenes highlight Diana’s bafflement at human gender roles, poking fun at sexism without getting too heavy-handed.)

Writer Allan Heinberg transferred Diana and Steve’s comic book origins from WWII to WWI, which turned out to be an inspired choice. Hollywood is already up to the neck in Nazi-killing adventures, and the first World War is a better fit for Diana’s philosophy as a hero. The story still uses stereotypically evil German officers (Danny Huston) and scientists (Elena Manaya) as villains, but the overall message is straightforwardly anti-war. There is no “good” side in this pointless and brutal conflict.

Like Diana herself, the war represents a transition between the ancient and modern worlds. WWI was a clash between monarchic empires, but it’s also where mechanized weaponry became a deciding force. After seeing the athletic horseback techniques of the Amazon warriors, it’s hard to disagree with Diana’s belief that machine guns and bombs are dishonorable weapons. Soldiers die in the trenches for no moral or idealogical reason, whereas Diana only fights to achieve a heroic goal. It’s also a much more international conflict than we’re used to seeing in Hollywood cinema, showing soldiers from across the British and Ottoman Empires, and only one American character in the form of Steve Trevor.

Chris Pine is thoroughly charming as Steve, a character who could easily have been obnoxious. He’s confused but impressed by Diana and the Amazons’ lifestyle; supportive without seeming like an anachronistic example of modern feminism.

It’s refreshing to see a man play the love interest in an action movie, giving heartfelt speeches while his eyes glimmer with tears, and gazing in awe as Diana saves him from a hail of bullets. Anyone who finds this emasculating can go flush their head down a toilet, because Wonder Woman arguably treats its love interest with more respect than most superhero franchises. Steve is a fully-developed character with his enemies and allies (a rarity among his female counterparts), and his romance with Diana is more effective as a result. Rather than being a roided-up carnage machine like DC’s usual male leads, he’s like a sweeter version of Rogue One‘s Cassian Andor: a spy who survives by violence and deception, rediscovering his sense of hope by following an outsider hero.

Just to get real for a moment, I cried a lot during Wonder Woman. I cried when young Diana rode across a meadow on a horse, happy and free in her Amazonian paradise. I cried when Steve and his comrades used a piece of debris to catapult Diana into battle, symbolically respecting and supporting her power. I cried when Diana saw snow for the first time, and I suspect a lot of other women will cry for similarly minuscule reasons throughout this movie, because it’s so rare to see a female hero be so unabashedly emotional and nuanced and lovable. In my excitement at seeing the Amazons in battle, I even forgot my qualms about their weirdly skimpy armor. When you see them in motion, it doesn’t actually matter that the Amazons’ leather armor totally expose their legs to bullets and blades. They look effortlessly cool, and Lindy Hemming’s costume design is essential to the to the sun-drenched fantasy atmosphere of Themiscyra.

Director Patty Jenkins filmed Themyscira as a fantasy realm in a similar vein to Xena: Warrior Princess, depicting the Amazons as strong and beautiful without sexualizing them from a male perspective. (And despite Gal Gadot saying that Diana’s bisexuality is “not explored” in the film, there’s a strong implication that the Amazons are as gay as you want them to be—including a comment about them not needing men for sexual pleasure.)

While the WWI scenes are often Snyder-esque in their CGI explosions and murky color palette, Themyscira gives us two instantly memorable action visuals: Diana’s glowing whip and the Amazons’ fighting style, blending horseback tricks with airborn stunts. In a world of indistinguishable action movies by non-action directors, Patty Jenkins stands out with this wholly original style of fantasy choreography. Plus, it’s deeply satisfying to watch Robin Wright leap off a horse and wreck three dudes at once with a bow and arrow.

With a rather boring villain and a predominantly white main cast, Wonder Woman suffers some of the pitfalls you see in other superhero blockbusters. The final battle feels obligatory, and the brief Justice League tie-ins are awkwardly tacked-on to the main story. But the film’s strengths far outweigh its flaws, combining moral and emotional authenticity with superhuman stunts and a lively sense of fun: everything you want from a PG-13 superhero movie. It also feels undeniably fresh, which is more than you can say for 2017’s glut of unwanted sequels and reboots.