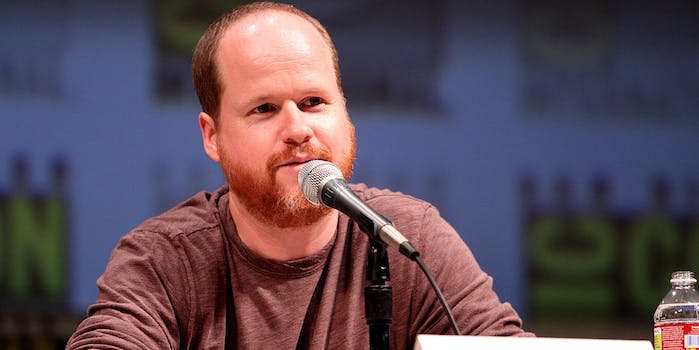 This week, Digital Spy published an interview with Joss Whedon in which he described the film industry as suffering from “genuine, recalcitrant, intractable sexism.”

Well, yes. Hollywood is sexist, and so are superhero movies, as Whedon went on to point out. “Marvel is in a position of making a statement simply by making [a female-led] movie, which I think would be a good thing to do. But it has to be a good movie, it has to be a good character, and most of the best characters in Marvel are owned by Fox, let’s face it!”

Although the interview was published this week, it actually took place months ago, on the set of Avengers: Age of Ultron. This was well before Marvel had announced Captain Marvel, its first female-led movie. Whedon’s remarks went viral as proof of his status as a feminist filmmaker, although on Thursday he admitted to BuzzFeed, “I sounded very harsh.”

Speaking with BuzzFeed, he clarified that he was more optimistic in the light of the Captain Marvel movie, which he thinks may have been spurred on by the success of Guardians of the Galaxy. “Well, let’s put it this way,” he said. “If a raccoon can carry a movie, then they believe maybe even a woman can.” He went on to highlight Lucy and The Hunger Games as proof that female-led action films can succeed at the box office.

Fans have been criticizing the sexism of comic book movies for years, if not decades. However, Joss Whedon is the highest-profile example of someone who makes this kind of comment while working in the superhero movie industry itself. As such, he’s often praised for being a bastion of feminism, which is honestly kind of sad.

Buffy the Vampire Slayer was groundbreaking, but its heyday was in the late ’90s. If you look at what Whedon is working on at the moment, it’s virtually indistinguishable from the movies he’s criticizing. Isn’t it a little embarrassing for the director of The Avengers to complain about the lack of representation for women in the superhero genre? We’re talking about a film where men outnumber women at least five to one, and where the only female characters were young, beautiful, and white.

Whedon may have given Black Widow and Maria Hill decent roles in Avengers, but the movie still failed the Bechdel Test, while making time for crowds of male footsoldiers and sidekicks. As for Age of Ultron, some fans are already concerned that Scarlet Witch is destined to become yet another of Whedon’s troubled-but-dangerous waifs, a staple of all his creative endeavors to date.

To a certain extent, the male-dominated nature of The Avengers can be blamed on studio interference. At the time, Whedon said that he only managed to get a female character on the team only after he told Marvel the Helicarrier would “feel like a gay cruise” with all those dudes on board. Still, it seems a tad hypocritical for him to strike out against the genre as a whole.

Instead of praising Joss Whedon for the millionth time, it may be a better idea to focus on women in the industry, such as comic book creators Kelly Sue DeConnick and Gail Simone, or the female showrunners of Marvel’s Agent Carter and A.K.A. Jessica Jones. If fans continue to hold up Joss Whedon as the voice of authority for feminism and diversity in superhero entertainment, then we’re not setting a very high standard for ourselves.