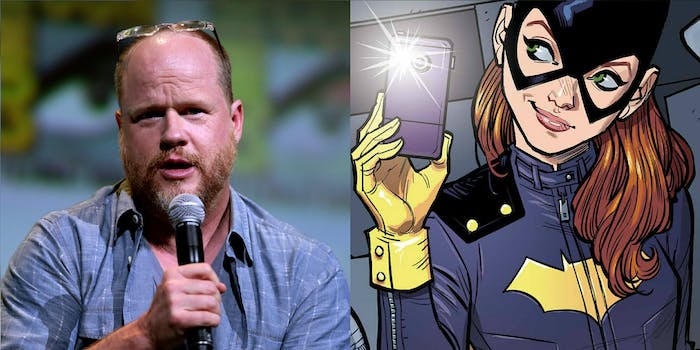 Joss Whedon is stepping down from the ‘Batgirl’ movie

He exits less than a year after his involvement was first announced.

Joss Whedon has exited the Batgirl movie less than a year after he was first confirmed to write and direct the project.

Whedon, who has previously directed the first two Avengers films and Justice League and created TV cult favorites like Buffy the Vampire Slayer and Firefly, admitted to the Hollywood Reporter that while he was initially thrilled to be part of the project he simply didn’t have any ideas for the movie.

“Batgirl is such an exciting project, and Warners/DC such collaborative and supportive partners, that it took me months to realize I really didn’t have a story,” Whedon said in a statement. “I’m grateful to [DC president] Geoff [Johns] and [Warners Picture Group president] Toby [Emmerich] and everyone who was so welcoming when I arrived, and so understanding when I… uh, is there a sexier word for ‘failed’?”

According to the Hollywood Reporter, Whedon likely would have also faced greater criticism as a man writing a movie about a prominent female hero, with its sources comparing it to if a white director had taken on Black Panther.

Whedon’s Batgirl, had it been made, likely would have been met with scrutiny from fans for a variety of reasons. Some fans wished that Warner Bros. had given the project to a female director—and some are now calling for women writers and directors to work on a Batgirl movie. Since his appointment back in March, Whedon’s sexist Wonder Woman screenplay leaked, leading many to worry what he would do to Batgirl. And while some have touted Whedon’s status as a feminist, an essay from Whedon’s ex-wife that revealed how Whedon reportedly abused his power as a producer while working on the set of his television shows shattered that for some fans.

It’s unclear what the status of Batgirl is now that Whedon is no longer involved.