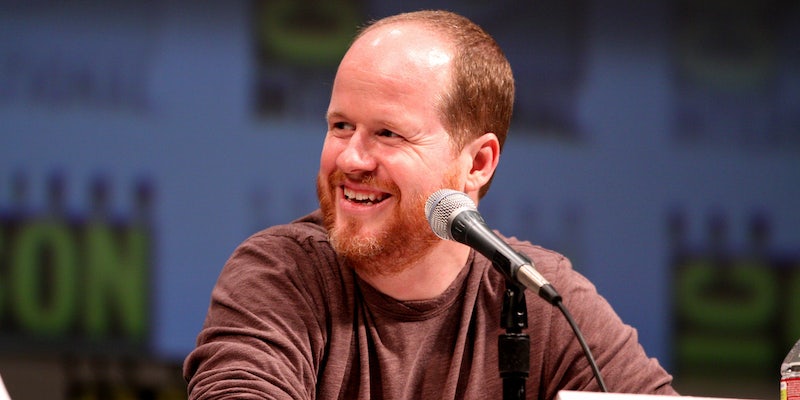 We really dodged a bullet when Hollywood rejected this screenplay.

Joss Whedon‘s unproduced Wonder Woman screenplay leaked online last month, appearing on sites like Comicbook.com and Screenrant. Due to Whedon’s vocal love of Wonder Woman, many fans viewed it as a tantalizing Hollywood “what if” story. But for some reason, few people mentioned how catastrophically, awe-inspiringly terrible the screenplay actually is.

The script resurfaced on Twitter last night, this time being heavily criticized by female Wonder Woman fans. It’s easy to see why, because this thing is so sexist it’s hard to believe Whedon wrote and submitted it on a professional basis. Constantly sexualizing and demeaning its lead character, it’s like an evil mirror universe version of the movie we eventually got.

Diana’s introduction is the first warning sign, describing her “curvaceous” body instead of her thoughts or personality. It starts an ongoing theme of lurid descriptions of women’s appearances. (Especially their feet. Diana is barefoot in scene one, and we get several foot updates later on.)

Leaked by Indie Ground Films, the screenplay is widely regarded to be the real deal. It’s watermarked for Silver Pictures and dated 2006 (fitting the timeline for when Whedon was hired to write the movie), and it fits Whedon’s distinctive writing style and his own descriptions of the project. Taking place in the present day, it reframes Diana’s origin story as a tale about Steve Trevor crash-landing on Themyscira and teaching Diana how to be “human.”

Rather than focusing on Diana’s strength and compassion, she’s portrayed as an arrogant yet clueless warrior, perpetually disrespected by every man in the film. One scene takes place in a nightclub where Diana confronts the villain Bacchus by—how else?—doing a sexy dance until he notices. The whole thing takes place from a leering male perspective, concluding with men fighting over her on the dancefloor.

Bacchus, when he shows up, is “funky, unassuming,” and “cute in a sheepish kind of way,” with a love of Buffy-esque dialogue and pop culture references. In other words, he’s a typical Whedon stand-in like Topher Brink in Dollhouse, designed to be funny yet pathetic, with a desire to humiliate powerful women before they inevitably humiliate him. (This is one of Whedon’s favorite tropes, echoing the trio of nerdy fanboy villains in Buffy‘s sixth season, and Loki calling Black Widow a “mewling quim” in The Avengers. This time round, we get Bacchus calling Diana a “feisty little filly.”)

The screenplay displays a toxic attitude to Diana, with characters calling her a “bitch” or a “whore,” and commenting on her skimpy costume. Instead of being a feminist paradise, Themyscira is plagued by infighting and a lack of empathy for outsiders, and Diana even fights her own mother. Then there’s Steve Trevor, who overshadows Diana’s role from page one.

ME & MY GIRLS ON OUR ALL FEMALE WARRIOR ISLAND, SPEAKING IN UNISON: "be a man" is something we say all the time, we too aspire to manhood pic.twitter.com/QXFrRm0PjJ

Steve Trevor spends the entire movie mansplaining to Diana, arguing and criticizing her brand of heroism. It’s a startling contrast with Allan Heinberg and Patty Jenkins’ depiction in the real movie, where Steve supports Diana, and the two characters enjoy each other’s company.

In the end, Steve is rewarded with a passionate kiss, immediately followed by a joke about him imagining her kissing the other Amazons. It’s almost as if Heinberg and Jenkins took this screenplay as a “what not to do” manual, and made a film with the exact opposite attitude to Diana’s sexuality, personality, and heroism.

Over the last few years, Joss Whedon has faced more and more criticism from women who loved his earlier work. Buffy is still considered groundbreaking and feminist for its time, but as Whedon’s career progressed, fans noticed some troubling themes. Namely, he’s obsessed with writing waif-like white women who combine physical strength with emotional fragility, and his pop-culture quips often overtake the need for solid characterization. (For instance, Avengers: Age of Ultron introduced a cringeworthy infertility subplot for Black Widow and gave several characters jokes that didn’t fit their personalities.)

But for all that criticism, Whedon isn’t generally considered to be a sexist filmmaker in the same way as, say, Michael Bay. The consensus is that while Buffy remains iconic, he just didn’t move with the times. Written in 2006, this screenplay suggests something worse. Along with being horribly written (“Get yo skank ass offa me,” a gangster tells his girlfriend during the nightclub scene), it portrays Wonder Woman as sexy, arrogant, and unlikeable, constantly dragged down by her love interest’s bitter critiques.

We really dodged a bullet when this screenplay was rejected. The bad news is, he’s now on track to write, direct, and produce the Batgirl movie.