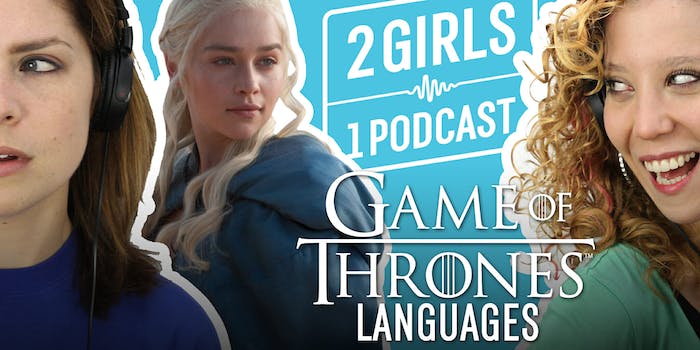 How linguist David J. Peterson created the Dothraki and Valyrian languages for ‘Game of Thrones’

When fantasy TV shows need an alien or elf to speak a fictional language, most writers make up a few foreign-sounding words to pad the script and move on.

But that won’t cut it when it comes to Game of Thrones, a show with details as deep as its fandom. So when George R.R. Martin and the show’s producers needed to build complete, functional languages for Dothraki riders and Valyrian-speaking slavers, they turned to real-life linguist and “conlanger” David J. Peterson. He transformed a handful of phrases from Martin’s books into the grammatically complete languages we hear on HBO today.

This week on 2 Girls 1 Podcast, Alli and Jen (actors who perform weird internet content on stage) chat with Peterson (mostly in English!) about his love of languages, the process of building them from scratch, infusing fictional languages with fictional culture, his email correspondence with George R.R. Martin, and how the complexities of producing TV’s most ambitious show affected his phonetic and linguistic choices—including a little-known error in season 8!

Alli and Jen also speak with a Game of Thrones fan who is currently learning High Valyrian from the language app Duolingo, which has more than 800,000 users actively learning the fictional language.

Minor spoiler warning: While mostly focused on linguistics, this episode contains general discussions of characters, cultures, and events in Game of Thrones.

Special thanks to Michelle Jaworski for production assistance.