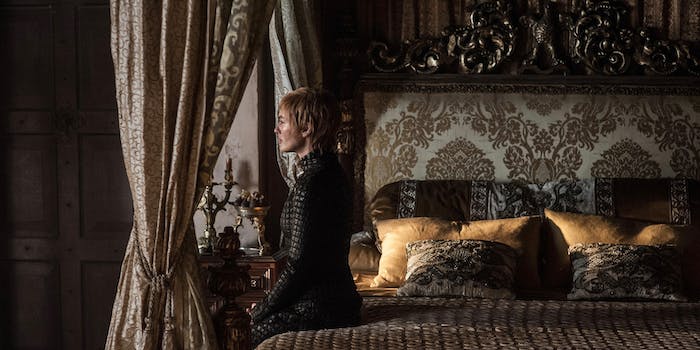 It's haunted her for years.

The fate of Westeros will probably rest on the shoulders of the prophesied Prince That Was Promised who will save the Seven Kingdoms from the darkness. But as fans debate the identity of that savior, there’s at least one more prophecy still hanging in the balance on Game of Thrones.

Unlike many of the characters on the show, Cersei Lannister has seen the power of prophecy with her own eyes. She’s witnessed much of a prophecy about herself come to pass, and although it’s not clear whether it was self-fulfilling or mystically meant to be.

First introduced in season 5 of Game of Thrones and in the novel A Feast for Crows, Cersei’s prophecy doesn’t have a proper or fancy name. The Game of Thrones YouTube channel calls it simply “Cersei’s Prophecy.” Whereas the Prince That Was Promised offered a list of qualifying factors for a preordained savior, Cersei’s prophecy foretold her own future. She has had years to dwell on it as pieces slowly came to pass. The more she tried to stop it, the truer it became.

But how much of it has already happened? And if part of a prophecy is only mentioned in George R.R. Martin’s A Song of Ice and Fire, does it still apply to her Game of Thrones counterpart?

Cersei’s visit to Maggy the Frog

Thanks to Bran Stark’s visions over the past two seasons, we’ve now seen plenty of flashbacks on Game of Thrones. But it wasn’t until season 5 that the show started including flashbacks—and it wasn’t Bran who got first dibs. It was Cersei.

As a young girl, Cersei and her friend Melara Hetherspoon walked to a hut in the woods to see a witch after hearing rumors that she could see the future. Although Maggy, who Cersei rudely woke up, warned Cersei about the perils of hearing about your own future, Cersei demanded she tell her anyway.

Although Game of Thrones doesn’t show us how young Cersei reacted to the prophecy at the time, she still thinks of it years later. By the beginning of season 6, Cersei believed that it would all come true.

“Everything she said came true, you couldn’t have stopped it,” Cersei told Jaime Lannister years later. “This prophecy, it’s fate.”

And in the books, Cersei sees its foretelling for herself: When Melara asked if she would marry Jaime, Maggy told her she would die that night. And sure enough, Melara drowned in a well shortly after, although it’s implied that Cersei pushed her down it. But the point is, Maggy knew.

The first thing on Cersei’s mind is an upcoming marriage prospect. She’s told that she’s been promised to the prince, Rhaegar Targaryen, so naturally, she wants to know when it’ll happen.

Unbeknownst to Cersei at the time, King Aerys II Targaryen and her father Tywin Lannister’s relationship was on the rocks by the time Cersei found out that she had been promised to Rhaegar. Aerys, who by then was starting to show signs of madness, saw Tywin’s suggestion of Cersei as a bride for Rhaegar as a way for Tywin to gain even more power.

Eventually, Cersei would marry the king—but it wouldn’t be Rhaegar, who died at the Trident during Robert’s Rebellion. She would marry Robert Baratheon instead shortly after he was crowned king and remained unhappily so until his death in season 1.

Hearing that she’d marry the king, something clicked in Cersei’s head. Maybe it wasn’t something she wanted before, but now the opportunity presented itself. Would that mean she’d be queen?

“Oh yes, you’ll be queen,” Maggy told her. “For a time. Then comes another. Younger. More beautiful to cast you down and take all you hold dear.”

For the first several seasons of Game of Thrones, it meant simply that Cersei would be queen alongside King Robert. She would also serve as queen regent for two of her children, Joffrey and Tommen Baratheon. But the season 6 finale offered a different way to look at this: Maggy may have meant that Cersei would become queen in her own right. (It’s unclear if her coup d’etat against the Faith will also occur in the books—her story stops just after she completes her walk of atonement—but anything is possible.)

The second part of this, however, demonstrates just why Cersei was so vicious toward both Sansa Stark and Margaery Tyrell for so long. They were both in a position to become that younger and more beautiful queen to take away everything Cersei loves. Sansa was betrothed to Joffrey for Game of Thrones’ first two seasons, whereas Margaery married Joffrey (and later Tommen) to become queen of the Seven Kingdoms. Margaery even attempted to manipulate Tommen into sending Cersei to Casterly Rock, and part of Cersei’s coup was enacted to take power away from Margaery.

Both Sansa and Margaery live in the books and Daenerys is still in Essos. But on the show, the queen threatening Cersei’s reign is obvious: Sansa’s content ruling Winterfell in Jon’s stead (for now), so the only young and beautiful queen standing in Cersei’s way is Daenerys.

At this point, Cersei’s future holds both good and bad fortunes. She knows that she’ll end up married to a king and she’ll be a queen, but she’ll also be taken down one day. But what of their children?

“The king will have 20 children, and you will have three,” Maggy said. “Gold will be their crowns, gold their shrouds.”

Cersei is confused at first, but fans know exactly what Maggy is talking about. The discrepancy in the number of children she and Robert have is a simple one: Robert has nearly two dozen bastard children in Westeros—Gendry’s the only one we know is still alive—while Cersei’s three children (all with golden hair) were fathered by Jaime. But unfortunately, Cersei would live long enough to see all of them die both because of her actions and their own.

Joffrey, considered a monster by most, died from poison by the hands of Olenna Tyrell, the Queen of Thorns, in season 4’s “The Lion and the Rose.” (Olenna waited until she was close to dying to reveal this to Joffrey’s father, Jaime.) He died painfully and violently in Cersei’s arms. Three seasons later, Olenna would admit to poisoning Joffrey to Jaime after being poisoned herself.

Myrcella was also poisoned with a kiss from Ellaria Sand in the season 5 finale, “Mother’s Mercy.” She would die in her father’s arms soon after telling him she knew the truth behind her parentage—and that she didn’t care. In season 7, Cersei eventually got her revenge: She forced Ellaria to watch her daughter Tyene die by the same poison administered to Myrcella.

And Tommen would soon follow. Cersei kept him safely in the Red Keep after wildfire took down the Sept of Baelor and everyone in it, including his wife Margaery, but after the Mountain left his post, Tommen took off his crown and jumped out the window. While there wasn’t really anyone to take revenge on, Cersei later told Jaime that Tommen betrayed her.

Now that Cersei is pregnant in Game of Thrones’ seventh season, what does that mean for her pregnancies from here on out? It’s unclear, but assuming that Cersei survives the White Walker threat, it might not bode well. She told Catelyn Stark in season 1 that she and Robert lost their first child, “a little black-haired beauty,” after he caught a fever—the only child they ever produced together. This unnamed child doesn’t exist in the books, although Cersei admitted to Ned Stark in A Game of Thrones that Robert got her pregnant once but she didn’t keep the baby.

What about the valonqar?

Maggy’s prophecy to Cersei ends with the revelation that she’ll see all of her children die, but as book fans know, there is another aspect to it that Game of Thrones left out (or didn’t show).

“And when your tears have drowned you, the valonqar shall wrap his hands about your pale white throat and choke the life from you,” Maggy warned her.

Cersei learned later that valonqar means “little brother” in High Valyrian. Although some suspect the term is gender-neutral—like we saw with the Prince That Was Promised—it doesn’t appear to be the case here. (If it is a woman, Arya, Sansa, and Daenerys could be potential candidates.) It’s also unclear if the valonqar is Cersei’s little brother or someone who is a little brother like Sandor Clegane.

But for the most popular and likely candidates, look no further than the Lannister cloth. Cersei already disliked Tyrion because she believed he killed their mother, but the possibility that he would one day kill her fueled even more hatred. She also feared what he might become, giving Tyrion all the motivation he needs to potentially kill her.

Meanwhile, she has never feared Jaime, who is also her younger brother. Although they love one another, Jaime eventually left Cersei in the books—something he has yet to do in the show. Some believed that Cersei’s cruelty toward Ellaria and Tyene Sand would be the final straw for Jaime, but for now, he’s still at his sister’s side.

As far as we know, the valonqar card isn’t in play, but some fans still suspect that Jaime will ultimately have a hand in Cersei’s downfall—and perhaps even echo how he killed the Mad King. But given what little of Maggy’s prophecy remains to be fulfilled for Cersei, her future doesn’t look very bright.