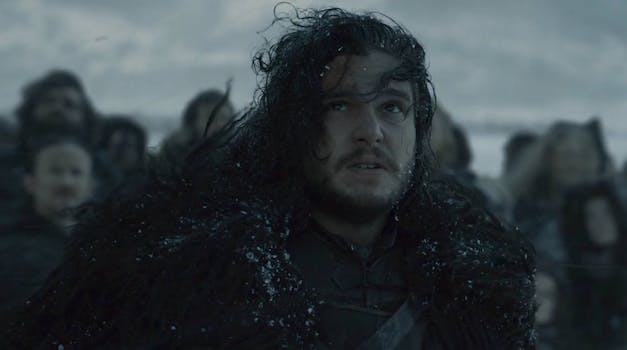 ‘Game of Thrones’ finally revealed its biggest twist to date

After 10 months of speculation, questions, and pushback from HBO, we finally know what happened to Westeros’s favorite bastard. And what a way to reveal it.

For someone who originally wasn’t supposed to show up in season 6, Jon’s corpse has had plenty of screen time in Game of Thrones this season. The Night’s Watch just left Jon Snow’s body in the snow instead of burning it in the debut episode “The Red Woman,” allowing Ser Davos Seaworth, Dolorous Edd, and a few other Night’s Watch brothers to carry him inside. Edd went to seek help while those loyal to Jon did their best to stall. Jon, meanwhile, remained dead.

Toward the end of “Home,” the second episode of the season, Melisandre attempts to resurrect Jon after Davos asks her to try. Melisandre says the words, but it doesn’t appear to work. Feeling dejected, everyone leaves except Ghost—ever a loyal direwolf—who stays to keep watch.

Then, in a moment we’ve all been waiting for, Jon miraculously gasps to life, and the credits start to roll.

Jon’s resurrection will likely shock many fans. Sure, they may have pressed the question of whether Jon is truly dead for months like the rest of us, but they might not have thought it possible for him to come back. As for the people who have followed Game of Thrones online during the off-season, it’s a much different story. The shock might not be from the fact that it happened, but rather that it might answer a question from the books, which haven’t gotten to this particular reveal yet.

We might have the answer to the biggest question going into season 6, but so many more questions are ahead of us.

When a particularly grueling or shocking Game of Thrones episode airs (something that seems to happen every week), there will often be interviews with the writers or cast members involved with a particular twist or controversial storyline. But when Kit Harington and Dan Weiss plainly stated that Jon was dead last June, fans started pushing back.

As far as the comments from the showrunners go, you can argue that technically they were telling the truth. Yes, Jon was dead. They didn’t say anything about him staying dead.

“I’m not coming back,” he told Entertainment Weekly last June, which he immediately disproved with his reappearance as a corpse.

Add on months of hair obsession (he keeps it long for the role) and spotting Harington on-set, and you’ve got an audience that doubts those “Jon Snow is dead” statements the more they hear them. Nobody wins.

In an interview with Entertainment Weekly, Harington apologized for lying to fans about Jon’s death for the past 10 months.

“I’d like to say sorry for lying to everyone,” he said. “I’m glad that people were upset that he died. I think my biggest fear was that people were not going to care. Or it would just be, ‘Fine, Jon Snow’s dead.’ But it seems like people had a, similar to the Red Wedding episode, kind of grief about it. Which means something I’m doing—or the show is doing—is right.”

Will people stop seeking out those postmortem interviews? We’ll have to wait and see if the fallout from Jon’s resurrection will reach Walking Dead levels, but people might not trust them as much in the future.

2) How will everyone else take it?

This is one of those major twists where we don’t have the books as precedent—although there was plenty of book evidence to support it.

Back in season 3, the red priest Thoros of Myr told Melisandre about his crisis of faith before he resurrected Beric Dondarrion for the first time. Since then, he’s been able to bring him back multiple times, including after he was killed by the Hound in “Kissed By Fire.”

While Dondarrion’s men loyally followed him, Jon’s resurrection might not be as well received. Just look at the people who encountered him in the preview for the next episode. Tormund says, “They think you’re some kind of god.”

Jon was killed by the very brothers who committed mutiny against him. They thought he was a danger after he allowed the wildlings to pass through the Wall and settle on the other side. Now that he’s been brought back from the dead by magic (and perhaps no longer beholden to his Night’s Watch vows)? The Night’s Watch might not want anything to do with him.

First, we presume Jon has to get used to being alive again. After that, it’s anyone’s guess, although set reports certainly indicate where Jon’s plot will take him this season.

Later this season we’ll see the show’s biggest battle to date take place in the North. It will pit the Boltons and the wildlings against each other, while other major players like Davos and Sansa Stark likely will play important roles. It’s being referred to as the “Battle of the Bastards,” even though the show has only hinted at the possibility of the battle so far.

On one side is Ramsay Bolton, the bastard son of Roose Bolton, who was legitimized by King Tommen Baratheon. He really wants his wife Sansa back to give his claim to the North legitimacy. On the other, it’s Jon Snow, the bastard son of Ned Stark (although fans have often speculated about Jon’s real parentage), who may have Davos and Melisandre on his side. And he might not be wearing the black of the Night’s Watch.

And lest we forget, Game of Thrones revealed Jon’s return to form weeks ago in the show’s first trailer—which has since been deleted.