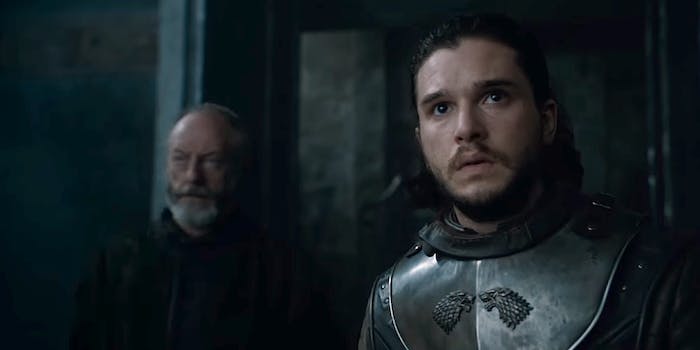 We've been waiting since the beginning for this.

We’ve already gotten two big (and long-awaited) reunions so far in Game of Thrones season 7, but the preview for next week’s episode teases what might be the most important meeting in the show—and in the Seven Kingdoms.

Viewers knew that Jon Snow planned to travel to Dragonstone after receiving ravens from Tyrion Lannister and Samwell Tarly, and we saw him and Davos Seaworth leaving Winterfell in “Stormborn.” We won’t have to wait long for him to arrive: The preview for episode 3, “The Queen’s Justice,” shows him stepping into Daenerys Targaryen’s throne room in Dragonstone to speak with the queen.

After seven seasons on the air, Jon and Daenerys will finally meet. Even as the show’s end game makes these major character meetings more commonplace, this anticipated moment between Jon and Dany is particularly special.

Even EW ships Jon/Dany. Come on GRRM, get with the programme. pic.twitter.com/8C3TqQwn3w

But bringing Jon and Dany together isn’t just a massive piece of fanservice for viewers who’ve waited years for this—though it will probably head into that territory no matter how it plays out. It’s massively important to the plot, the endgame, and their destinies.

Jon may be King in the North, but so far he’s shown little actual interest in the war for Westeros. He’s seen the true enemy, and he’s spent the past two episodes trying to prepare the North for that fight if and when it comes to their doorsteps. Children—both boys and girls—as young as 10 are learning to fight. Jon’s attempting to find all of the dragonglass he can get his hands on, something that that ultimately compels him to head to Dragonstone.

True, he does receive a summons from Daenerys via Tyrion, who Jon met all the way back in season 1. It even includes a line Tyrion said the first night they met as a way to prove to Jon it’s really him: “All dwarves are bastards in their father’s eyes.”

“The Seven Kingdoms will bleed as long as Cersei sits on the Iron Throne,” Tyrion writes. “Join us. Together we can end her tyranny.”

The letter makes no mention of the other reason Dany wants to speak to Jon. (More on that in a bit.) Jon, however, is still wary. Tyrion’s letter casually mentions the Dothraki horde and army of Unsullied under her command, her alliances with Dorne, the Reach, and an Ironborn fleet, and her three dragons. Even if Tyrion is being truthful (and both Jon and Sansa can vouch for his character) and even if Dany would be a useful ally to fight the threat beyond the Wall, it’s still risky. So Jon does nothing.

That changes when Jon receives a letter from Samwell Tarly telling him of the mountains of dragonglass located in Dragonstone. He could ignore the first letter, but Dany is between him and the weapon that could destroy the White Walkers. Jon Snow is finally going to have to get his hands dirty in Westerosi politics.

Despite objections from the Northern lords and Sansa, who calls Jon out for “abandoning your people,” Jon decides to accept and leaves Sansa in charge of Winterfell.

“Daenerys is a queen,” Jon explained. “Only a king can convince her to help us. It has to be me.”

Though Sam’s letter is the one that convinces Jon to ride south, it’s Dany’s meeting with Melisandre early in the episode that kicks it off.

On a dark and stormy night—much like the one on the day of Dany’s birth—she speaks to Melisandre, who came to Dragonstone after being exiled from Winterfell last season. Speaking in High Valyrian, Melisandre tells her that the Long Night is coming and that the Prince That Was Promised will bring the dawn.

A linguistics lesson from Missandei reveals what Maester Aemon figured out on his deathbed: the Valyrian word for “prince” is gender-neutral, so it would translate to mean “prince or princess.” So Dany could be the Prince, but so could another. While fans have debated whether Jon or Dany is the prophesied Prince for years, Game of Thrones—for now—is trying to have it both ways.

Melisandre asks Dany to summon Jon Snow. She doesn’t mention the Jon’s death or her role in resurrecting him with aid from the Lord of Light, but she speaks to his knowledge of the true threat in the far north and his role in uniting wildlings and the Northern houses alike. Tyrion can vouch for Jon, noting that Jon has more reason to want Cersei dead than even Dany does.

Dany agrees to meet with Jon to hear what he knows and has experienced, but her motive is also one of power. She wants him to bend the knee. Dany’s sights are on Cersei—and may be even more so after the episode-ending sea assault that took out most of Yara Greyjoy’s fleet.

Both Varys and Melisandre often know more than they let on, but as far as we can tell, they don’t know about the biggest bombshell of all: Jon and Dany are related. Jon’s biological father is Rhaegar Targaryen, who is Dany’s oldest brother, which would make her Jon’s aunt.

The sole person on Game of Thrones who knows about Jon’s true parentage—that we know of, at least—is Bran Stark, who’s still at the Wall with Meera and the Night’s Watch. If Bran is heading to Winterfell, he’ll have missed the chance to tell Jon about who he really is. So the meeting will outwardly be one between a queen and a king—one, the Mad King’s daughter, and the other Ned Stark’s bastard.

We don’t know if marriage would be on the line as it is in other alliances, but Jon and Dany marrying could open a can of worms. The Targaryens often practiced incest, but it’s unclear how Jon would react if he were to marry his aunt and then find out about it.

Even without the incest factor, recent clashes between Starks and Targaryens could prove thorny in retrospect. Rhaegar ran away with (or kidnapped, depending on the storyteller) Lyanna Stark, Jon’s mother, who he believes is his aunt. That led Ned and Lyanna’s father and elder brother, Rickard and Brandon Stark, to head to King’s Landing. Dany’s father Aerys had them arrested, and after Rickard demanded a trial by combat, burned Rickard alive. That led to Robert’s Rebellion, which resulted in the deaths of both Rhaegar and Aerys.

While these events deeply marred Ned Stark’s generation of (now mostly deceased) lords, it’s not clear if they’ll have the same potency for Dany and Jon, who were babies at the time.

The Red Woman in the room

Jon and Dany have every reason to align with each other, but Melisandre’s presence at Dragonstone could complicate things. She may have advised Dany to summon Jon, but she might not have anticipated Davos going with him.

Davos discovered that Melisandre had a role in Shireen Baratheon’s death and wanted to kill her outright, but Jon showed her mercy. He banished her, pledging that she would be “hanged as a murderer” if he saw her in the North again; Davos promised to execute her himself.

However, neither Jon or Davos are prepared for what they’ll do if they see Melisandre again in Dragonstone. On one hand, she is a murderer. On the other, Melisandre would likely be a guest of Daenerys. Harming her would probably be seriously frowned upon under guest right, and it could cause a lot of contention between Jon, Davos, and Dany.

Melisandre’s presence alone could set their relationship off to a rocky start, but given the threat in the far north, they might have to persevere anyway. The fate of the Seven Kingdoms depends on it.