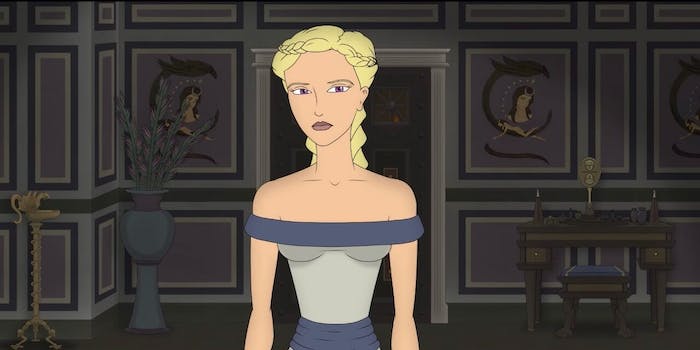 It could answer one of that world's biggest mysteries.

In forming A Song of Ice and Fire and the world around it, George R.R. Martin has created thousands of years of imagined history for Westeros, Essos, and the many rulings families and creatures who live there, providing plenty of fodder for the five prequel series in the works that could succeed Game of Thrones. But one popular and potential show idea has already been created in the form of an animated pilot.

Patrick McCarthy, the creator of Stewie Potter, spent two years creating an animated pilot based on the Doom of Valyria, a mysterious event that led to the downfall of the Valyrian Freehold. On the day of the Doom, hills exploded and broke Valyria up into islands, made all of the mountains expel lava, and killed all of the dragons. It’s still cursed to this day and occupied by Stone Men (those succumbing to greyscale) sent there to die. Tyrion Lannister and Ser Jorah Mormont crossed through it in season 5, resulting in Jorah becoming infected with greyscale.

However, not everyone from Valyria perished. Twelve years before the Doom, Daenys Targaryen (who was called Daenys the Dreamer) had a prophetic dream about the Doom and warned her family. The Targaryens left Valyria with their wealth and their five dragons and headed to Dragonstone, which was then a Valyrian colony.

One of the World of Ice and Fire’s biggest mysteries forms the basis of McCarthy’s unofficial spinoff, which he hopes HBO will purchase and produce. The pilot sets up many of the major characters in Valyria and uses a Stark arriving in Valyria with a maester on the eve of a Targaryen wedding to open up the world.

We don’t know if HBO is already working on a Doom of Valyria successor show or if it would be interested in purchasing McCarthy’s concept, and it definitely takes some liberties. But there’s no question it would make a hell of a show.